Splatoon‘s pop-star mascots, Callie and Marie, are taking to the stage once again on August 7th during the Japan Expo in Paris.  Nintendo held their first Squid Sisters concert in Chiba City, Japan this past January to celebrate Splatoon surpassing 1 million sales worldwide.  For those who were not able to attend the show, the concert was also broadcast live on Niconico, before being uploaded to YouTube with full translation (the Japanese parts, not the squid parts).  You can see that concert above.  Currently, there has been no news if the concert will be streamed live for the Paris Show. 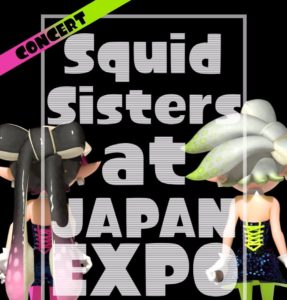 Anyone planning to go to this concert?  Would you be interested in the Squid Sisters showed up in a town near you?  Let us know in the comments below.