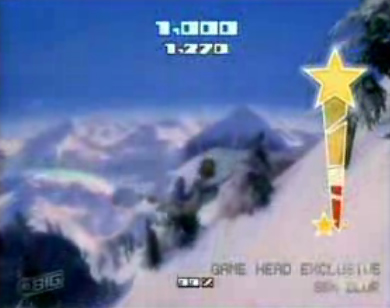 EA released the world premiere trailer showing SSX Blur for Wii. The trailer shows some great gameplay, but there was no mention of gameplay–until today. EA announced today that SSX Blur is a Wii exclusive! They also said the game will take full advantage of the Wii’s motion-sensing capabilities. Here’s the quote from Alex Hyder, SSX Blur Producer:

“We wanted to take the soul of the franchise—the air, the speed, the tricks, the fun—and Wii-ify it. You’re going to see that reflected in the On-the-Ground & In-the-Air controls, the characters, the user interface, and every other aspect of this game.”

Great news for Wii fans as more and more developers jump on board with exclusive titles. Here is the link to the full trailer on youtube: SSX Blur Trailer

PS: Sorry about the Blur-ry picture ;) I grabbed it from the video.