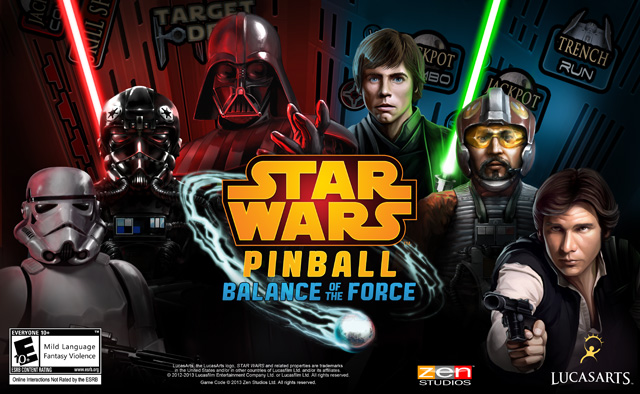 [expand title=”Click here for the full press release”] There are new Star Wars™ tables on the way! Star Wars™ Pinball: Balance of the Force will be available later this fall, featuring three brand new Star Wars themes: Star Wars: Episode VI Return of the Jedi, Starfighter Assault and a tribute table based on the notorious Darth Vader.

Help the rebellion destroy the Sith and the fearsome Death Star in the Star Wars: Episode VI Return of the Jedi table. Aid Luke Skywalker, Han Solo, Chewbacca, Princess Leia, Lando Calrissian, R2-D2,and C-3PO in their fight against the Sith in order to restore peace to the galaxy.

Pay tribute to the Dark Lord of the Sith in a table dedicated to Darth Vader. Use the dark side of the Force to mercilessly pursue the Jedi and Rebel Alliance and face off with Obi-Wan Kenobi and Luke Skywalker.

Support the Rebel Alliance’s Fleet or the Galactic Empire’s Armada, as you lead your side to victory in Star Wars™: Starfighter Assault. The table features legendary Starfighters like the X-wing and TIE Fighter, and iconic vessels like the Millennium Falcon and the Death Star II.

The fate of the galaxy is in your hands! Star Wars™ Pinball: Balance of the Force will be available as DLC for existing Star Wars Pinball games and Zen Studios pinball platforms on digital stores including Xbox LIVE® Arcade, Steam, PlayStation®Network for PlayStation 3 and PS Vita, Nintendo Wii U eShop, Apple App® Store, Google Play™, Windows 8, Mac App® Store and Kindle Fire HD.

May the Force be with you!
[/expand]