When discussing seminal Video Games, “Sweet Home” isn’t a title that gets brought up into conversations. After all, it isn’t a title synonymous with gamers. The reason for the game’s obscurity is that it never saw the light of day in the West, which is unusual considering that it inspired one of the biggest video game franchises of all time and laid down the foundations for an entire genre of video games that succeeded it.

Released by Capcom, solely for the Japanese Nintendo Famicom system, in December of 1989 and based off the movie with the same name (also only released in Japan), Sweet Home is a rather odd mix of genres. Part puzzle-solver, part RPG and part Survival Horror. The game feels like an unusual 8-Bit mash-up of Zelda, Final Fantasy and Resident Evil series. The comparison to Resident Evil isn’t coincidental. Sweet Home is considered the grandaddy of the Resident Evil series, and to an extent, the Survival Horror genre as a whole. In fact, it should be noted that the first Resident Evil was intended as a remake of Sweet Home altogether, and when playing through the game, the similarities become very apparent. 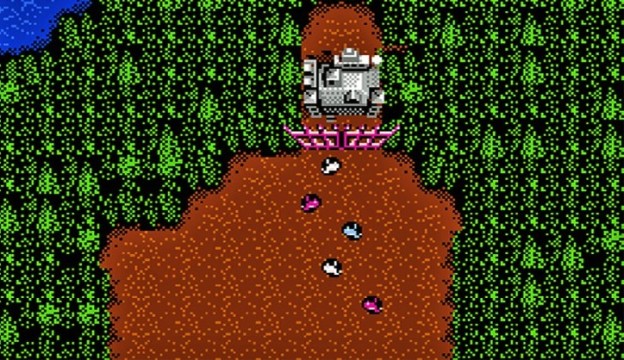 What IS this place?

The game opens with a group of individuals approaching a seemingly abandoned home buried deep within a thick forest. Sound familiar? However, unlike the S.T.A.R.S. team from Resident Evil, the characters consist of a Television crew seeking rare and sought after collectibles belonging to the late artist Ichirō Mamiya; who, before his death, hid a series of frescoes in the dilapidated home. Don’t let the Lynyrd Skynyrd tribute band name throw you off. The “Sweet Home” of the game is far somewhere you’d want to visit. Mamiya’s mansion is haunted by the ghost of his late wife, and she’s far from welcoming. Besides Lady Mamiya, the mansion is teeming with a great manner of ghouls, traps and puzzles that the crew must overcome in order to find the frescoes, and make it out alive.

The group of fortune hunters consists of 5 members, each of whom have a unique item or ability. For example, the team leader and producer of the documentary, Kazuo Hoshino has a lighter. Ryō Taguchi is the cameraman wielding a camera right down to Asuka who wields a vacuum cleaner. Yes. That’s right. I must point out in order to save Capcom from a barrage of complaints that this isn’t a sexist joke, Asuka is an art restorer who uses the vacuum to clean up frescos. Apparently.

Remembering who possesses which ability is one of the main challenges in the game, partly down to the Japanese names. Don’t get me wrong, I watch and play my fair share of Japanese media, but remembering six Japanese names and they’re abilities isn’t easy. Akiko Hayakawa and Emi Hoshino don’t stick in the brain quite as firmly as “Chris Redfield” or “Jill Valentine”. Luckily, the game allows you to rename each character. So, to speed up gameplay, Ryō can be named “Camera” and Asuka can be renamed “vacuum” or “Dyson” if you’re feeling creative. Naming the characters in this way certainly speeds up the puzzle solving portions of the game. Each item plays a key role in advancing through the game. The lighter is used to carry out actions such as burning ropes and obstacles, the “key” opens the doors around the mansion, and the vacuum cleans dusty murals as well as removing broken glass from the floor, because the team came without footwear it would seem. The item system would directly influence the very mechanics of Resident Evil as players choosing to play through RE1 as Chris Redfield’s would be equipped with a lighter just like Kazuo, whereas those who play through the campaign of Jill Valentine, would be able to unlock otherwise inaccessible doors. After all, she is the master of unlocking. 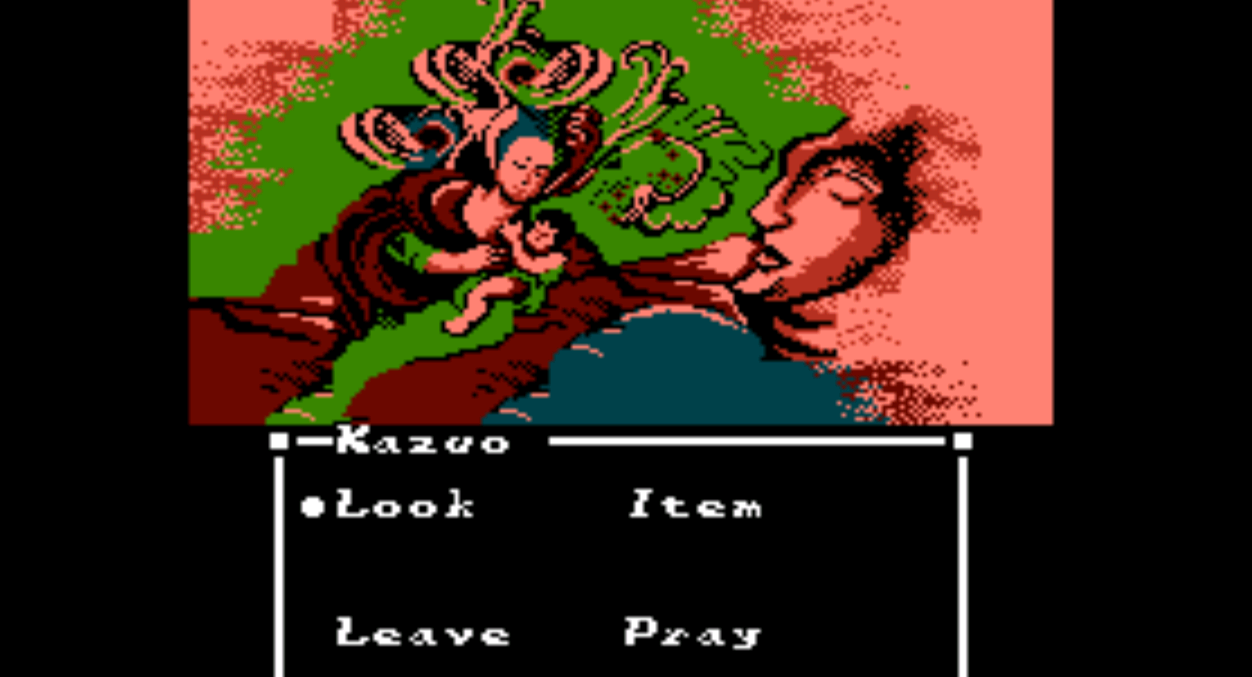 One of the famous frescoes. Not sure what all the fuss was about…

The item collecting and inventory management well known to fans of the Resident Evil series also plays an equally important role in Sweet Home. With each character having inventory slots, choosing which key items to pick up and which to leave behind will be a major brain teaser. It’s moments like this that feel remarkably similar to stumbling upon a green herb whilst exploring the Spencer Mansion and the tough decision of leaving an item behind, or using up a precious resource in order to make room for it can be just as significant in Sweet Home as they are in Resident Evil.

Just like in Resident Evil, progressing through the game requires a great deal of exploration and puzzle solving. However, one of the most notable differences between Sweet Home and its Playstation 1 successor is the battle system. Unlike Resident Evil, fighting enemies doesn’t involve your character holding a shotgun up to the heavens in order to blow a zombies head clean off its rotting carcass, but instead, enemies are fought in the form of a turn based battle and are triggered through random encounters. The protagonists can attack, use their designated special item, run away or “pray” which acts as the equivalent of a magic attack. In this sense, the battle system in Sweet Home is more visually comparable to the likes of Dragon Quest. The disparity between Sweet Home and many other 8-Bit RPGs is that when a character dies during a battle they cannot be revived for the entirety of the game. Forget stocking up on Phoenix Downs or Revives; in Sweet Home, there is just the bleak reality of permanent death at the hands of an “Evil Doll” to mull over. Should you lose a character, the game can still be completed as items will appear in their absence. For example, losing your nurse, Akiko, will result in health items being found instead. 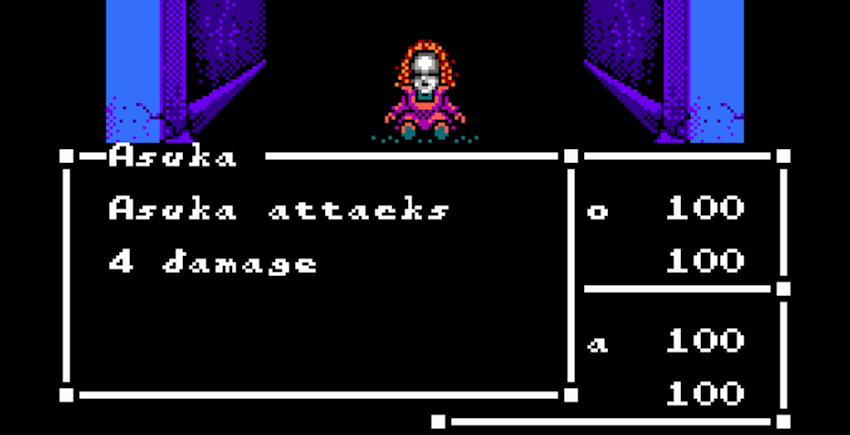 Evil Dolls – the stuff of nightmares

Sweet Home never managed to cement its name into the annals of video game history. Despite being an extremely ambitious title for the time of its release, unfortunately the technological limitations hindered the game from being quite the fright fest it set out to be. The game can’t be faulted for what it achieved, especially for a movie adaption (because we know how those usually turn out), and the game still manages to be one of the most fun adventures on the Famicom. Sweet Home didn’t have the luxury of pre-rendered backgrounds and polygons like its predecessors to make the experience a truly frightening one, but instead did a great job making up for the lack of scares by literally killing your characters off. If an 8-Bit ghoul doesn’t get your hair standing on end, surely having your team slowly dropping off one by one will. It’s a great way to compensate for the system’s limitations and the lack of truly horrifying visuals and atmosphere. Not only is the concept of permanently losing your team embers a remarkably unique one, Capcom went one step further and included multiple endings depending on who you finish the game with, a revolutionary feature to say the least. 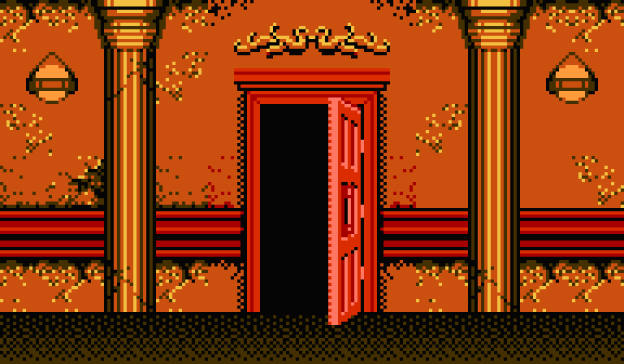 Sweet Home’s limited release prevented it from receiving the attention it truly deserved, but thankfully it inspired a myriad of games in its wake. Elements of Sweet Home can be found in just about any Survival Horror game that followed it, and its setting, plot, mechanics and even cinematic touches (such as the door opening animations) brushed off on Shinji Mikami when creating his groundbreaking Horror Classic. Capcom rightfully dropped the “Sweet Home” title when re-branding the franchise, especially for targeting a Western audience, and Resident Evil eventually evolved into its own separate entity entirely. However, without Sweet Home, there would be no Resident Evil, Silent Hill, and countless other Survival Horror classics. For that reason alone, Sweet Home should be lauded by Video Game fans and critics alike.