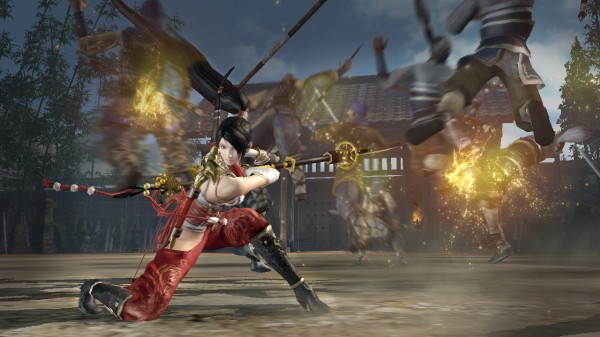 BURLINGAME, Calif. – November 16, 2012 – The largest assembly of Warriors ever! Today TECMO KOEI America announced that the hotly anticipated action game WARRIORS OROCHI 3 Hyper will be available at retailers nationwide this Sunday, November 18th for the launch of the Wii U™.WARRIORS OROCHI 3 Hyper combines the much loved heroes of the Dynasty Warriors and Samurai Warriors series in a story that also features characters from Ninja Gaiden, Warriors: Legends of Troy, Bladestorm, Trinity: Souls of Zill O’ll and Dead or Alive, as well as brand new characters!

Years after the battle against Orochi, the Serpent King, the heroes of the Three Kingdoms and the Warring States struggle to seize control of the new universe they were thrown into when a new threat arises! A terrible and colossal monster, resembling a serpent with eight heads, casts its shadow across the land and defeats most of the brave warriors.

The ones that survived, assisted by the mysterious Kaguya, travel back through time to save fallen heroes and forge new alliances, collect powerful weapons and build an army so they can have a chance to defeat the terrible Hydra.

The features of WARRIORS OROCHI 3 Hyper include:

“The release of WARRIORS OROCHI 3 Hyper gives fans the biggest cast of characters to play on the new Wii U,” said Amos Ip, SVP and General Manager of TECMO KOEI America. “With a new versus ‘Duel Mode’, in-depth upgrade and bond systems, and customizable and shareable scenarios,WARRIORS OROCHI 3 Hyper is packed with content for Tecmo Koei fans.”