Temple of Yog is a 2D top-down indie game that surprised me with it’s unique use of the GamePad, handcrafted art style, and some great music to boot. However, Temple of Yog possess several glitches which causes the title to be almost unbearably frustrating.

Through the short tutorial stage, you are introduced to some but not all of the game controls – the rest I came to figure out on my own over time. There isn’t much to the video game, however, it is rather challenging later in the experience which is mostly due to in-game glitches that force you out of your comfort zone. The premise of the video game is very simple yet complex. Your goal is to reach 20,000 boon (points). There are a variety of ways to earn boon: 100 boon for killing a piranha plant look-alike, 200 for a spider, 250 for the dog and so on. Temple of Yog also offers challenges to the individual, which depending on the difficulty of the task given, gives different amounts of boons. 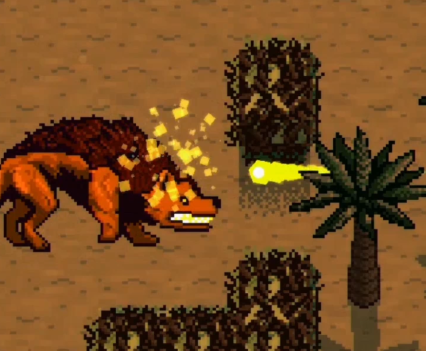 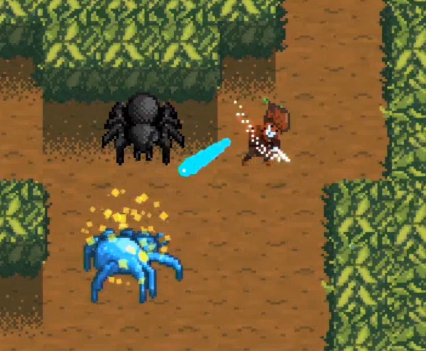 Some of the highlights found within Temple of Yog come from the interesting features it has. One of the most apparent ones being the use of two worlds; one on the TV, and one on the GamePad. The hidden dark world which lies below is used in both getting points, and progressing past obstacles in the world above. Temple of Yog does this well which is good because it’s the main gimmick. You can switch between which screen(GamePad or Wii U) shows the light world and is subsequently the main screeb. One of the other interesting things I found was the history system which auto generates your character as you progress and records your stats for each life.

While playing Temple of Yog, I found a multitude of Glitches. Among the most annoying of the bunch was enemies that are not supposed to walk through walls. I quite often found myself in the predicament that a spider or dog would walk through a wall and attack me. When this glitch happened, the enemy would continue chasing you until you either, got to the next level, or died or killed it . The Second most annoying glitch, which thankfully didn’t happen as often, was the inability to exit to the next level – You couldn’t use the shadow world to get there either. The last major bug I found lead to premature deaths and disadvantages over enemies as they would begin attacking the moment I spawned. This bug made me feel that the game was to blame for my death rather than my own actions.

Even though the game is a throw back to the older generation of gaming such as The legend of Zelda, this game does not do those beloved games justice because of the almost nonexistent soundtrack and glitches a plenty,  which leave the game at a much lower quality than expected. However, with that in mind, if the developer fixes all the bugs, maybe the next iteration in the series will be worth the purchase.

The Way I See It | Temple Of Yog Review

If the game was longer and had less major glitches, it would have been a worthwhile purchase.