The Candidates And Their Views On Video Games Part One With just 3 weeks until (Nov 4th)  presidential elections in the United States. Many of you probably already know who you are going to vote for, but there is a few out there who are still undecided. I have spent the last 3 months, emailing this person and that person, trying to get a comment from the Obama and McCain campaign, to have them answer questions about their stand on different gaming issues. To my despair I was never gotten back with. I decided to venture out on my own to find the dirt on what these candidates, and what they have said about videogames. In my original draft of this post I had added my own thoughts. To stay as bias on this subject, and to just stick to the facts, I have admitted my musings. The first of a two part series is going to focus on Democratic Candidate Barack Obama.

This first quote was taken back in December 2006, from a panel discussion with the Democratic hopefuls.

“To date, nearly 10 states have considered legislation to keep violent video games out of kids’ hands. Would you support this type of legislation at the federal level? What other strategies would you support to keep the video game industry and other media companies from marketing and selling inappropriate content to children?

Barack Obama, D-IL: We need to give parents the tools and information they need to make choices about what programs their children are watching or what video games they are playing. As we move towards a digital environment, there is a golden opportunity for the industry to do this on their own—to use the latest in technology to give parents more information and more choice. For example, this technology could make it possible for parents to create their own family tier just by programming their television to block certain channels, block certain genres of programming like dramas, or block television at certain times of the day. The same can be said of video games, especially as we’re moving into an era when they can be downloaded as easily as today’s movies and television shows.

I would call upon the video game industry to give parents better information about programs and video games by improving the voluntary rating system we currently have. Broadcasters and video game producers should take it upon themselves to improve this system to include easier to find and easier to understand descriptions of exactly what kind of content is included. But if the industry fails to act, then my administration would.

And even if the industry does do some responsible self-policing, there’s still a role for the federal government to play. We need to understand the impact of these new media better. That’s why I supported federal funding to study the impact of video games on children’s cognitive development.

This second quote was said in-front of an Austin Texas youth group, while trying to get them involved about politics and in their country.

Obama told the Austin crowd that they should try to recruit their friends to support his campaign. “I want you to tell them, ‘It’s time for you to turn off the TV and stop playing GameBoy,'” Obama said. “We’ve got work to do.”

This was stated in a discussion about our children.

[Obama called for] investments in early childhood education to close the achievement gap, but with an added emphasis on poetry, music and art, not just academics. Obama admonished parents to do their part by turning off the television, putting away the video games, and instilling in their children a desire to get a good education.

I just found this picture right before making this post. Take a look at who is in-game advertising. 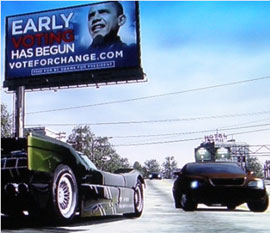 Just found out that Obama has ad’s not just for Burnout 3, shown above, but for 18 other titles, including GH and Maden.

Stay tuned for part two were we will cover John McCain and his views.

All quotes were taken from game politics.com.