PN Review: The Legend of Zelda: Oracle of Ages/Seasons

I’m pretty sure its safe to say that I wasn’t the only Nintendo fan that had a Game Boy. That fantastic little (actually, kinda big) grey brick was the perfect source of entertainment when it came to gaming on the go back in the very late 80’s and early 90’s. One of the best games for said mobile platform was The Legend of Zelda: Links Awakening. This little gem gave gamers that same familiar Zelda feel with some extra elements to better accent the systems capabilities. Plus it was just amazing.

Links Awakening released for the Game Boy in 1993 and it would be eight years until we received the next installment of Zelda handheld games. In 2001, North America received both The Legend of Zelda Oracle of Ages and the Oracle of Seasons. For non-Zelda fans you have to understand, having two Zelda titles release on the same date was a big deal. Not only were these games in color, but both were completely different adventures that at one point would intertwine with each other. Never in the history of Zelda titles had this been attempted. Two Zelda games back to back. Two worlds to save and saving both worlds opened up to a final conflict.

Further more, these titles would be developed by Capcom, the company known for such titles like Street Fighter, Resident Evil and Mega Man. How exactly would they fair when it came to making a Zelda game?

To keep things simple, I’ll separate both games and their respective stories as to avoid confusion. Spoiler free. I’ll go ahead and say that both games start the same. Link is seen riding into Hyrule where he is tasked by the Triforce to aid the land of Holodrum (Seasons) and Labyrnna (Ages).

Link is sent by the Triforce to the land of Holodrum to defeat the evil that threatens the land and the oracle of seasons Din. Shortly after Links arrival, he is greeted by a traveling troupe and wouldn’t you know it, Din is their lead dancer. Everything seems great and happy, until the evil general Onox literally crashes the party, taking Din with him. Capturing Din causes the seasons in Holodrum to flow out of proportion. Some areas are stuck in a perpetual Winter. Some Spring and so forth. Onox has also sent the temple of seasons to the land of Subrosia. Within that temple is Rod of Seasons which gives you the ability to control the seasons which is needed to progress throughout the game. 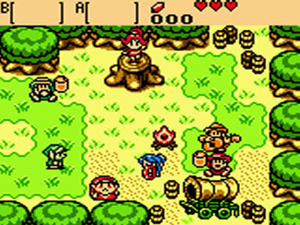 But getting back to Din is not as simple as knocking on Onox’s door and asking nicely. With the aid of the Maku tree, Link must venture to multiple dungeons to gather the essences of nature in order to penetrate Onox’s evil lair.

Just like Oracle of Sesons, Link is sent to a new land by the Triforce, to make things right. This time he is sent to Labrynna to aid its land and the oracle of ages Nayru. When you first appear in Labrynna, you immediately run into Impa who is being attacked by monsters. After the monsters flee, Impa informs you that she needs to find Naryu in order to protect her. After shortly exploring the land, you find Nayru singing to the woodland critters and everything is sunshine and smiles. Well that is until the Sorceress of Shadows, Veran, reveals that she has been possessing Impa this whole time and seeks to take control of Nayru. 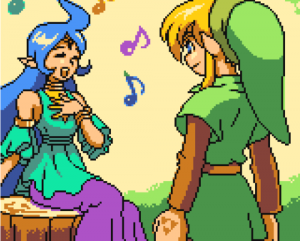 This gives her the ability to control the flow of time thus allowing her to tamper with the past. These effects are noticed almost immediately after she leaves, as some people and animals suddenly cease to exist, some simply freeze in time and so on. Like Oracle of Seasons, there is a Maku tree of the land that gives Link advice on his next goal. But before the Maku tree can even utter one syllable of wisdom, she vanishes before Links eyes. After going through the time portal, Link arrives in the Labrynnas past to save the Maku tree. Once the Maku tree is saved and Link has returned to the present, you find out that the Maku trees memory is a bit fuzzy due to almost being wiped off the timeline. Thus begins your journey to gather the essences of time and to save the land.

Hmmm…Link time traveling to save the land. I feel like we’ve been here before.

I’ll go ahead and say this. If you’ve played Links Awakening, you’re going to feel right at home with these controls. If not and you’ve played Zelda before. Then it may be slightly different, but you’ll feel right at home. Totally new to a Zelda game? Well in that case, you’ll feel right at home. One thing you have to take into account is what the developers had to work with when making these games. The Game Boy Color had as much layouts as an NES controller. You have your D-pad, your start and select button and your A and B buttons. This makes playing the Oracle games, or any Game Boy game for that matter, easy and simple to pick up. 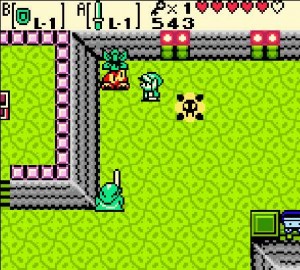 For new handheld Zelda players, the biggest difference here amongst the other titles is your equipment selection. In previous Zelda games, items such as your sword and shield already have their own devoted buttons. In the Oracle Series however, your sword and shield are part of your inventory and can be equipped and unequipped at will. This opens up new possibilities for combining weapons to solve puzzles and advance on in the game. For example: there may be an area that is too big to jump. But with the combination of the Pegasus seeds that increase your speed and the Roc’s feather that gives you the ability to jump, you can traverse larger gaps no problem.

It may seem tedious at first having to switch back and forth between items, but again, the developers had little button space to work with and the idea of interchangeable item placement works perfectly.

Link also has some animal friends this time around. At some point in Links adventure, you’ll come to the aid of Ricky the Kangaroo, Dimitri the Dodongo and Moosh the Bear. Ricky can help Link reach higher platforms, traverse large gaps and can attack using his strong punches. Dimitri can help Link swim over deep water and climb waterfalls. Lastly, Moosh can hover Link over a series of pits and can ground pound to attack surrounding enemies. I’m not sure how exactly a bear can fly, but hey, if he lets me reach new areas I’m happy!

As mentioned earlier, each title has their own unique theme. One dealing with the seasons while the other is based around traveling through time.

In the Oracle of Seasons, your go to item is the Rod of Seasons which well allows you to control the seasons. There are multiple areas throughout Holodrum that can only be accessed depending on the season. Winter can freeze bodies of water and cause snow to pile up. The Summer heat can dry up water and vines to grow high on walls. The dead leaves in Autumn can cover up pits that once stood in your way. Lastly, Spring will cause certain flowers to bloom that can launch Link to higher places.

Meanwhile, in the Oracle of Ages, Link uses the power of the Harp of Ages to travel between the past and the present of Labrynna. Playing the harp can open up time portals at designated areas but throughout the game, the strength of the harp grows allowing you to open time portals at will.

There it is again! An instrument that helps you travel through time. Déjà vu.

If you’re a Zelda fan like me, you noticed the absence of the goddess Farore. She actually makes appearances in both games as the Oracle of Secrets. When you beat either game whether it’s the Oracle of Ages or Seasons, you are given a code to input to take your completion data to the next game. This can cause characters you have seen in either title to appear in said opposite world.

After beating both titles, you are presented with a final quest in order to save the world. I’m not going to say who the last boss is as it is something that you need to experience for yourself. But it wouldn’t hurt to say that you might need the blade of evils bane to get the job done.

The Legend of Zelda Oracle of Seasons and Ages are two fantastic Zelda titles to grace the franchise. Both seasoned Zelda veterans and newcomers alike owe it to themselves to download these titles and set forth on their heroic adventure through the four seasons and time itself. These titles are up for download on the 3DS e-shop for $5.99 each. However for the first three weeks (May 30 – June 20) they will be available for $4.99 per title.

PHOTO CREDIT IN ORDER OF APPERANCE: