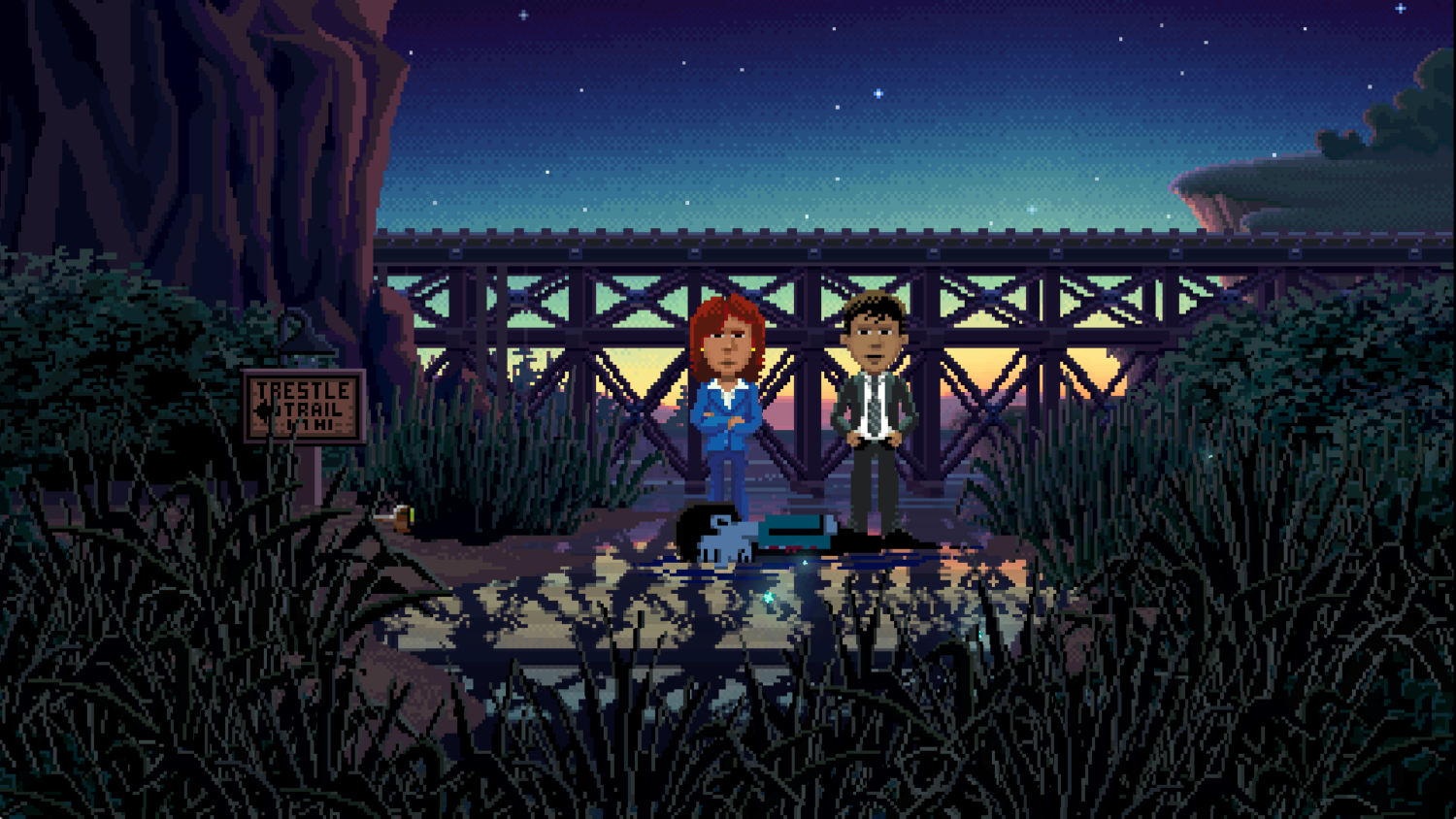 The developers of Thimbleweed Park have announced that the mystery/comedy game is heading to the Switch eShop on September 21.

Thimbleweed Park comes from the minds of Ron Gilbert and Gary Winnick, the creators of classic adventures Monkey Island and Maniac Mansion. The game is set in 1987, where things seem to be very strange. There’s a dead body under a bridge, a haunted hotel, a giant pizza slice roaming the streets, and something sinister happening at the abandoned PillowTronics factory.

The characters are just as strange, featuring two federal agents, a washed-up insult clown, an aspiring game developer, and the ghost of a pillow salesman. You’ll switch between them (no pun intended) to explore the town, solving puzzles to unravel the surreal mystery at the heart of it all.

The Switch version will support Joy-Con and touch screen controls for a smooth transition between modes.

Thimbleweed Park will hit the Nintendo eShop on September 21 for US$19.99. Will you be picking up this quirky title? Check out the trailer below and let us know your thoughts in the comments section.

If you answered YES to any of these questions, congratulations! Thimbleweed Park is the game for you!

The Nintendo Switch version will support both Joy-Con controllers and touch screen controls so you can easily switch between tabletop, handheld, and TV modes. The Nintendo eShop price will be $19.99, or equivalent in your local currency.

Okay, but what the heck *is* Thimbleweed Park?
Oh, you haven’t heard about this mystery / comedy game from Ron Gilbert and Gary Winnick, the creators of classic adventures Monkey Island and Maniac Mansion? Well then, let’s set the scene:

October 15, 1987. A dead body is rotting under the bridge, but Thimbleweed Park’s 81 (sorry, make that 80) inhabitants have bigger concerns. The town’s founder also died recently, under mysterious circumstances. The air is buzzing with signals. The hotel appears to be haunted. A giant slice of pizza roams the streets. And something sinister is going on behind the locked gate of the abandoned PillowTronics™ factory — something that could consume us all.

Two federal agents, a washed-up insult clown, an aspiring game developer, and the ghost of a pillow salesman have been drawn to this weird, rundown place. They don’t know it yet, but they’re deeply connected — and they’re being watched. Switch* between them to explore the town, solve puzzles, and unravel the surreal mystery at the heart of it all. As you’ll see soon enough, in a town like Thimbleweed Park a dead body is the least of your problems.