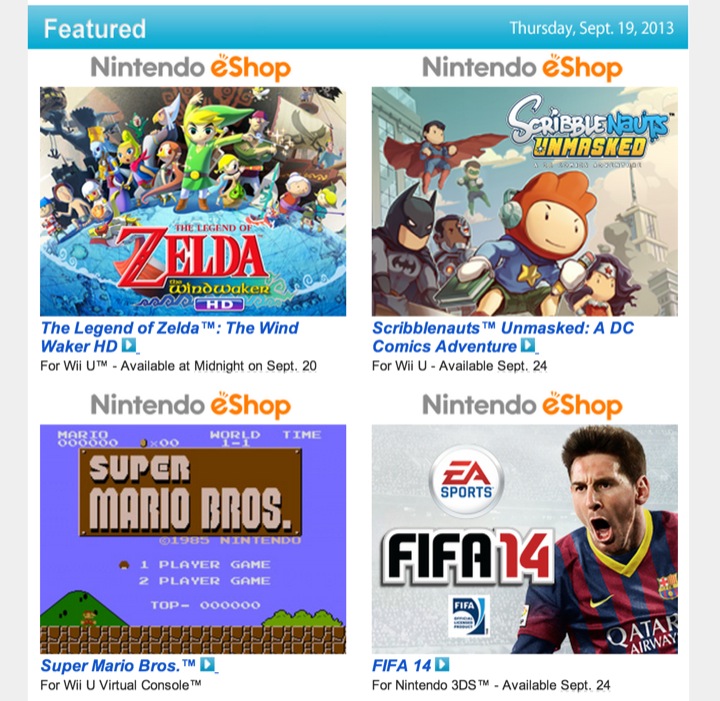 Not much in the actual eShop or VC release this week but still a strong week with the release of Wind Waker HD, Scribblenauts: Unmasked, and FIFA 14. It would be a dumb question to ask what game(s) you will be picking up this week “cough” Wind Waker HD “cough”.

The one VC game is a big one with Super Mario Bros. coming to the Wii U.

Check out the full details with the press release below.

Nintendo eShop on Wii UTM
The Legend of ZeldaTM: The Wind Waker HD – The Legend of Zelda: The Wind Waker makes its glorious return on the Wii U console with gorgeous HD graphics and enhanced game features. In this definitive version of the Nintendo GameCubeTM classic, players can experience the game in gorgeous 1080p graphics and manage their inventory and view maps on the Wii U GamePad controller. With the new Tingle Bottle feature, players with broadband Internet access can connect with others over MiiverseTM. Comments or screen shots posted on Miiverse will wash up on the shores of other players’ games. And if the TV is already in use, no worries – players can play the entire game directly on the Wii U GamePad. The Legend of Zelda: The Wind Waker HD will be available at 12:01 a.m. on Sept. 20.

Virtual ConsoleTM on Wii U
Super Mario Bros.TM – It’s the adventure that started it all. Play as MarioTM and LuigiTM as they jump, kick shells and throw fireballs through eight action-packed worlds in this iconic NESTM classic.

Nintendo eShop on Nintendo 3DSTM
FIFA 14 – FIFA 14 is the most authentic soccer game on Nintendo 3DS with more than 30 licensed leagues, 50 real-world tournaments, 500 authentic clubs and 12,500 players wearing official kits. Play traditional 11 versus 11 matches or free your game in epic 5-v-5 street matches with full-3D effects. Compete as a real-world superstar or re-create yourself in-game. Download FIFA 14 on Sept. 24.

Nintendo eShop Sales
Monster HunterTM 3 Ultimate – Get ready to hunt! Download Monster Hunter 3 Ultimate on Nintendo 3DS and Wii U at 50 percent off until 9 a.m. on Sept. 22.

Chasing Aurora – Play against your friends or race against the clock in Chasing Aurora, the aerial action game that lets you fly like a bird. Download Chasing Aurora on Wii U at a discounted price of $4.99 until 9 a.m. PT on Oct. 3.