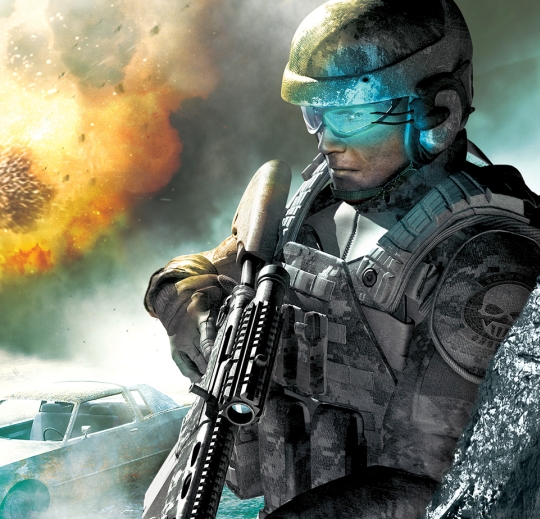 About Tom Clancy’s Ghost Recon (Wii)
After being recruited by the Ghosts of Norway and inserted in Moscow with the Bravo Team, Ghost soldiers Hibbard and Booth must operate as a two-man team, relying on the intel of the local militia to fight their way to their target in a city infested with enemies. With the numbers clearly not in their favor, they will have to use their advanced weaponry and training to make sure that the odds are.

Game features include:
• A true Ghost Recon experience: Progress through over 30 missions of high-intensity combat and tactical infiltration, from the villages of Norway to the streets of Moscow. Experience realistic locations and a credible modern scenario, and choose from a wide range of real-world weapons.
• Built from the ground co-op experience: Two players in third-person on one screen make the experience more natural, more intuitive and more social than ever. Co-Op Hot Join: Friends can hop in and out of co-op at-will, with the AI taking over as needed.
• Arcade Mode: Play in cooperative mode and compare your score online on the world leader boards.

About Tom Clancy’s Ghost Recon Predator (PSP system)
Deep in the jungles of Sri Lanka and behind enemy lines, the Ghosts have a mission to accomplish: Take out the insurgents before the situation gets out of hand. The Ghosts will have their work cut out for them – the enemy is far greater in number and is significantly more knowledgeable about the terrain. In a crowded street, the Ghosts will have to make the distinction between friend and foe with the help of their technology and training. Game features include:
• An exclusive tactical experience: Decide what tactics are best – use your massive firepower to eliminate powerful enemies or use the jungle to sneak behind enemies and strike using the element of surprise.
• Electronic warfare: Use high-tech equipment to hunt, such as drones, air support and prototype weapons. Gaining experience for your squad allows customization of your Ghosts, making them more powerful.
• Multiplayer co-op: Create a rifle team with two other friends (up to three players ad-hoc). Use flanking tactics with your teammates to outsmart the opposition.