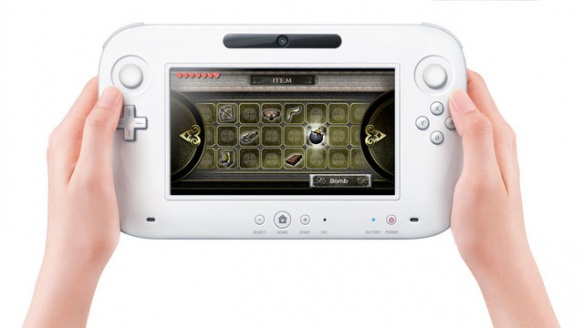 Tomonobu Itagaki (Valhalla Game Studios)
Said that he has a lot of ideas. He’d like to bring not just Devil’s Third to the system, but a variety of other things.

Jun Takeuchi (Capcom)
He believes that developers’ skills will be shown in how they can make use of the controller without having it draw the eyes away too much from the television screen. If Wii U has a strategic price, it could be a big hit, he said.

Hideyuki Kobayash (Capcom)
He feels the new controller is like a challenge issued to game creators. He’s excited to see what types of games creators will make.

Shuu Takumi (Capcom)
Said that coming into contact with new devices makes his dreams expand. As an example of use, he said that the controller could be used for exploring a crime scene from a different perspective.

Kenichi Ogasawara (Tecmo Koei)
He believes Wii U will give birth to new types of titles that use the system’s dual screen setup. Personally, he feels the multiplayer possibilities of having one player use the controller screen while the other payers view the television screen.

Yousuke Hayashi (Tecmo Koei)
He believes the Wii U has the ability to realize completely new game experiences.

Akihiro Suzuki (Tecmo Koei)
The E3 videos made him forecast that the system will deliver new, never-before-seen types of games. While he can’t give any information about projects at present, the controller does get the creator spirit moving.

Toshihiro Nagoshi (Sega)
He thinks it’s a big thing that Nintendo’s hardware has unified around the concept of having two screens. He’s personally interested in seeing if the switch to HD will bring changes to the Wii market.

Shinji Mikami (Tango)
He hasn’t gotten his hands on the system yet. He’s happy about the HD support.

Yoshifumi Hashimoto (Marvelous Entertainment)
The new controller looks like it will lead to some new ideas. For example, in Harvest Moon when you’re in your in-game room, if you turn on the television, the video from the television could be shown on the controller screen. He said that he’d personally like to try out a game that splits up roles, where one player uses the new controller and the second player uses the Wiimote.

Akihiro Hino (Level-5)
Said that because stylus-based games like Professor Layton can now be played, they can consider ports. He also said that the system could expand the type of game that can be played in the living room, so he’d like to think about these types of game in the future as well.

Jiro Ishii (Level-5)
He was excited just seeing Zelda in HD. He’s personally excited about seeing the changes the controller brings to board games and card games.