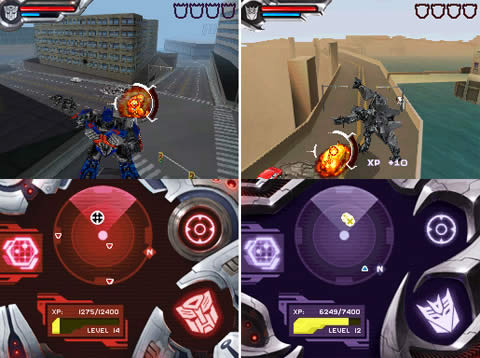 IGN DS has a preview up on Transformers for the DS.  There are going to be two versions of the game: one for the Autobots, and one for the Decepticons.  Here’s a snippet of their preview:

Developed by Vicarious Visions, the team responsible for the DS versions of Spider-Man and Tony Hawk, Transformers will challenge players with more than twenty different missions and have the opportunity to scan and assume the form of more than 30 different vehicles. How cool will it be when you’ll be able to transform into a sports car, fighter jet, or helicopter and zoom around the open world environments? You’ll even be able to customize your paint job.

Transformers will fully support the Nintendo Wi-Fi Connection service for the ambitious “AllSparks War.” Players will link up to the internet and combat to try to see who the more powerful side is. Team Death Match and AllSpark Sports will also be available for up to four players over local Wi-Fi.

Look for both of these games this coming July 4.