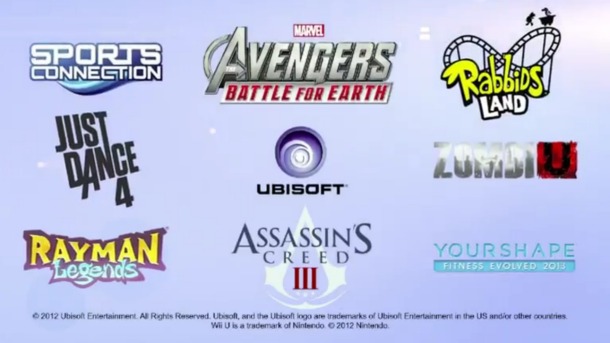 SAN FRANCISCO – November 15, 2012 – Today, Ubisoft® announced that six titles will be available to consumers in support of the Wii U™ system launch in North America on November 18, including Assassin’s Creed® III, ESPN Sports Connection, Just Dance® 4, Rabbids® Land, Your Shape®: Fitness Evolved 2013 and ZombiU™. The same lineup will be available when the console launches in EMEA territories on November 30. Ubisoft currently has the most Wii U titles announced among third-party developers, representing nearly 25% of the launch day titles for the console. Other Ubisoft games arriving soon for Wii U include Marvel Avengers Battle for Earth and Rayman® Legends.

Ubisoft’s history of originality on Nintendo platforms includes multi-million selling franchises for the Wii™ system from Nintendo, including Just Dance, the best-selling third-party game ever on the console, Rabbids and Red Steel®. Ubisoft has also had great success on the Nintendo DS™ system with brands such as Imagine® and Petz®. With the launch of Wii U, Ubisoft is once again aiming to be the leading third-party developer by delivering a diverse lineup that appeals to both core and casual gamers, including fans of action-adventure, dance, family, fitness, sports and survival-horror genres.

“Ubisoft strives to continually deliver unique gaming experiences and the Wii U system allows our studios to explore innovative gameplay concepts for our fans,” said Tony Key, senior vice president of sales and marketing at Ubisoft. “Our Wii U launch lineup is the perfect example of our development teams creating games for fans of all ages and diverse genres.”

Ubisoft titles available at Wii U launch include:

Assassin’s Creed III: For the first time ever, the Assassin’s Creed franchise comes to the Nintendo console, providing a gaming experience optimized for Wii U.  Assassin’s Creed III on Wii U gives gamers new, unique features as they journey from the perilous frontier to the stormy high seas, including playing the game solely on the Wii U™ GamePad. The GamePad Touch Screen provides a wider, more expansive map that gamers can use to easily identify targets and waypoints or switch deadly weapons intuitively.

Assassin’s Creed III, the first game to take advantage of the new Ubisoft-AnvilNext game engine, is set against the backdrop of the American Revolution in the late 18th century and introduces a new hero, Ratonhnhaké:ton, of Native American and English heritage. Adopting the name Connor, he becomes the new voice for justice in the ancient war between the Assassins and Templars. Gamers become an Assassin in the war for liberty against ruthless tyranny in the most stylized and fluid combat experience in the franchise to date.  Assassin’s Creed III features unprecedented scope and scale.

ESPN Sports Connection: Combining rosters from gaming and sports industry leaders, ESPN Sports Connection is the next generation of multi-sport games that brings families and friends together in an interactive and engaging setting. Transform your living room into the ultimate sports mecca by using the innovative Wii U GamePad to score a curled free kick in soccer, steer a car to victory in karting, or catch a fly ball in baseball. For every sport included in the game, players will be able to experience the full match with gameplay that is accessible for players of all skill levels. In addition to single-player challenges, ESPN Sports Connection also features competitive and co-op multiplayer modes and supports up to five players using the GamePad. Sports fans will enjoy the way authentic ESPN broadcast graphics have been stylized for Wii U to further bring these sporting events to life, and will have the opportunity to unlock original designs to create their own unique ESPN-branded gear including ESPN, SportsCenter, SportsNation, and ESPNU.

Just Dance 4: The Just Dance phenomenon that has more than 30 million people dancing is back with its latest installment. Just Dance 4 features more than 40 new tracks, ranging from chart-topping Billboard hits from Rihanna and One Direction to classic dance party tracks from Stevie Wonder and The B-52s. While the game still includes everyone’s favorite modes like Duet Mode and Dance Mash-up, Just Dance 4 introduces all-new features exclusively for Wii U, including Puppet Master Mode, which allows a player to change choreography in real time by selecting the next dance move on the Wii U GamePad Touch Screen, and MC mode, where players have the ability to choose the next song, sing the lyrics displayed on the GamePad, and write on-screen live dedications! Other new features include Battle mode, where friends go head-to-head with each other in six rounds of dance battles, an updated Just Sweat Mode with new workouts and a real calorie counter, and Alternative Choreographies which allows for super-challenging dance moves to be unlocked so the dance party never ends!

Wii U-exclusive tracks include: “Ain’t No Other Man” by The Girly Team, “Want U Back” by Cher Lloyd ft. Astro and “Domino” by Jessie J.

Rabbids Land: The Rabbids are bwaaaaaack with an entirely new interactive party game focusing on asymmetrical gameplay between the Wii U GamePad and TV screen. In their latest escapade, the Rabbids have invaded an amusement park and plan to make the most of their day by wreaking havoc in around 20 exhilarating attractions around the park. Players will use the GamePad in a variety of delirious interactions with their Rabbids including exploring for lost treasures in Raiders of the Lost Ball, sneaking items from the gift shop in The Gift of Taking or mixing music and coordination skills on the Star Cheap Tour. Up to four players can participate in the turn-based Trophy Race, hosted by Mr. Lucky, where they will compete against each other in a board game-style setting to capture the most trophies through a variety of friendly competitions, special events and zany quizzes.

Your Shape Fitness Evolved 2013: The follow up to last year’s best-selling fitness game, Your Shape Fitness Evolved 2013 is a cutting-edge fitness product that helps you to set and achieve your goals in an engaging and motivating way. Your Shape elevates fitness gaming to a new level by offering a fun-driven fitness experience with more than 125 diverse workouts and 215 unique exercise moves. In addition to the variety of workout classes including aerobics, kickboxing, boot camp and yoga, the game also includes a slew of competitive cardio dance classes featuring upbeat, energetic music tracks by popular artists such as Lady Gaga and Rihanna to keep you motivated and moving. Your Shape Fitness Evolved 2013 provides a personalized workout experience with virtual coach tailored to your current fitness level that is packed with fun and exciting activities to achieve the player’s individual fitness goals. Players can use the Wii U GamePad to connect with the Your Shape Center and create online challenges, track their progress against friends and customize unique workout routines. And while getting fit isn’t only about exercise, Your Shape Fitness Evolved 2013 includes a large database of over 150 recipes for all occasions enabling you to eat well and eat right.

ZombiU: Exclusively for the Wii U system from Nintendo, ZombiU puts players in the middle of London circa 2012 where an outbreak has infected the population, turning them into mindless monsters preying on the flesh of the few remaining survivors. This fear-fueled first-person shooter takes all the best components of the horror genre and adds original interactive elements, including a unique death mechanic that puts players in the body of a different survivor each time they die.

ZombiU showcases the innovative features of the Wii U GamePad and delivers new experiences not possible on other consoles by creating a tactile connection between players and the in-game world. The GamePad will also serve as the player’s ultimate survival kit which contains all the resources scavenged throughout the game. Finally, ZombiU features a distinctive multiplayer adversarial mode that allows one player to spawn and control enemies from a top-down view via the GamePad while the second player fights for survival on the big screen in a first-person shooter view with the Wii U Pro Controller.

Additional Ubisoft titles in development for the Wii U launch window:

Marvel Avengers Battle for Earth: Battle against The Skrull Invasion in the ultimate Super Hero brawler starring over 20 Super Heroes and Villains from the Marvel Universe, including all of the Avengers, Spider-Man and Wolverine. Based on the Secret Invasion storyline, the game allows fans to embody their favorite Super Hero or Super Villain to defeat epic enemies by using the Wii U GamePad’s Touch Screen to shoot arrows like Hawkeye, strike a debilitating bite as Black Widow, or hurl gigantic rocks as the Hulk. Up to four players can team up or compete against each other in co-op, arcade and versus modes and use a combination of the GamePad along with the Wii Remote™ and Nunchuk™ controllers to activate super attacks, launch devastating powers and dodge their opponent’s moves. Marvel Avengers Battle for Earth will be available on December 4th in the US and November 30th in EMEA territories.

Rayman Legends: The classic cast of Rayman, Globox and the Teensies return and are joined by new characters Murphy and Barbara as they embark on a fantasy adventure through a series of legendary worlds with new environments and enemies. Developed exclusively for Wii U, Rayman Legends expands beyond the traditional platforming experience by utilizing the Wii U GamePad in an array of innovative ways to interact with the game. Players can use the Touch Screen on the GamePad to take out enemies, cut ropes to clear a path and move rotating platforms with the gyroscope technology. Rayman Legends features a fresh gameplay adventure to enjoy alone or with friends, and a plethora of creatively themed levels including several musical maps intricately set to popular and original music, a gorgeous underwater haven and a flourishing beanstalk environment.

A demo for Rayman Legends will be available on the Nintendo eShop with the launch of Wii U, and available to purchase in early 2013.

Uplay and Wii U: All the Ubisoft Wii U titles will include Uplay, providing players with exclusive rewards and advice, including: