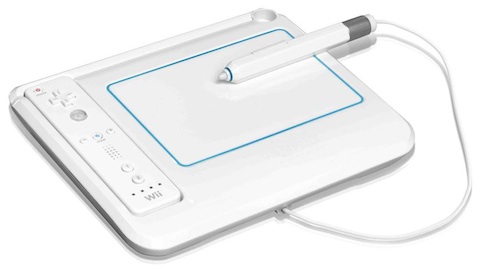 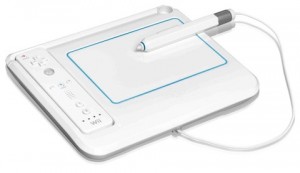 Agoura Hills, Calif. – November 15, 2010 – The living room turns into an art studio with the release of the uDraw GameTablet™ by global video game developer and publisher THQ Inc. (NASDAQ: THQI).  The uDraw GameTablet is a first-of-its-kind, innovative gaming accessory developed by THQ exclusively for Wii™ and is now available at retailers across North America.

With the uDraw GameTablet, the television becomes a virtual canvas for everyone from doodlers to accomplished artists, letting them create original artwork, enjoy drawing-based games, such as Pictionary™ – and even save their artistic creations on an SD memory card to print and share via e-mail with family and friends.

Debuting at retailers in time for the holidays, the uDraw GameTablet has a suggested retail price of $69.99 and comes bundled with a feature-rich drawing, coloring and art-based video game, uDraw Studio™.

In addition, THQ is releasing two video games designed especially for use with the uDraw GameTablet. In the entirely new Dood’s Big Adventure™, gamers of all ages enjoy an exciting drawing-inspired side-scrolling adventure. And theuDraw GameTablet puts a new spin on the classic game of quick sketches and crazy guesses – Pictionary™, which comes to video game consoles for the first time in more than two decades.

Already, Pictionary™ for the uDraw GameTablet has been hailed by Parenting, Family Circle and Good Housekeeping as one of the best Wii games for kids and families.  Both Dood’s Big Adventure and Pictionary™have a suggested retail price of $29.99 each.

“The uDraw GameTablet is an amazing addition to the Wii and opens up its creative possibilities,” said Reggie Fils-Aime, President and Chief Operating Officer of Nintendo of America. “THQ has shown enormous innovation with uDraw, which is not only a perfect holiday gift, but we think will become a ‘must-have’ for Wii owners for a very long time.”

The uDraw GameTablet is expected to launch in Europe and other international territories beginning early next year. Additional uDraw™ video game titles are planned to release in 2011 and beyond.