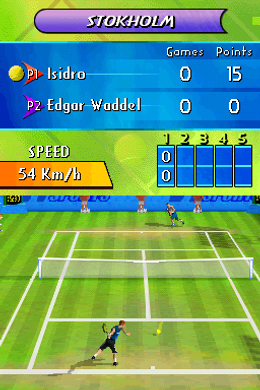 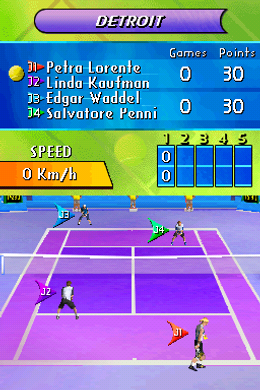 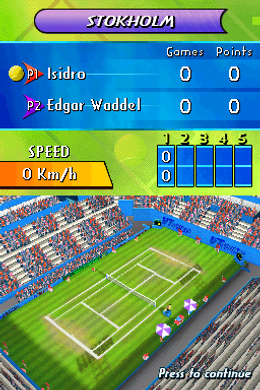 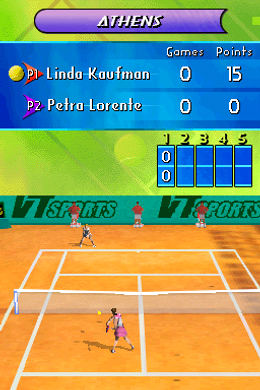 The game
VT TennisTM is the most competitive and addictive tennis game for the Nintendo DSiWare. Virtual Toys’ experience in this kind of games will help you to turn into the new international circuit champion.

Train your budding tennis star to serve, lob and smash your way to victory with precision swipes in all directions, using its innovative Nintendo DS stylus and Touch Screen controls!

Play a quick singles or doubles match on one of the available courts. In quick match mode, you can modify all the game settings such as the game difficulty, sex of your player and the number of games and sets per match. There are various locked courts which you can only play once you have progressed in career mode. The objective in career mode is to become nº 1 in the world rankings. To do this, the player will have to unlock courts as he competes in championships all over the world.

At the start of career mode, the player will see himself in last place in the rankings. From this moment on, you must battle your way up to be among the top players. You can play on all types of surface: grass, clay and hard courts and learn the best techniques for winning each tournament on the different surfaces. Seventeen tough courts, each more difficult than the last, stand between you and your final victory.

How to purchase VT Tennis
VT Tennis is only available if you have Internet access on your Nintendo DSiTM, you will not find it in the stores. You can easily download the game on your console, acquiring it through the Nintendo DSi Shop.

To purchase VT Tennis you have to access the Nintendo DSi Shop and once there, select Nintendo DSiWareTM. Once inside the Nintendo DSiWare section select “Find Titles”, select “Search by Game Title”, enter the text “vt tennis” and follow the onscreen instructions to download and install it on your console. Once done, you can play VT Tennis on your Nintendo DSiTM any time you want.