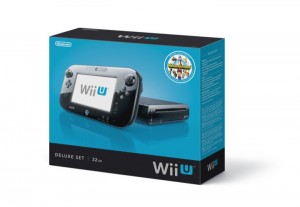 Did you miss out on pre-ordering a Wii U? Well then here is some good news!  Walmart will be opening up pre-orders for the Black Wii U Deluxe Bundle tomorrow according to CheapAssGamer.com Forum user ‘N1ntendo’. The post claims that Walmart will be accepting pre-orders for the Wii U starting tomorrow and ending on November 1st.  Walmart says they will not be taking pre-orders after November 1st but in the forum post it also says ‘IMPORTANT NOTE: Due to limited quantities the period to reserve your copy could end sooner’.  After seeing how fast pre-orders were scooped up when other retailers began accepting them, I would not wait until October 31st to pre-order the Wii U at Walmart.  I have a feeling that the Walmart pre-orders will be sold out either sometime next week or soon thereafter.  There is a limit of 2 pre-orders per customer and the Wii U can be pre-ordered using Walmart Holiday Layaway.  It also says in the forum post that Walmart will be holding a midnight launch for the console.  If you missed out the first time around, then make sure you get to Walmart early tomorrow and get yours while you still can!