Editorial: What’s Next For Nintendo?

Nintendo has been applying the shock and awe strategy recently when it comes to the company’s games and announcements.  Recently fans were shocked by the announcement of new Mario Kart 8 DLC and awed by the reveal of ‘New’ 3DS and ‘New’ 3DS XL.  Both the DLC and new 3DS hardware revision came out of the blue and really created some buzz around Nintendo right at the end of Summer and just before the kick off of Fall and the looming Holiday season.  What is interesting about these announcements are what lies outside of their face value.  There may be clues to what might be in Nintendo’s future. 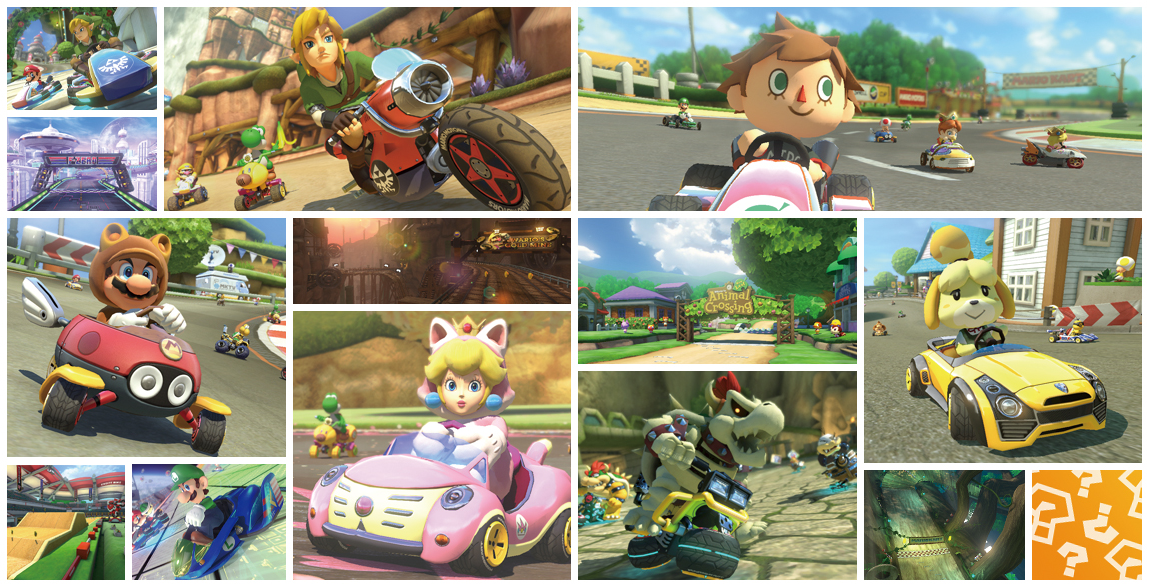 The core Mario Kart experience has remained largely the same since the series was created.  With small additions or changes to the formula with each new entry, retaining the core experience is what has driven the success of each new Mario Kart title.  This time around with Mario Kart 8 we were treated to a few new items, anti-gravity, Mario Kart TV, and some more features that carried over from the predecessor on the 3DS, Mario Kart 7.  Then out of nowhere comes the announcement of DLC just 3 months after release.  While adding downloadable content has become somewhat of a normal occurrence in the video game industry, this Mario Kart DLC was quite unique.  For the first time in the history of the series, Nintendo is introducing characters from outside of the Mario franchise.  With the introduction of Link, Isabelle, and Villager, Mario Kart fans will be able to race as other iconic Nintendo characters in the popular kart racing series.

What does this have to do with Nintendo’s future?  This is just one sign that Nintendo is breaking the mold in regards to their games.  Fans have complained in the past that Nintendo ‘milks’ franchises and just release the same thing over and over again.  Nintendo has just proved them wrong.  This could also ring true for other franchises as well.  Super Smash Bros. is just over the horizon and will be arriving for 3DS very soon and shortly after will be launching for Wii U.  Nintendo stated last year that there are no plans for Super Smash Bros. DLC but if this additional Mario Kart 8 content is any indication, we could almost expect some sort of DLC for Super Smash Bros.  In fact, with the release and compatibility of amiibo with Super Smash Bros, it would be quite surprising if there wasn’t DLC for the popular fighting game.  While all this is purely speculation there are more physical clues as to where Nintendo might be heading with their video game empire.

After the announcement of the ‘New’ 3DS line in a recent Japanese Nintendo Direct, something about the new 3DS hardware revision looked very familiar.  The button layout of the ‘New’ 3DS looks eerily similar to that of the Wii U GamePad.  Nintendo has even gone so far as to add another set of shoulder buttons to the handheld and now the ‘New’ 3DS resembles more of a portable, 3D-enabled GamePad.  This is one sure sign that Nintendo is closing the gap between their two hardware divisions.  Could Nintendo be seriously considering launching one unified line of hardware?  Many of the Pure Nintendo staff have discussed a dream system such as this in the past but now it is seems more plausible than ever before!  One system that covers all of our gaming needs and that we can play at home but then take on the go as we need to!

There are still quite a few steps to make before Nintendo can reach this point in our alternate reality that we are creating in our mind.  But it also seems that Nintendo is already on that road and one more small sign that may point to this unified home/handheld console hybrid.  This small indicator is the direction Nintendo is heading with the marketing for their ‘New’ 3DS.  The ‘New’ 3DS brand is represented in the exact same style as amiibo.  Seeing that amiibo will work for both 3DS and Wii U, Nintendo’s next gen home console hardware may appear with that same amiibo style branding.  This may still be a long way off but it may just be the time Nintendo needs to transform the industry once again.

Nintendo likes to guide the industry by introducing new and interesting concepts or designs.  They have done so since the inception of the company many years ago.  Recently their success has waned in the eyes of some.  But just think, if Nintendo can take their handheld and home console market and mold it into one giant piece, could they be stopped?  As two separate pieces of hardware can vary in success depending on many factors, including market share.  What if Nintendo took their wildly popular handheld market and combined it with their home console market, which has seen varying success and failure in the past.  Maybe it’s time Nintendo started really gambling with their future and go all in.