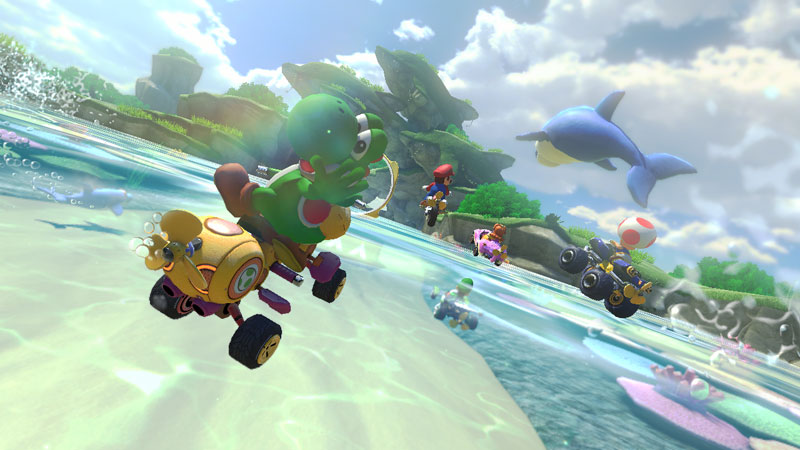 Welcome to part 2 of our 8-part Mario Kart feature. Each week we’re dissecting Mario’s famous racing outings in the lead-up to the release of Mario Kart 8 on May 30. In case you missed it, check out last week’s post on the history of the Mario Kart series. 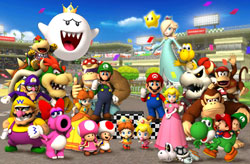 What’s a race without competitors? There are many reasons why Mario Kart is super-fun and mega-popular, one of which is the inclusion of bright characters with colorful personalities – who are also instantly recognizable from the Mario universe.

Believe it or not, when the original Super Mario Kart began development, it was intended as a generic two-player racer, until someone decided to add blue overalls to the main driver. Et voilà – Mario’s adventures steered away from bouncing on Goomba heads to crashing right into them.

Today we delve further into Mario Kart by taking a closer look at Mario Kart’s varied character roster over the years, from the mandatory entries to the obscure characters, as well as who we’d like to see in Mario Kart 8.

Many characters have slip-streamed their way into Mario Kart – 34 to be precise, not including Mario Kart 8 – and everyone has a favorite. A quick poll amongst the Pure Nintendo crew shows our top three characters being Mario, Koopa Troopa and Toad. Congratulations! 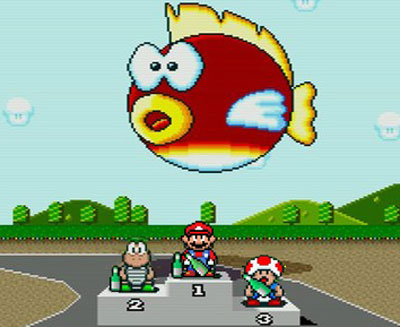 But is Mario really the most popular? Sure, it’s his game … but let us know your racer of choice is in the comments section below.

There were eight racers in the Super Nintendo original, Super Mario Kart, six of whom have continued to race in every title since – namely Mario, Luigi, Toad, Yoshi, Bowser, and Princess Peach. Donkey Kong almost qualifies for this award, appearing in every game since then, but originally it was actually Donkey Kong Junior who made the debut (more on that in a moment).

Other notable regular racers (not including any upcoming appearances in Mario Kart 8) are:

If you haven’t played all previous Mario Kart titles, or weren’t able to unlock all the hidden characters, there are some obscure ones that you may not have noticed over the years. Here are our top 8: 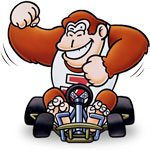 One of the last unlockable characters on Mario Kart Wii, Dry Bowser is an alternate, skeletal version of Mario’s greatest nemesis (that’s what happens when your castle boasts lava pits instead of water features). Players must obtain at least a one-star rank for all the 150cc cups to unlock this scary-looking guy.

Wiggler has been one of Mario’s varied enemies since Super Mario World on the SNES, and has appeared in many of Mario’s spin-off games over the years. He makes his playable debut as an unlockable character in Mario Kart 7 on the 3DS, by winning the 150cc Leaf Cup. He also featured (in giant form) as an obstacle in Mario Kart Wii, and was a racing opponent in Mario Kart DS’s mission mode.

This little mask-wearing enemy of Mario has appeared in various Mario Kart titles in either the background or as an obstacle. For fans of the console versions, you may not know that the Shy Guy’s first playable appearance was as the default driver for download play on Mario Kart DS. He is also an unlockable playable character in Mario Kart 7 by winning gold in the 150cc Shell Cup. 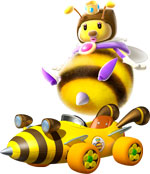 Also known as Queen Bee in Mario Galaxy, Honey Bee is a surprise choice for a drivable character. Her debut as a playable character was in Mario Kart 7, and she is unlocked by winning the 150cc Banana Cup. She even has her own bee-themed kart and battle course. 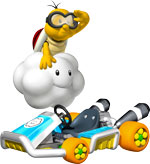 Lakitu has been in every Mario Kart title, not as a competitor, but by waving the checkered flag to start and end races, fishing drivers from obstacles, and informing drivers of lap numbers and when they’re heading in the wrong direction. He became a playable character in Mario Kart 7, begging the question – who waves the flag when he drives? Take a closer look: the playable version has a red shell, whereas his flag-waving brother sports a green shell. Another interesting fact: if you race backwards in Mario Kart Wii, it is possible for “wrong direction” Lakitu to be crushed by a Thwomp.

R.O.B. is special because he is the first (and only) non-Mario character to appear in the Mario Kart series. R.O.B. – short for Robotic Operating Buddy – is a character based on the Nintendo Entertainment System accessory from the mid-1980s. His playable debut was in Mario Kart DS as an unlockable character. Unlocking him requires winning gold in all 150cc Mirror Cups, no mean feat. He has also appeared in WarioWare and Smash Brothers titles, lucky robot.

Did you know that this magically-inclined Koopa was an original driver during development of Nintendo 64’s Mario Kart 64? He was later replaced with Donkey Kong. Maybe he’ll make his triumphant return to the track in Mario Kart 8?

Here’s a full list of all characters, including known Mario Kart 8 racers (source: Wikipedia). Gray blocks are unlockable characters. Click on the image to view a larger version. 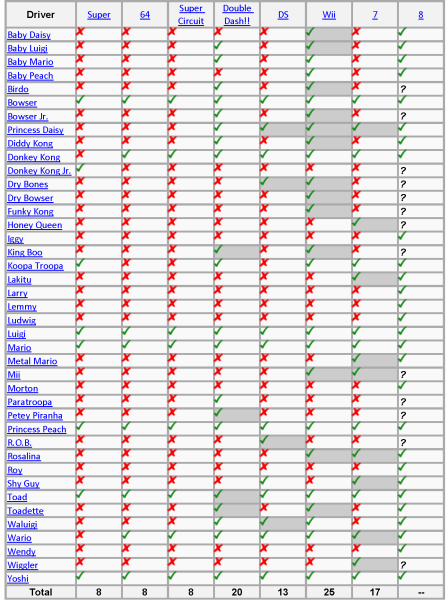 It’s been revealed that Bowser’s kids – the Koopalings – will be playable characters in Mario Kart 8. But we wouldn’t put it past Nintendo to keep a few hidden characters up their sleeve for unlocking after release. In fact, we reported on the latest screenshot just yesterday, showing at least 30 characters available in Mario Kart 8 – with three question marks still visible.

So let the speculations begin! Here’s our wish-list for who we’d like to see driving with Mario and co. in the next installment.

One of Mario’s oldest nemeses, Goombas already appear as hindrances on certain tracks by looking sullen and moving from side to side. Get off the road, frowny face! It’s about time these little brown mushrooms get behind the wheel to go bumper-to-bumper with Mario.

If the Koopalings are racing, surely Boom Boom – who guards the mid-level castles in Mario’s latest Wii U outing – will demand a piece of the action. He’s been harassing Mario in fortresses since Super Mario Bros. 3, so it wouldn’t be a surprise to see him booming onto the kart-racing scene.

Luigi’s ghost-busting pal is a likely competitor, having visited the 3DS last year to lend a hand to our green brother in his second ghost-hunting solo outing. A Poltergeist 3000 wouldn’t go astray as a weapon either.

Although these guys are further removed from the Mario-verse, it would be amazing to see some of Nintendo’s other iconic characters join the biggest race this side of the Mushroom kingdom. R.O.B. already broke the tradition, so anything is possible.

With only three question marks available (that we know of), who would you like to see join the race in Mario Kart 8? Let us know if we’ve missed your favorite character in our list.

That sums up our character profiling for this week, but stay tuned for part 3 of our series next week, when we’ll look at the diverse tracks that make us awe in wonder at their sheer beauty, and/or throw our controls in frustration (Rainbow Road, anyone?).

And remember – it’s only 6 weeks until Mario Kart 8 is released!