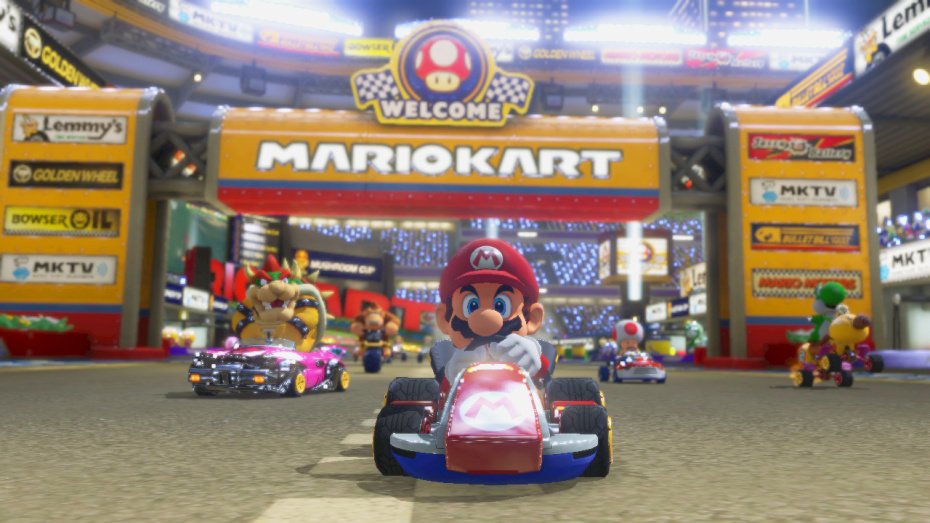 Each week we get one step closer to the May 30 release of Mario Kart 8 on the Wii U. To help pass the time until then, we’re reminiscing about why we love Mario Kart in the first place. So far, we’ve delved into the series’ history and colorful characters, and today we’re looking at the amazing tracks that pave the way to that glorious gold trophy.

Firstly, a bit of background on how the courses fit into the structure of the game. There are four standard cups in Mario Kart: Mushroom, Flower, Star and Special. This has been the case since the first Super Mario Kart in 1992. The exception to the rule (there’s always one) is Mario Kart: Super Circuit on the Game Boy Advance, which hosted an extra Lightning Cup between the Flower and Star Cups.

Mario’s fourth outing on the racing scene, Mario Kart DS, debuted the Retro Grand Prix, another full set of four cups – Shell, Banana, Leaf and Lightning – that revisited classic courses from previous titles. This essentially doubled the amount of playable tracks per game. Although it must be noted that the full set of SNES tracks were unlockable in that same black sheep, Mario Kart: Super Circuit.

Super Mario Kart consisted of 20 tracks, with five courses in each of the four cups, however since its sequel Mario Kart 64, each cup has consisted of four courses. Over the seven Mario Kart titles to date, there is an impressive grand total of 120 unique tracks for Mario and co. to practice their road rage.

There are numerous types of tracks, from deserts to beaches, but only three specific tracks have made consistent appearances in each and every game: 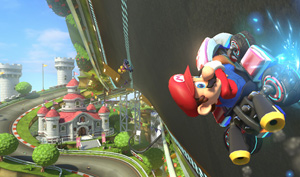 The star of the show is entitled to his own Mario-themed course (of course), and these generally appear within the Flower Cup. The two exceptions are Mario Kart DS (appearing in the Star Cup) and Super Mario Kart (where there are actually four Mario Circuits – two within the Mushroom Cup and one each for the Flower and Star Cups).

Mario’s courses are set on a road, usually surrounding or even going through Peach’s Castle. Goombas often patrol portions of the track, with Pirahna plants or Chain Chomps also ready to take a bite out of innocent karts driving past. There will be a Mario Circuit in Mario Kart 8, also set for the Flower Cup. 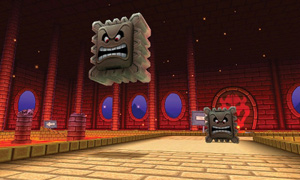 Another regular in every Mario Kart is Bowser’s home of bricks and mortar, lava and fire. In these tracks you find yourself racing on paved roads featuring tight turns, all whilst avoiding lava pits, fireballs and Thwomps. Since Mario Kart: Super Circuit, these tracks are found as the second last course of the Special Cup. 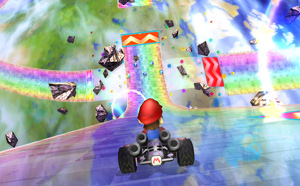 You either love or hate these multi-colored tracks. With swirly tracks of bright and pretty roads, and magnificent space-y backdrops, these dangerous tracks feature tight turns, often with no sides to catch you during a mis-timed powerslide.

Rainbow Road is always the last track of the Special Cup, and the final race of the game, and usually the longest and hardest. It’s a fun, and at times frustrating, Mario Kart tradition.

What’s in a name?

Apart from Mario and Bowser who, as mentioned above, have at least one track in every Mario Kart title based on them, other main characters are also featured throughout the series. Here are some regular track stars:

Luigi’s four courses all occur in the Mushroom Cup. They mainly consist of circuits, similar to a formula one race, and are generally simple enough to ease you into the game. The exception, and standout, is Luigi’s Mansion from Mario Kart DS. Based on the GameCube title of the same name, Luigi’s Mansion is a race through a haunted mansion and its surrounding grounds, with moving objects, mud and skeletal trees as the main obstacles.

Yoshi has four courses, one a desert, one a circuit, and two with fairly unique honors. Yoshi Falls (Mario Kart DS) is one of the shortest tracks in a Mario Kart title, consisting of a round mountainous track surrounding a water-filled valley with a giant Yoshi egg in the middle. The short-cuts are tempting, but watch for the water falls trying to drag you down. Yoshi Valley (Mario Kart 64) is the track with the most possible pathways. In fact, there are so many paths that the game itself cannot tell who is leading the pack until it’s all over.

Donkey Kong has four entries, beginning with Mario Kart: Double Dash. Each track revolves around either a jungle or snow theme (perhaps a precursor to his recent Tropical Freeze outing?). The courses are always fast and fun, with plenty of tight turns and high rises to navigate. There’s usually a barrel canon in there somewhere, blasting you back to the top to hightail it down the mountain again.

Toad’s three courses vary from a traffic-laden turnpike in Mario Kart 64 to a simple circuit in Mario Kart 7. The most interesting, though, is Mario Kart Wii’s Toad’s Factory, which is a slightly manic drive through, well, a factory. There are boxes to smash, moving platforms to misdirect, flashing lights, smoke, sirens, jumps, mud (for some reason) and stamp presses to avoid. Good times!

Peach’s three courses also range in style, from a simple circuit to a beach course. Her most interesting track is Peach Gardens from Mario Kart DS. Here you traverse the outskirts of Peach’s castle, including a well-maintained hedge maze patrolled by Chain Chomps. There are water features, Monty Moles, and some tight turns, making this a scenic yet frantic race through Peach’s backyard.

With 120 different tracks, there is a lot of variety, and a lot of fond memories. Here is a snapshot of our top 8 favorite Mario Kart track moments:

To finish off, here are some beautiful Mario Kart 8 screenshots, showing off some of the terrain we can expect to see in the new game. You can see a desert one in there, a couple of Rainbow Roads, beach ones, something Luigi’s-mansion-ish, as well as some kind of candy windmill scene. And we have no idea where Wendy Koopa is, but it looks like a very colorful course. Enjoy!

We hope this retrospective look at Mario Kart’s varied track designs will tide you over for another week. Are you excited about seeing the fantastic new tracks awaiting us next month? Mario Kart 8 can’t come soon enough!

With only 5 weeks to go, join us next week for a look at the huge variety of items that help make Mario Kart so competitive, and so much fun.