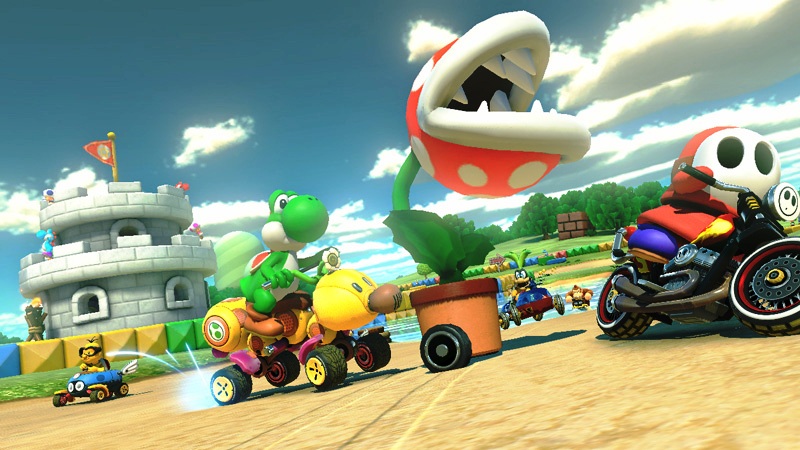 In the lead-up to Wii U’s Mario Kart 8, we’ve looked with fondness over the reasons we love the series, including the history, characters and tracks. This week we’re going to talk about those wonderful and varied items that can help or hinder your chances at winning a race.

The variety of items available for attacking your competition or temporarily enhancing your kart is something that helps set apart the Mario Kart series from other racing titles. Sure, other titles utilise items to some effect, but none seem to get the balance quite right. Mario Kart’s items are instantly recognizable, with the effect simple yet powerful. It means that, not only will you need driving skills to win a race, but successful offensive and defensive tactics can really make the difference between the gold and silver trophies. 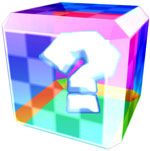 Items aptly come from Item Boxes, which usually appear in a line across the track at certain points in the circuit. Running through (or over) an Item Box brings up an item list that quickly scrolls in a roulette-like fashion until it stops on an item. This is consistent throughout the Mario Kart series, however there have been some subtle variations over the years:

Nothing makes you feel quite as secure as holding a red shell behind your kart to protect yourself and/or intimidate others. The Pure Nintendo team has thought long and hard about which items are our favorite, listed below. Let us know whether you agree!

Let’s get the most hotly contested out of the way first. The Blue Shell was first introduced in Mario Kart 64. You either love or hate this item – or maybe both, depending where you are on the track when it is launched. Most players will relate to the anguish of just missing first place due to a Blue Shell taking you out in the final lap, however, it’s satisfying when it knocks out your competition so that you can overtake and win.

A little trivia: there are two versions of this item. In Mario Kart 64, Mario Kart: Super Circuit, and Mario Kart 7, the Blue Shell knocks out any karts in its path to the leader. In other titles, the shell has wings and flies above the race to specifically home in on the leader.

A staple item present in all Mario Karts to date, the lightning bolt is a powerful item, usually acquired by racers nearing last place. Activating the item causes all other racers to shrink, making them slower and weaker. In Mario Kart 7, Mario Kart DS and Mario Kart Wii, the length of time a player remains shrunk depends on their current position – players in first place remain small for longer than second place, and so on. The only way to avoid shrinking is to be lucky enough to be wielding a Mega Mushroom, Star, Boo, or Bullet Bill as the lightning strikes. Or if you’re fortunate (or unfortunate?) enough to be falling over the edge at that time.

Another classic item from all titles in the series, the Green Shell is basically a projectile that shoots from your kart in a straight line, knocking over any target in its way. They rebound off walls, occassionally causing chaos in tight quarters when multiple shells are bouncing back and forth. It’s quite satisfying when a well-aimed Green Shell is on target and connects with the kart in front (or behind) yours!

Three times the power of the Red Shell homing missile. Introduced in Mario Kart 64, a set of three shells orbits your kart, waiting to be fired off one by one, at your discretion. Having three shells at your disposal is a truly gloat-worthy experience, particularly if you’re in second-place and your friend in first place knows exactly what to expect. These can be used defensively too: if another kart bumps into your rotating shells, it will stop them in their tracks (and use up one of your shells).

An item unique to Mario Kart: Double Dash!, and even then only available to Baby Mario, Baby Luigi, King Boo and Petey Piranha. The Chain Chomp attaches to the front of your kart, pulling it along quickly, much like the Bullet Bill. Any karts or items in its path are swept away, and after a short time, the Chain Chomp breaks off from the kart and continues racing down the track until it vanishes. Apprently, the Chain Chomp was set to appear in Mario Kart DS. Is this an item you would like to see make a return in Mario Kart 8?

There are a few unique items that you may not remember from past Mario Kart entries:

The Feather grants the user the ability to perform a Spin Jump twice as high as a regular driver can. This can be useful for jumping over barriers, as a quick and easy shortcut, and for jumping over enemy projectiles. The Feather is one-use only, so it’s ideal to make the jump count. Apparently the feather was originally set to return in Mario Kart 64.

The green (Yoshi) or pink (Birdo) Eggs work similarly to a Red Shell, chasing after a kart and knocking it out when collision occurs. After colliding, these eggs let out three random items, which could be a Banana, Green Shell, Mushroom, Star, or Bob-omb. Even if an Egg takes too long to find a kart, it will eventually break apart on its own, still spilling out three random items.

If you’re only familiar with Mario Kart: Double Dash!, Mario Kart Wii or Mario Kart 7, then you may not realise that Boo was once an item (as opposed to King Boo being playable in Double Dash and Mario Kart Wii). When a player uses a Boo item, they become transparent and invisible to other racers for a short period, passing through them. The Boo also steals an item from another racer and brings it back to the player that released it, making them a fairly useful item.

One of the more annoying items to receive, the Thundercloud is basically a stroke of bad luck. A dark cloud sits over your kart for a short time until lightning strikes, shrinking your kart, just like a Lightning Bolt item would. The only saving grace is that the cloud can be passed on to another driver’s kart by bumping into them before the strike. It can be passed any number of times until that dreaded lightning hits.

Let us know which items you just love, or can’t stand, in the comments section below.

When Mario Kart 8 is finally released next month on the Wii U, can we expect to see our favorite items return? It’s a safe bet that standard items like shells, banana peels, lightning bolts and mushrooms will make a welcome return, but what new items are in store?

New items are largely inspired by Mario’s platforming outings prior to the latest Mario Kart, so it’s likely that something from New Super Mario Bros. Wii U or Super Mario 3D World will be present. And Nintendo actually beat us to the punch on further speculation by recently revealing the piranha plant and the boomerang. Both will be fun to use, though we’d love to see Super Mario 3D World’s Cherry item in the new game – duplicating your racer would cause utter confusion in your opponents!

And just today, Nintendo released even more information about new items, including the Super Horn and Crazy Eight. Check out the description and images below and let us know if you’re excited to try these new items!

The new Super Horn blows away all other items – literally. Sounding the Super Horn issues forth a sonic shock wave that blasts away everything in the vicinity, including other drivers, Red Shells and even blue Spiny Shells. It’s a potent asset, especially for drivers trying to maintain their lead. Mario Kart 8 also introduces the Crazy Eight, a swirl of eight different items that lucky players can use one by one.

Come out of your shell

After eight titles, isn’t it time we investigate a new shell color? Remember the yellow Koopa shell from Super Nintendo’s Super Mario World? Or how about the rare rainbow shell? It created Kamikaze Koopas, spinning around like crazy. In Mario Kart, a gold shell could provide a short brief supply of unlimited shells, like the Golden Mushroom. Or it could leave a trail of coins to collect in its path. A Purple Shell could leave a trail of slippery oil on the road. The possibilities are endless – imagine what a black shell might do!

Another week has passed, bringing us gloriously closer to the next instalment of Mario Kart. In fact, Mario Kart 8 will launch in exactly one month today! If you haven’t already, check out the Mario Kart direct, or view our previous Why We Love Mario Kart posts.

With that in mind, join us next week when we delve into the vehicles that Mario has steered through the series. We’ll look at the varied kart types and techniques employed to win. Until then, happy racing!