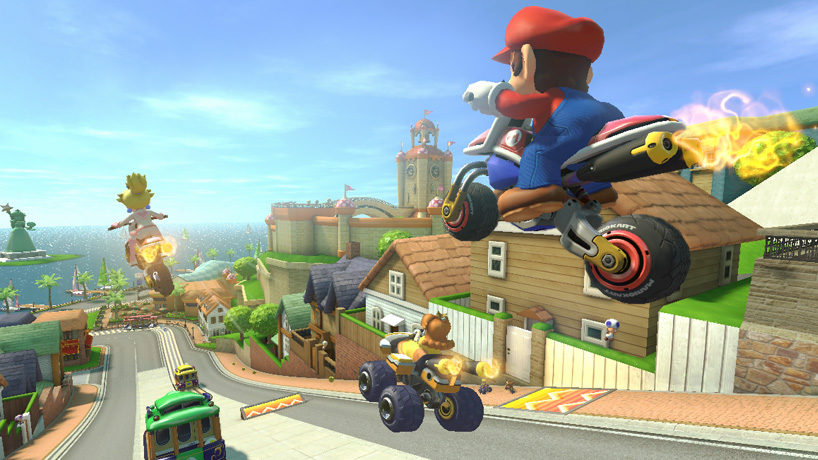 Why We Love Mario Kart, Part 5: Vehicles and Techniques

Mario Kart is well-known for its colorful characters, fun tracks and diverse items. Yet when you look under the hood, there’s a depth to the series that strikes a fine balance between simple, casual fun and adrenaline-pumping, racing action.

What started in 1992 as a simple kart racer has morphed into a series featuring all sorts of vehicular add-ons. Today we’ll look at the vehicles and techniques that give Mario Kart the edge, making it such a solid racing game.

Out of my dreams, and into my … 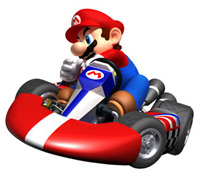 First and foremost, the Mario Kart games are about fast and furious karting action. In more recent titles, customization options have allowed the player to make more choices about the type of kart driven. In Mario Kart 7, this extended to a selection of kart bodies, tires, and gliders. Mario Kart 8 sets to repeat this level of customization.

Each vehicle choice affects the speed, acceleration, drifting or off-road capabilities of the kart. Here are the different levels of customization available in relevant titles: 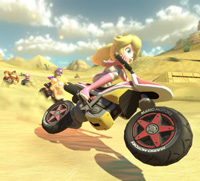 It may be a seemingly odd addition for a kart race, but Mario Kart Wii added variety to the series by introducing a completely new vehicle. Bikes handle differently to their four-wheeled kart companions and the main benefit is performing wheelies, adding a small amount of speed. The one-player mode 100cc cups introduce players by only using bikes. This helps ease players in but may frustrate anyone adamant on strictly riding in karts.

Overall, bikes are a fun distraction from karts and are set to return in Mario Kart 8. 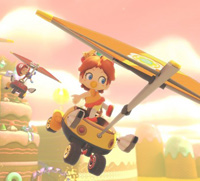 Mario Kart 7 added another new dimension – the power of flight! Well, gliding. Whenever your kart makes a significant jump, it will automatically sprout wings that glide you gracefully back to the track. You can still steer left and right, to a certain floaty extent, or dive to gain speed and reach the ground faster. There are often updrafts of wind spouting from suspiciously-placed pipes to swoosh you higher, or other precariously-placed obstacles to stifle your momentum.

Gliders are also set to make a return in Mario Kart 8. 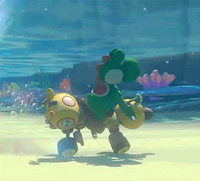 Another new addition thanks to Mario Kart 7 was the ability to drive underwater. Previously, falling into a water trap meant Lakitu came with his fishing pole to rescue you – no more! Now you can drive straight through the deepest of blue lagoons, your kart converting into a … some sort of water-proof kart. The transformation is subtle, your kart sprouts a neat propeller at the back and the vehicle responds appropriately, slowing slightly and taking corners more cautiously.

Underwater driving makes tracks more interesting and means less disruptions to each course, and will return in Mario Kart 8.

Mario Kart 8 will see the debut of another completely new vehicle type, the ATV. The four-wheeler ATV appears to be a cross between bikes and karts. Like bikes, while driving an ATV, characters can perform wheelies, boosting the player’s speed temporarily. If an ATV is rammed into while doing a wheelie, the player will lose speed and have to accelerate again. It is unknown whether ATVs can perform a Mini-Turbo while power sliding (see below). It will be interesting to see how these big boys handle when Mario Kart 8 is released later this month.

The entire premise of Mario Kart 8 hinges on one of the most interesting twists to the franchise, the anti-gravity mechanic. Like the glider and underwater karts, this feature switches on automatically as you scale the side of a course.

Last week, a Nintendo Direct showcased how this anti-gravity works, including details about a new move called the Spin Turbo. In anti-gravity mode, while you’re racing up walls or over ceilings – or down the side of a waterfall in the new Shy Guy Falls – avoiding objects is no longer necessarily the goal. Bumping into other karts provides a spin and a short burst of speed! You can also do a Spin Turbo by hitting one of the rotating bars in the courses. Check out some screen shots below.

Despite which vehicle you’re steering, there are many techniques that give the game a competitive edge to help Mario win that gold trophy.

Drifting allows your kart to handle twists and turns without compromising speed. This ability makes the series more like a serious racer than anything else! It’s one of the most important moves in the game, and makes a huge difference between a good driver and a great racer.

Drifting has been possible in every Mario Kart game to date, with some subtle differences over the years. Firstly, all titles apart from Mario Kart: Double Dash! require a hop before power sliding. Secondly, a Mini-Turbo was introduced in Mario Kart 64 that provides a brief burst of speed after a power slide. This is achieved by hitting left and right on the D-pad as you’re drifting. In Mario Kart Wii and 7, the Mini-Turbo became timer-based.

Did you know that in Mario Kart Wii, there are two types of Mini-Turbos, a blue and an orange version? Bikes can only receive a blue Mini-Turbo, while karts can receive the orange version that lasts twice as long – also known as a Super Mini-Turbo.

Each vehicle is also given a different Mini-Turbo rating, affecting how strong the vehicle’s Mini-Turbo will be. The Bullet Bike has the best mini-turbo, while the Jetsetter has the worst. Super Mini Turbos can also be performed in Mario Kart 7 and Mario Kart 8.

Mini-Turbos during a power slide

In Mario Kart Wii, players were given the opportunity to select automatic or manual drifting. It’s a great option for newcomers to the series, although the compromise is that a Mini-Turbo can’t be performed when drifting is set to automatic. We’re not sure if an auto-drifting option will return in Mario Kart 8 – though it’s likely.

This is a great little technique to give your kart a quick boost from the starting grid when the race first begins! Although you can perform this move in every title, there are some slightly different ways to implement it. You basically press and hold down the accelerator button during a certain phase of Lakitu’s light signals, just before the race commences:

Slip-streaming is fun, and a little cheeky. If you follow another kart (or bike) closely for more than a few seconds, you’ll receive a short boost from the draft of the vehicle in front. The move was first available in Mario Kart 64, then returned in Mario Kart DS to become a staple move, now also set for Mario Kart 8.

Are you a Mario Kart pro who knows all the tricks in the book? Let us know whether you use any of these methods in your racing.

As another Mario Kart feature draws to a close, it means we’re one step closer to Mario Kart 8’s release, now just over 3 weeks away!

We hope you’re having as much fun reading these posts as we are writing them – but we’re not done just yet! Join us next week when we’ll look at another Mario Kart fun factor – multiplayer mode. Whether playing locally or online, multiplayer is where this game truly comes alive in a fun yet competitive way.

Until then, happy racing! And don’t forget to leave your comments below.