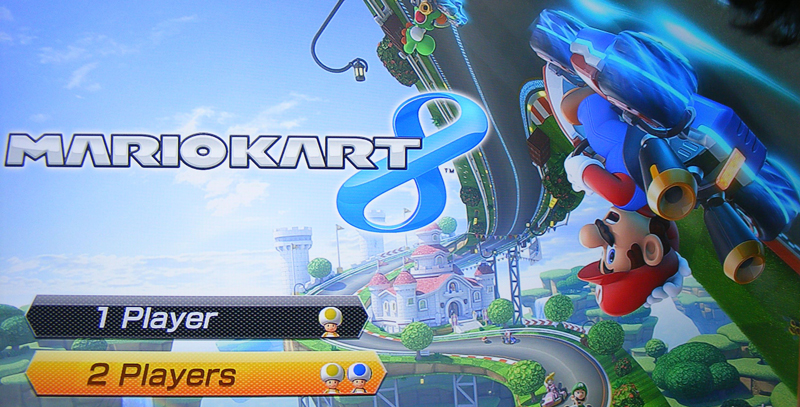 Mario Kart is fun to play solo, but let’s face it – it’s absolutely brilliant when played with friends, family, or anyone else willing to compete with you for a gold trophy!

Today we’ll look more closely at the history of the multiplayer experience of Mario Kart, and why it keeps us coming back for more.

Mario Kart is all about kart racing, right? Of course, but there’s much more to it than that. There are multiple modes available, most of which support multiple players:

First and most obvious is the Grand Prix mode. This is where you can race against the CPU in one of the standard cup sets to help unlock further cups, karts and more characters. They are generally one player affairs, although most titles let you team up with at least one other local player. Mario Kart Wii is an odd exception to this rule, which was the cause of complaints from fans.

Thankfully, Mario Kart 8 looks set to return to the more favorable multiplayer Grand Prix. Lately there have even been rumors that Mario Kart 8 will allow up to four local players to compete in the Grand Prix mode! We’ll know for sure soon enough… 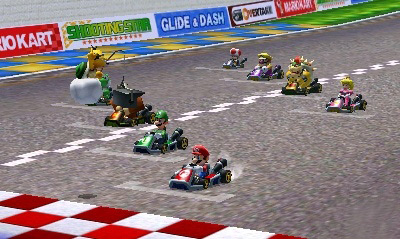 This is the place for customized multiplayer racing! Here you can race your friends (or foes) by selecting from available tracks – usually tracks that have already been unlocked in Grand Prix mode. This is also where you can race online, but we’ll get to that later. The number of local players varies from title to title:

Other customization options are available, depending on the title. For example, in Mario Kart Wii, the Vs Mode only allows 100cc speeds and the selection of one track at a time. In Mario Kart DS, you can choose from any speed, and any number of tracks, including a random selection of all tracks! Mario Kart 8 looks set to retain the more customized approach of the DS (and 3DS) versions. 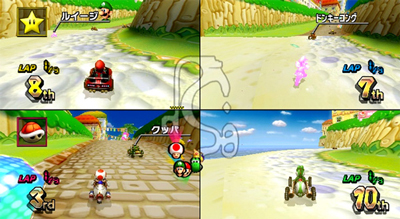 Racing for gold trophies is fun, but it’s only half of the game! The thing that makes Mario Kart so special is that there is a completely different way to pass the time in a kart – namely, Battle Mode. Here, your goal is not to finish first, but to literally survive the longest within various closed arenas of different shapes and sizes. There are different versions of Battle Mode, the most famous of which is the traditional Balloon Battle, introduced in Super Mario Kart, You begin with 3 balloons, and the goal is to pop your competitors’ balloons with items!

As one of the most popular parts of the Mario Kart franchise, we’ll be dedicating an entire post to these chaotic arenas next week. 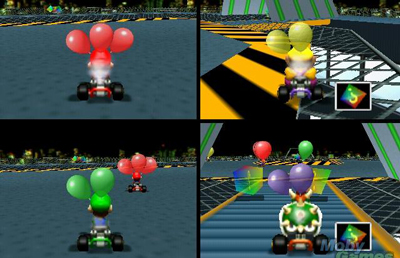 The original Super Mario Kart was made for 1 or 2 players, but since its 1997 sequel, Mario Kart 64, we’ve been able to race through the Mushroom Kingdom with at least up to four players simultaneously. Mario Kart: Super Circuit on the Game Boy Advance used link cables to allow up to four units to connect and play, without the requirement of 4 cartridges.

Warp Pipe Project for the GameCube

It was 2003’s Mario Kart: Double Dash! that expanded the local multiplayer scene to include online access via a local area network (LAN) for up to 8 GameCubes. It was also (unofficially) possible to play online over the Internet using certain tricks: anyone remember the Warp Pipe Project? This utility fooled the GameCube into thinking it was on a LAN, whilst actually connecting through the Internet.

The world is not enough!

In order to reduce load times and lag, there were a few changes to the game when playing online over a wi-fi connection (or locally when only a single cartridge is used):

Despite this, there were still dropout and lag issues experienced from time to time, particularly for players on slower connections. Overall, it was a fun way to interact with other Mario Kart fans around the world. We won’t mention the horrendous friend code system though.

The online fun continued on the Wii version but was still plagued by lag issues: it was common to be disconnected from a race, or make it to the end with fewer racers than you started with. You could also experience karts suddenly appearing right in front of you! Sadly, you were never completely sure whether this was due to dreadful lag, or rampant cheating … 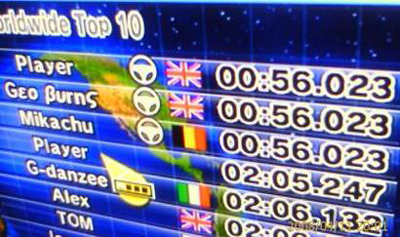 Cheating is an unfortunate side-effect of online playing, and was particularly rampant in Mario Kart Wii due to the amount of hacking possible with that system. There were countless instances of players with infinite supplies of blue shells, or star powers, and although Nintendo banned hacking over the years, the hackers always managed to catch up again.

Other cheating has been possible through exploiting glitches in tracks. Remember that massive glitch in Mario Kart 7’s Maka Wuhu Loop (Wuhu Mountain Loop in Europe/Australia)? This glitch has thankfully been patched – it increasingly became the situation where players would always select this track just to cheat. 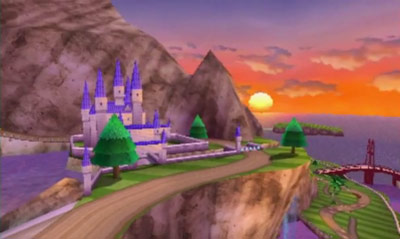 Before the patch, there was a huge shortcut that required the player to drive off the circuit into a water trap, respawning on a different part of the track and cutting out a good third of the race. It was frustrating and very nearly ruined the experience, causing many players to simply switch off if that track was selected.

Were you the victim of compromised online racing in any of the previous Mario Kart installments? Let us know about your experiences below.

Next week we’ll extend on our multiplayer action by dedicating a whole feature to the other half of Mario Kart – the hugely popular Battle Mode. We’ll look at the courses over the years and the different modes available.

Be sure to check out our previous Why We Love Mario Kart posts and as always, let us know your thoughts in the comments section – we want to know how excited you are for this game! With only just over 2 weeks until the release of Mario Kart 8, watch for our review in the next few days!

Until then, happy racing!