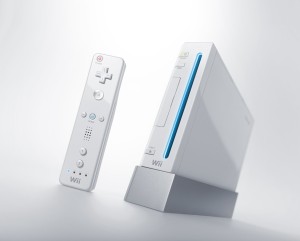 The latest issue of Game Informer magazine has an interview with Nintendo of America’s President, Reggie Fils-Aime. In this interview, the Regginator dropped a couple bombs. He talked about ways the WiiConnect24 feature would work in certain games. He also had this to say about the mystery of the front cover on Wii:

What is the little door on the front of the unit?

Fils-Aime: That is where an SD card goes. That’s storable media. And on top, are the attachments for the GameCube controllers.

So will SD cards be the primary storage medium?

Fils-Aime: It will be one of the memory mediums, and it’s the only one that we’ve announced.

Reggie has confirmed what a lot of people expected, that the front slot would indeed be used for SD cards. He also says that this will not be the only method of storage on the system. We already know the Wii will hold 512MB of onboard flash memory. And we also know that the Wii has two USB ports on the back of the console.

Sounds to me like Nintendo is covering its bases when it comes to having plenty of storage for their games and their Virtual Console service.