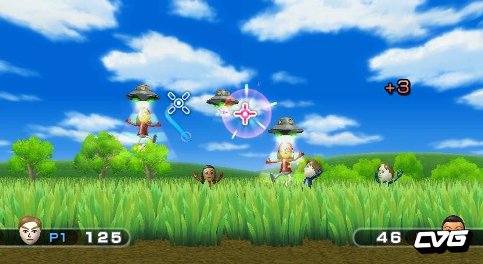 Wii Play is officially available as of today.  A Valentine’s Day miracle of sorts for Wii lovers ;)

The realistic game play of Wii Sports™ turned parents and grandparents into gamers, and launched a new Wii-based party and fitness craze. Today Nintendo builds on the momentum with the arrival of Wii Play™, a collection of nine new games in the Wii Sports style that lets players fish, play pool or shoot targets with the motion-sensitive Wii Remote. Wii Play joins Wii Sports as the party-game centerpiece at family get-togethers and grown-up game nights. To emphasize the multiplayer nature of the game, Wii Play comes packaged with a Wii Remote. The combo could also be a great way to show your valentine how much you’d like to play together!

Wii Play includes games like Fishing, which uses the Wii Remote like a fishing rod; Billiards, which uses the Wii Remote as a pool cue; and Shooting Range, a target practice game played in the style of the classic Duck Hunt® game from the Nintendo Entertainment System®. Other games include Table Tennis (use paddles to rally for points), Charge! (control a charging cow), Tanks! (a tank battle) and Laser Hockey (use the Wii Remote as an air hockey paddle). Two games make extensive use of players’ Mii™ caricatures. Pose Mii asks players to orient their Miis in a variety of different positions to match silhouettes, while Find Mii requires them to locate specific Miis within an ever-growing crowd.

“Wii Play builds on the types of games and experiences people have come to love in Wii Sports,” says George Harrison, Nintendo of America’s senior vice president of marketing and corporate communications. “Millions of people around the world are recognizing Wii as the future of gaming. We are changing how people play games, who plays and how many play.”

All the games in Wii Play are easy to learn and difficult to put down. Veterans and newcomers alike will discover fun and entertaining challenges that will have friends and family competing for hours on end. Core gamers can invite their non-gaming friends and relatives to give Wii Play a try, thereby bridging the gap between the two groups and expanding the world of video games to new audiences.

The worldwide innovator in the creation of interactive entertainment, Nintendo Co., Ltd., of Kyoto, Japan, manufactures and markets hardware and software for its Wii™, Nintendo DS™, Game Boy® Advance and Nintendo GameCube™ systems. Since 1983, Nintendo has sold nearly 2.2 billion video games and more than 387 million hardware units globally, and has created industry icons like Mario™, Donkey Kong®, Metroid®, Zelda™ and Pokémon®. A wholly owned subsidiary, Nintendo of America Inc., based in Redmond, Wash., serves as headquarters for Nintendo’s operations in the Western Hemisphere. For more information about Nintendo, visit the company’s Web site at www.nintendo.com.