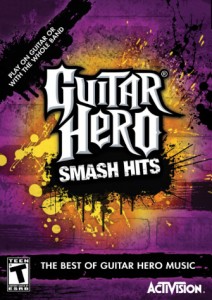 Guitar Hero Smash Hits is the latest game in the GH franchise.  This game isn’t band-specific like some of the other GH games, but rather it takes many of the fan favorite songs from past games and allows players to use the drums and microphone that they introduced with Guitar Hero World Tour. 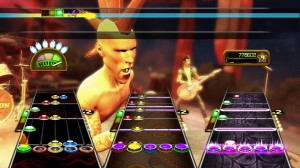 Guitar Hero Smash Hits starts off like many other Guitar Hero games by starting as a lowly band, and eventually ascending to rock-star greatness!  Much of the style of the first few games is incorporated throughout the single-player mode which was nice to see.  I never played Guitar Hero 1 or 2, so I may come at this review a little differently than others but I’ll try and keep a balanced approach.  Since I started playing Guitar Hero with GH:III, there were quite a few tracks that I had never played before.  Some of them were pretty good, but I felt like I didn’t miss much from the first 2 games, or at least didn’t feel that the tracks were really the ‘best’ of the bunch.  I played Through the Fire and Flames, which is always a lot of fun, and challenging at the same time!  What makes Smash Hits unique, is now you can invite some friends over and play the guitar, bass, and now the drums and microphone. 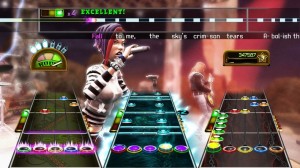 The fact that you can now play some of the classic Guitar Hero songs as a full band is pretty cool, but I really wish there was more to the game.  Sure, you still have multiplayer modes, drum tutorials, online multiplayer/co-op, but I feel like there should’ve been more, new songs to choose from.  One cool feature that was introduced in Guitar Hero: Metallica, is the ability to use 2 drum pedals for the Expert+ difficulty.  Drummers beware: this is not an easy feat!

If you’re like me and haven’t played some of the original Guitar Hero games, then Smash Hits is pretty fun cause you’ll get songs that are new to you and still get to play them using all the band instruments.  If you’ve already played hours and hours of the original games, you’re not going to find much here to really warrant a $50 price tag.  Maybe if you can find a good deal, but there really isn’t a whole lot of new content to really be worth $50.  I would’ve been happier with a $30 price tag or even $20 like some of the track packs for Rock Band.