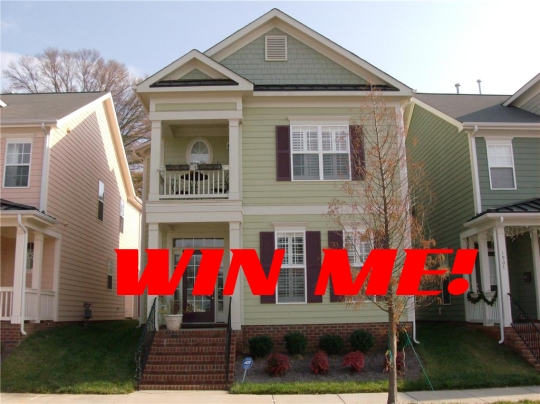 Win A Wii, And A Fully Furnished House!!!

This auction is for one (1) Brand New Never Opened Nintendo Wii Console Sports Edition with 5 Games. This also includes Wii Play Bundle that comes with an extra Remote and 9 Wii Play Games. With the purchase of the Wii console, we will also throw in for free our Charlotte, North Carolina 2-story, single-family home. This house was built and purchased new in 2006 for $240,000 and is within walking distance to major attractions such as Bank of America Stadium (Carolina Panthers) & Bobcats Arena (Charlotte Bobcats). You are also only minutes away from the Charlotte Douglas International Airport, I-485, I-85, I-77, and many uptown restaurants. Everything in the house is yours if wanted, including a Brand New 46″ Sony Bravia Full 1080p LCD HDTV along with all the furniture and appliances. We will personally drive and deliver this Wii with all the accessories listed once payment has been received and cleared. Once we hand you the Wii, we will also hand you the car keys and house keys to both our home in Charlotte and a 2002 BMW 330i. We will even have you(1) and up to 5 other family members or friends (for a total of 6) flown in to see the house and city and will also pay to have you moved up to Charlotte from anywhere in the continental United States. This is to be the most DELUXE and EXCLUSIVE listing for any Wii that there will ever be on eBay. If you choose, you will have nothing to do but to hop on a plane with 5 of your closest friends or family members. We’ll handle all the rest for you. We will personally deliver these items to the winning bidder on the day of his/her choice, including Christmas Day, December 25, 2007.

Wow! I guess this is a good way to push an item that isn’t selling to well. Throw in a house, everyone wants a house.