As part of Nintendo’s latest Direct presentation, Xenoblade Chronicles 2 was shown off, and viewers got a taste of the combat and the world the game takes place in. Launching on December 1st, you must guide Rex on his journey through the land of Alrest as he seeks to guide Pyra to her lost home of Elysium. Along with the normal copy, a special edition of the game will be available at launch, and it will include a soundtrack CD, a metal game case, and a 220-page hardbound art book. 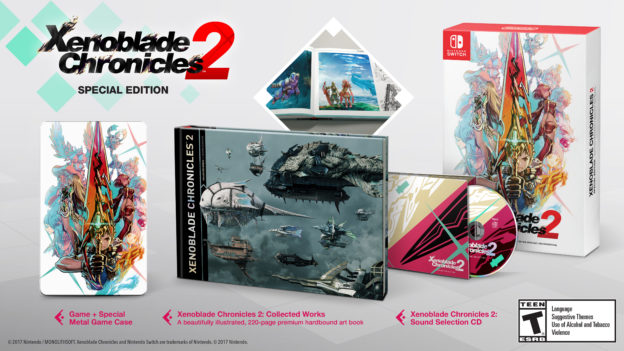 With multiple Titans to explore, each with their own unique environments, Rex and company will have to harness the powers of their Blades. Blades, like Pyra, are mysterious beings that grant power to their users, known as Drivers. There are a large variety of Blades to form bonds with, and depending on which Blades you choose, you’ll have access to different Arts that your character can perform.

Xenoblade Chronicles 2 looks to keep the tradition alive with massive areas to explore. Having the ability to pick and choose what Blades to bond with adds a new level of customization to your characters, and the combat appears to be just as addictive as the first game. Will you be picking up this title when it launches in December? Are you interested in the special edition? Let us hear your voice in a comment below.