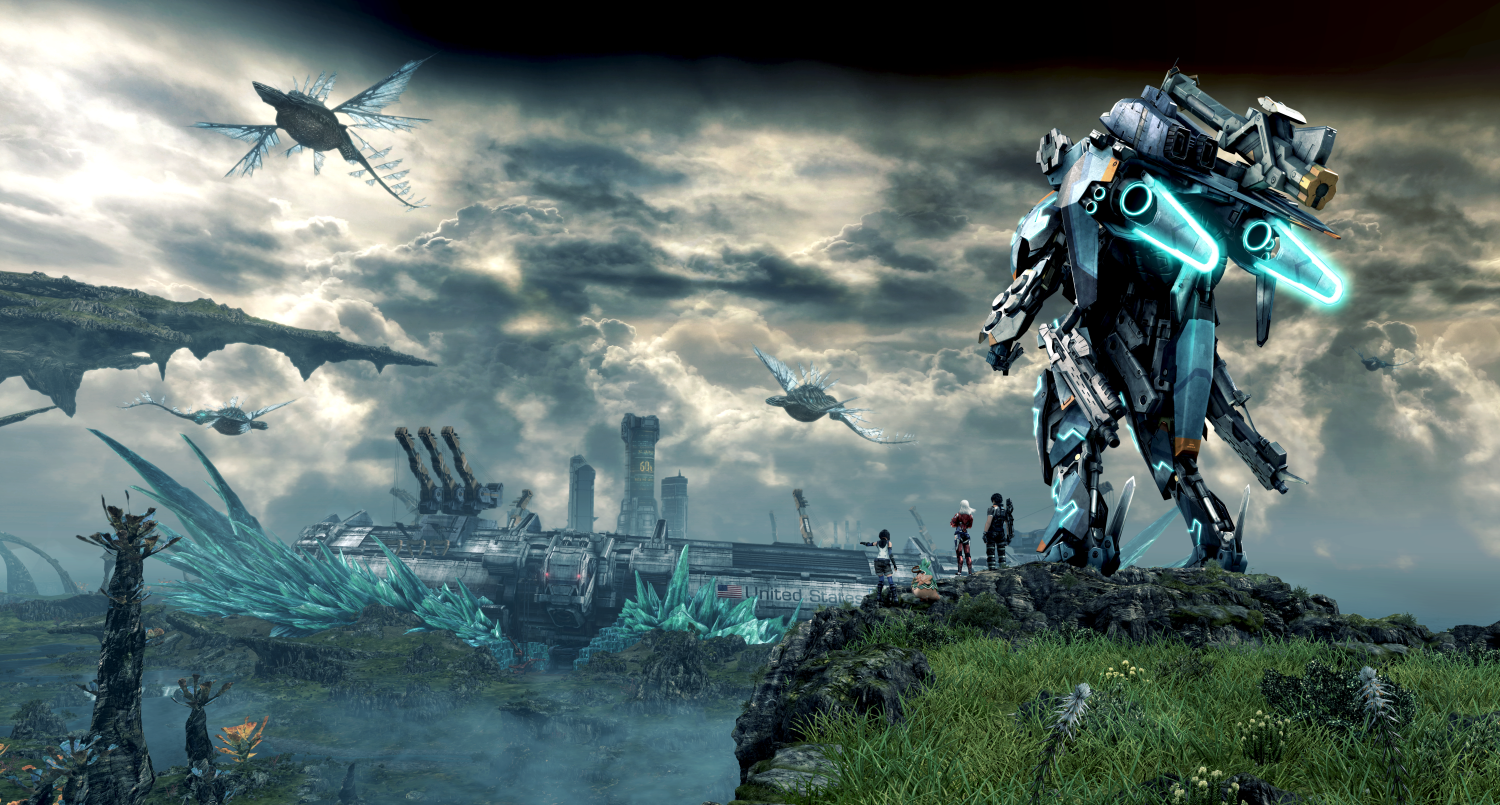 Those of you looking for a review score may want to sit down for this; there will be no review score for this entry.  Due to various circumstances beyond our control, I obtained our copy a bit later than most reviewers.  I’ll detail the other major delay in my progressing through the game further along in this entry.  What you need to know now, is that I feel as though I have not seen enough of the game in order to give it a proper score.  So if there is no score, then what is this?  What you are looking at is the first of a series of thoughts as I progress through the game.  Only when I am completely finished with this massive undertaking will I finally assign it a score.

Before we begin, I’ll let you know exactly where I am in Monolith Soft’s latest title.  Without being too specific, here is my status:

XCX’s story is more concerned with the entirety of New Los Angeles, rather than a core group of protagonists.  At this point in time, I cannot say much about the story itself, but I can give you an idea on how the story is presented.  The main story is presented in chapters that have a definite beginning, middle, and end.  Unfortunately, you won’t get a sense on how the story is progressing through the story itself, but through the mission details that pop up, (e.g. Chapter 3 Part 3/5).  Relegating the story chapters to mission statements downplays its significance, which is a shame, because Monolith Soft still knows how to set up intrigue and suspense.

Starring in XCX is a character of your creation, rather than a character with a pre-established connection to the others.  Surprisingly, in contrast to all of the choices and options in the game, how you customize your character is limited. Sure, your skin can be one of sixty colors, but how you style your hair is down to only around ten choices; the eyes and facial structure have around the same amount of options.  While you can choose a voice for your character, don’t expect to hear a peep out of them outside of battle.  Instead, your characters dialogue is limited to shakes, nods, and emphatic arm movements.  Without spoiling, there is one scene in particular that would have benefited incredibly from the vocals of our silent hero. 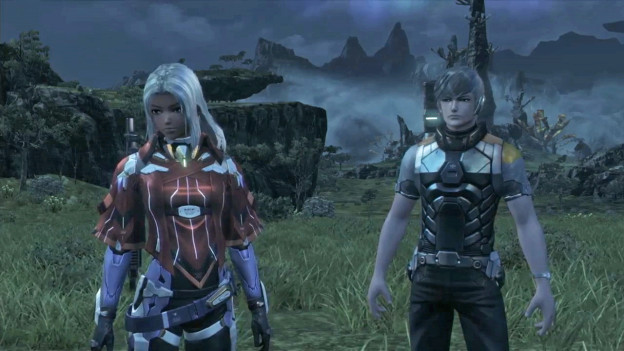 The result is that your custom character feels much more along for the ride.  When choices need to be made during cut-scenes, the scene is paused so the player can make their response.  This Zack Morris-esque break completely breaks the immersion and pacing, and can take away a lot of emotional power in scenes.  While main quests may have taken a hit, side quests are given a bit more TLC.  Most of the quests themselves are still the same (kill these things, gather those things, you know the drill), but many quests are preceded and concluded with quick cut-scenes, which make the residents of NLA that much more fleshed out and important, rather than a sea of NPCs floating in the background of the real story.

Most quests have objective markers, pointing out where players need to travel.  In any other game, objective markers may make quests boring and more of a chore than an adventure, but given the sheer vastness of each continent, the objective markers feel like a necessary evil; this makes things all the more frustrating when suddenly, the marker is nowhere to be found.  I’ve spent hours searching for a certain type of indigen (read: monster) because, for reasons unknown to me, the game did not want to tell me where they lived.  Only after a three-hour search did I finally track those things down and finish the quest.  That issue was a sign of things to come, as things came to a halt when I was trapped in an affinity quest searching for something that is a third the size of a human.  The only clue I had to its whereabouts was “somewhere in the forest”.  Now, I am perfectly willing to admit that maybe I’ve overlooked something, but I spent ten hours searching the continent of Noctilum for this one single thing.  The objective never changed when I found out I needed to seek out this tiny thing, nor did the marker move away from my previous objective, so I wasn’t even sure the quest activated properly.  Even worse, I could not continue the story without first completing the affinity quest, so I was stuck.  Eventually, I cut my loss, and restarted the game; I was forty hours into the game at the time. 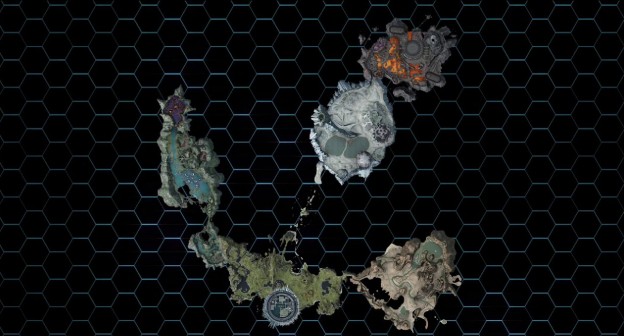 This brings me to another warning about Xenoblade Chronicles X, everything you do will reside in one single save file, a la Pokémon.  Given the massive size of this game, having multiple save files should be natural.  At the very least, multiple save files could have rescued me from that affinity quest debacle.  Looking at the silver lining, restarting the game gave me a chance to approach the game using different classes and divisions.

In the first run-through, I was part of Pathfinder, a group dedicated to expanding FrontierNet, your interactive map, and main means of travel throughout the five continents.  This time around, I am under the Interceptors, who thrive in battle.  Each division can give out different bonuses to yourself and others online during battle, which could give you that essential edge in a tough battle.  Aside from these bonuses, my run-throughs did not have many major differences.  Battles never felt any easier or harder depending on my division.  You’ll still want to expand FrontierNet as much as possible while installing probes to increase the amount of materials you acquire, your paycheck, and creating more fast-travel points.  Otherwise, what truly matters will be the classes you choose as you progress through the game.

The new class system is, by far, the strongest element in XCX.   The various classes available to your character can really help customize your arts palette, and gives players dozens of ways to approach a fight.  Arts are less dependent on class themselves, and are tied to certain weapons (e.g. knife art, sword art, rifle art).  Each class really changes how you may approach a battle, and it is not just a simple choice of whether to hang back and shoot or get in the fray.  Having certain combinations of arts can effect everything on how you support your comrades, cripple the enemy, or even the pace at which you auto-attack.  There is no one single class that is perfect for every job, lending excitement to every battle and keeping the gameplay fresh even after dozens of hours into the campaign.

Aside from arts, characters will also learn new skills from leveling up their classes.  Whereas arts are active in battle, skills are passive perks, that can give your character an essential edge. Like arts, characters can only activate so many skills at once, preventing them from becoming a powerhouse.  Both arts and skills can be upgraded using battle points, but the cost essentially doubles after each upgrade.  Since the BP pool is shared, you’ll have to think carefully on how you want to spend your points. 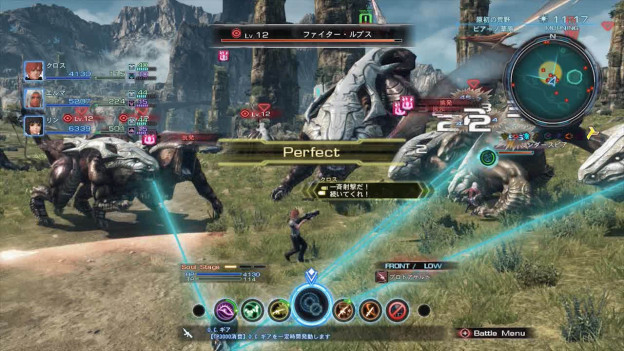 XCX looks to expand on the active battle system established in its predecessor.  Arts are activated via the arts palette.  Each art now has a second cool down period which grants users bonus effects such as added damage or immediate reuse, so players will need to decide if they want to act now, or wait and reap the rewards later.  Soul voices, are not only your primary method of healing, but can dole out additional benefits such as toppling your opponent, so it’s almost always beneficial to wait for commands.  On the other hand, using arts may give you a chance to issue a command yourself, again, leading to a chance to heal up.  All of these factors make every move count, so battles have less of a chance of devolving into mindless grinding.

That is everything about the game I am going to share today.  Nearly every aspect of the game is incredible, and a must-have for JRPG fans.  On the other hand, those picking up the game should be aware of issues mentioned above, or they may leave the experience on a sour note.

Next time: Skells, and how they affect exploration on the biggest world to ever hit a Nintendo console.