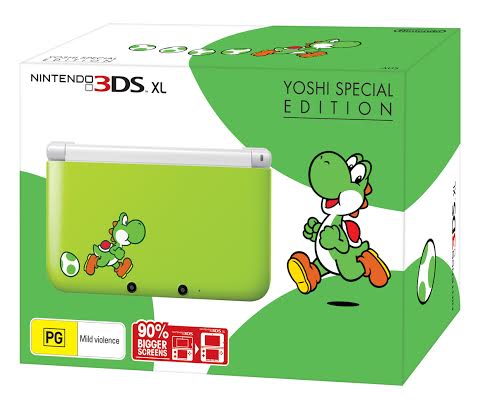 A few days ago we spoke about the supposed Limited Edition Yoshi 3DS XL that would be releasing to coincide with the release of Yoshi’s New Island on the 3DS.

Although the original mock up was a fan creation, we can now reveal the official Nintendo 3DS XL Yoshi Special Edition which will also release on 15th March, alongside the game.

The software isn’t included however, so you’ll need to purchase a separate copy of the game.

Here’s what the Nintendo PR had to say:

“Yoshi’s New Island: Flutter-jumping its way to stores and Nintendo eShop for Nintendo 3DS on 15th March, Yoshi’s New Island will feature big eggs called Mega Eggdozers, as well as Metal Eggdozers that enable Yoshi to venture underwater. Using the gyro controls of the Nintendo 3DS console, maneuver a Submarine Yoshi or Jackhammer Yoshi, while transforming into a “Super Yoshi” lets you fly like a shooting star or run along walls and ceilings at will! Players who are having trouble completing a level might see the appearance of Flutter Wings, which let Yoshi fly through the air. In a final piece of Yoshi news, a Nintendo 3DS XL Yoshi Special Edition* will also release on 15th March, with the design incorporating the familiar green and white of Yoshi.

*Please note that the Yoshi’s New Island software is not included.”

The official Yoshi system is certainly different to the spotty fan made design. What do you think of the system? Is it how you hoped it would look? Or maybe you preferred the mock up design. Let us know below.