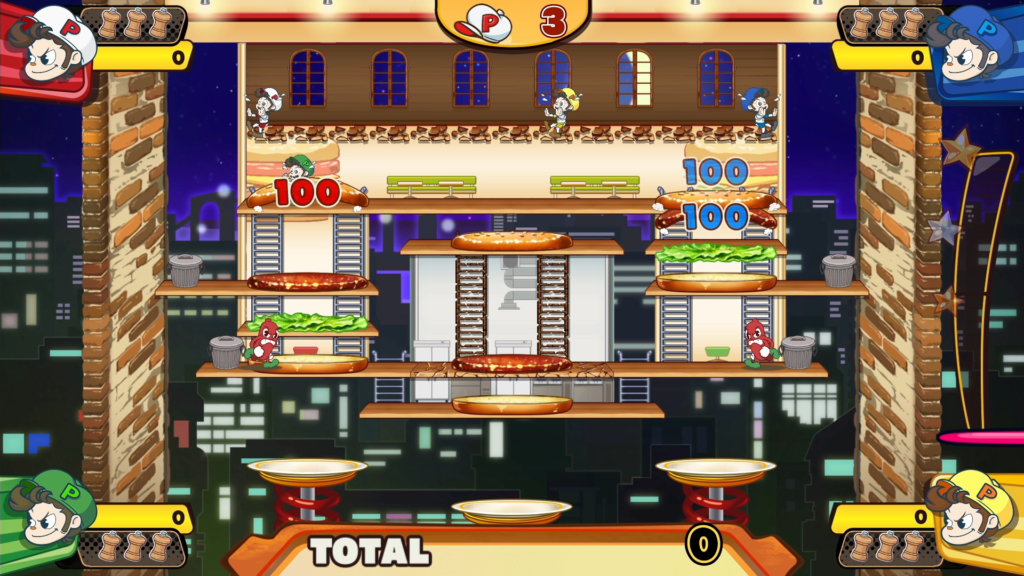 I had the chance to sample XSEED Games’ BurgerTime Party back at E3 this summer, and it certainly whet my appetite. Now, hungry gamers can accept their invitation to the party by preordering the game which will be released exclusively for the Nintendo Switch on October 8th.

Developed by G-MODE, BurgerTime Party updates the action of the 1982 arcade classic in a way that makes it wonderfully fun for modern gamers while not alienating retro fans, a feat that’s often quite hard to pull off. The game features over 100 stages in which chef Peter Pepper must build burgers while avoiding various condiments and other menu items. This time around, Peter will also be facing kitchen hazards such as freezing ladders, oil spills, and fiery floors, but he can get some help; BurgerTimer Pary includes local multiplayer modes that allow 2 to 4 players to work together via co-op or to take control of the enemies in “Battle Burger” mode.

In the summary of my E3 hands-on, I wrote:

… it was pretty much what I’d hoped it would be. I tried both co-op and competitive with an Xseed floor rep and found the gameplay to be smooth and well-balanced. Controls were pleasantly precise, which is exceptionally important when you’re trying to dodge enemies with a quick ladder climb.

The graphics have, of course, been modernized with more depth and texture. I found the designs got a little busy at times and interfered with the action, but I imagine I’ll get used to that.

We’ll find if I’m able to do on October 8th.

Switch gamers will have two ways to join the fun as BurgerTime Party will be available digitally at the Nintendo eShop for $19.99 and physically with an MSRP of $29.99. For more information (and to preorder the physical edition), visit store.xseedgames.com.