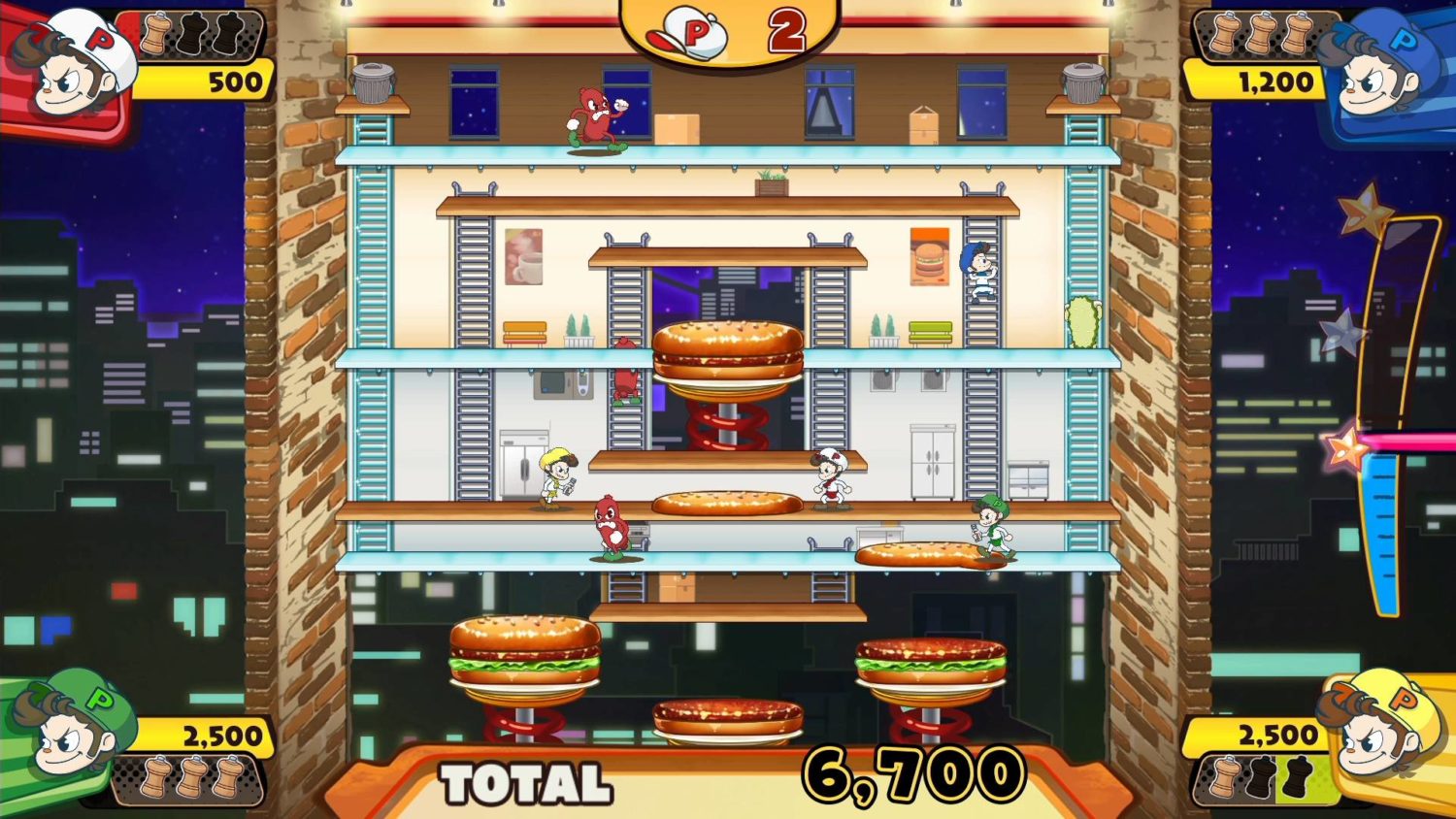 One of my first meetings at E3 last month was facilitated by a PR rep who was also showing off My Arcade’s BurgerTime Micro Player. When I told her I have a meeting set up with Xseed to demo BurgerTime Party for the Switch, she looked at me as I’d just sprouted antennae from my forehead.

“Are you sure it’s Xseed?” she asked.

“Have they added anime girls?”

I laughed and told her I’d find out soon enough, and she assured me she’d check it out, too, as she loved both BurgerTime and Xseed. I hope she did because BurgerTime Party looks to be an outstanding multiplayer arcade game even if you’ve never before worn the apron of Peter Pepper. 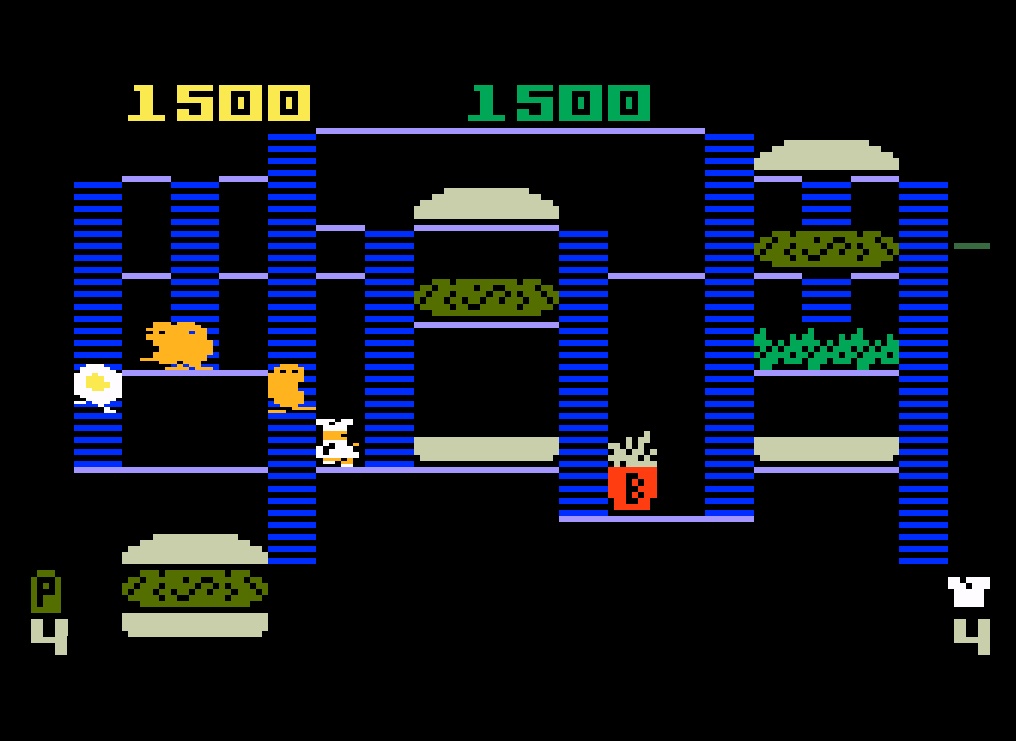 My brothers and I would play it endlessly, constantly fighting for the high score. If memory serves, it’s the only game where we kept a running tally of who had most recently bested whom. And now, with BurgerTime Party, we’ll be able to play it online.

BurgerTime has somewhat of a Donkey Kong level-two-style-setup, except instead of releasing girders you’re releasing cheeseburger components. You have to run over buns, lettuce, patties, etc. to get them to drop to the next level, all the while avoiding renegade pickles, eggs, and hot dogs. You lose a life if they touch you, but you can get rid of them (temporarily) by dropping items on them or freeze them by spraying them with pepper. If an enemy is standing on a hamburger part when you drop it, the part will fall multiple levels instead of one and the enemy will fall with it.

The game was frantic fun with one player, but now it’s a party. Players can work together to make the cheeseburgers, or one can be Peter Pepper while the others become the angry food and chase him down. If you’re working together you even now have time to rescue a fallen co-chef.

I was able to spend some time playing BurgerTime Party at E3, and it was pretty much what I’d hoped it would be. I tried both co-op and competitive with an Xseed floor rep and found the gameplay to be smooth and well-balanced. Controls were pleasantly precise, which is exceptionally important when you’re trying to dodge enemies with a quick ladder climb.

The graphics have, of course, been modernized with more depth and texture. I found the designs got a little busy at times and interfered with the action, but I imagine I’ll get used to that. It would be cool if there was a retro display option, but that’s a little much to ask for. 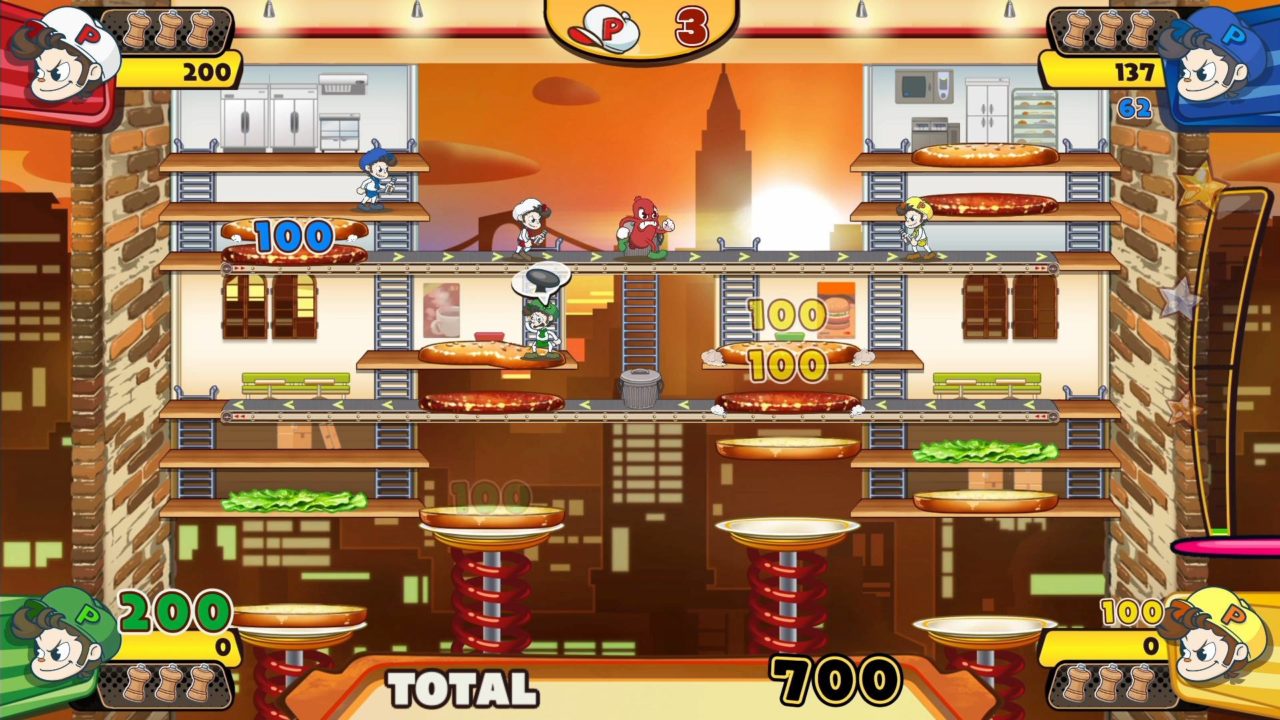 I had more fun with the competitive option that morning, but it’s hard to get into a co-op groove on the noisy E3 show floor. Whether you’re playing multiplayer or single player, BurgerTime fans will be happy to note that the core gameplay is solidly in place…although it seems that your pepper is now regenerated over time as opposed to via item pickup.

The Xseed rep wasn’t able to tell me whether there’ll be online multiplayer (Xseed has only announced local 2- to 4-player), but hopefully that will happen. Either way, whether you’re into classic arcade games or are just looking for another easy to pick up multiplayer game, BurgerTime Party is one to keep on the burner until it’s served up later this year.