Xenoblade Chronicles 2 feels like a lateral movement rather than a strong step forward for the series. For all of the elements that XC2 improves, the game falters on others. The battle system is more focused and refined (even if it looks simplified at first glance), with each of the elements building on another. The blades themselves work well in their dual roles of both the game’s central battle mechanic and characters in the world of Alrest. However most of the main cast, while fun, aren’t incredibly engaging and often feel one-note. 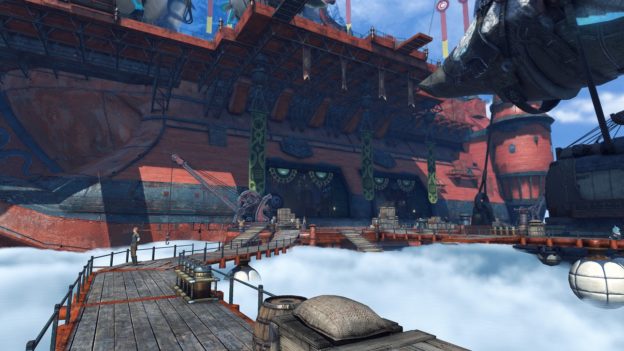 The main story doesn’t feel as hard-hitting as previous stories, opting for a more light-hearted tone. Rex joins up with the blade, Pyra, and promises to take her to Elysium, a legendary land at the top of the World Tree. Along the way, Rex and Co. must fend off the members of Torna, as well as others who want Pyra’s power for their own. Personal conflicts within the protagonists arise, but most are quickly resolved within the same act. So when the story tried to tug on my heart-strings, I couldn’t manage to empathize with their plight. Only Rex, Nia, and Pyra go through any amount of growth throughout the story.

Side-quests are not nearly as numerous in XC2 as they were in previous titles, but they are often times more involved, requiring the players to fulfil multiple objectives. Unfortunately, most of these objectives boil down to, “go to X and gather Y”. For your time, these side-quests also hand out a decent amount of experience. I’d wager for every level I gained fighting monsters, I gained three simply doing a few side-quests. The side-quests focusing on unique blades are a brilliant way to flesh out the characters, and helps players see them as more than just weapons or tools (one of the game’s central themes). Both the story and the gameplay are completely focused around blades. As you explore the world, you’ll come across spots that require a blade’s field skills, such as earth mastery or lock picking, to access. Most of these are off the beaten path, but you will come across more than a few roadblocks in the main quest unless you have the right combination of field skills. Since field skills can only be increased through battles and merc missions, they are a good way to encourage players to experiment with different combinations. However, constantly having to shuffle your blades around just to get through a roadblock can be a tad annoying. Blades also provide your means of fighting, doling out not only power, but buffs, debuffs, and everything in-between. There is not a lot of overlap between battle skills, which means there is plenty of room to try out new strategies. Blades of the same weapon class all share from the same arts pool, so don’t worry about losing your progress on your art levels if you decide to try out another blade. Gaining new blades is an exercise that becomes more frustrating the more you play the game. New Blades are drawn from core crystals, and their strength and stats depend on the driver’s luck and idea stats. With each draw, characters can gain either a common Blade or a unique Blade. Whilst some unique blades are acquired via side-quests or story-events, the majority are simply drawn at random. Further along in the game, you come across rare and legendary core crystals which increase the odds of drawing a unique blade. The legendary crystals, as rare as they are, still do not guarantee a unique Blade, making the process all the more disparaging if another common blade arrives. Unique Blades are also more powerful than their common counterparts, making the latter group’s usefulness relegated to Merc Missions and field skills. Xenoblade Chronicles 2 very slowly integrates all of the battle elements throughout the first four chapters. You won’t even be able to engage with three blades until after chapter three, which can be a good 30 hours into the game. I understand that Monolith Soft doesn’t want players too overwhelmed with all of the battle system’s mechanics, but I doubt having to manage a third blade a bit sooner would have burnt anyone out.

I won’t be able to close out this review until I discuss the game’s English voice-acting. I gave it a good shake, listening to the voices well into Chapter 5, but after listening to one of said chapters more crucial and emotional cut scenes, I decided to switch over to the Japanese V/O. Many of the character’s deliveries don’t add up to the scene’s context, and it took away a lot of the story’s impact. The voices (both English and Japanese), also impact the gameplay, as the characters will frequently insert their two cents during battle, often times over each other. When your three drivers are up against a party of other humans, the whole affair becomes a cacophony of noise. You do get used to it all, but they are still a step down from the in-battle conversations that occur in both Xenoblade Chronicles and Xenoblade Chronicles X. Despite all of its flaws, Xenoblade Chronicles 2 is still a very enjoyable experience. The battle system is as fun as ever, and you will still get that satisfaction from mastering the system and taking down a tough foe. The team at Monolith Soft also stay in top form when it comes to integrating gameplay and world-building. That’s what makes it a shame that XC2’s world and characters are not as robust as in previous titles. The quality of the English voice-acting also did not help Xenoblade Chronicles 2’s case, and even though we were given the option to listen to the Japanese V/O, I can’t help but be disappointed. Hardcore Xenoblade fans will (and probably already have) picked up this game, but if you can look past the flaws, Xenoblade Chronicles 2 is still a quality RPG that many will spend months sinking their teeth into.