Shadow Puppeteer fell into my review queue with no real expectations attached.  I took the game largely because I knew I’d have a willing co-op partner in my wife.  Solo players can technically participate also, but I’ll explain why they’re best not to.  Keep reading to learn more about this “strange, yet beautiful local co-op adventure.” 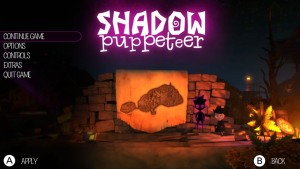 Taking its cue from a scene in Peter Pan, you control a boy separated from his shadow.  It’s definitely a kid’s fairy tale, but “Violence” was enough to earn it a Teen rating.  I personally fail to see how it warrants above an Everyone 10+, but I digress.  With no narrative, the story is largely left to the imagination, and I don’t mind that.  Can you solve the mystery of the Shadow Puppeteer? 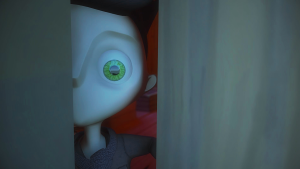 This adventure has an emphasis on puzzles involving the manipulation of light.  It’s a 2D/3D hybrid – the boy has full range of movement, but his shadow is on a linear path.  What one interacts with will impact the other.  A small selection of tools gradually get introduced to expand the gameplay.  It’s a fairly successful design for a co-op adventure and (once we adjusted the brightness to an appropriate level) my wife and I did enjoy watching our cooperation lead to advancement. 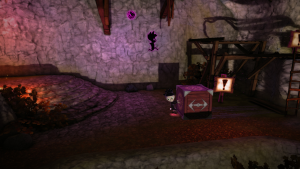 As a single player game however, Shadow Puppeteer plays just shy of dreadfully.  Controlling two characters is challenging enough, but simultaneous movement during faster paced scenes is something else entirely.  Not bad for puzzles solving; terrible for quick platforming and boss fights.  Certainly it’s unbalanced, but I’d also argue it’s at times outright unfair.  Although I did make progress, I was more relieved than satisfied.  Simply put, I didn’t find the experience fun.  If you’re a solo only gamer, I’d recommend staying away as you’re bound to be frustrated. 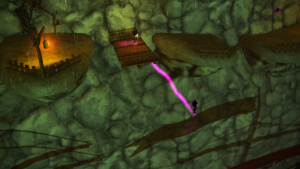 So single player is rather a bust, but can I at least recommend it for co-op?  Yes, but with many disclaimers in place. This game has some irrefutable technical issues.  Stutter is a fairly consistent and undesirable companion.  At times the framerate chugs to levels I can’t recall seeing in a Wii U eShop release.  It’s no mere visual annoyance; it affects the gameplay, causing random deaths.  When the game pauses, it’s hit-or-miss where characters might reappear up on the screen.  On a lesser (but still very annoying) note, the frequent load times often topped 30 seconds.  Near the end we sat through a solid black screen for over a minute (thinking the game had froze) before the loading animation actually began!  Load times for the loading screens?

Shadow Puppeteer has a winning premise that’s ruined by a poor single player mode, and multiple, sizable, technical issues.  While we did enjoy the co-op puzzles, the soundtrack (with unlockable music player), and the different replay options, the overall package is too weighed down.  If you’re interested, there’s the Steam version to look into.  Until the much needed patch comes, this might be one Wii U port to leave in the shadows.

Look forward to a patch