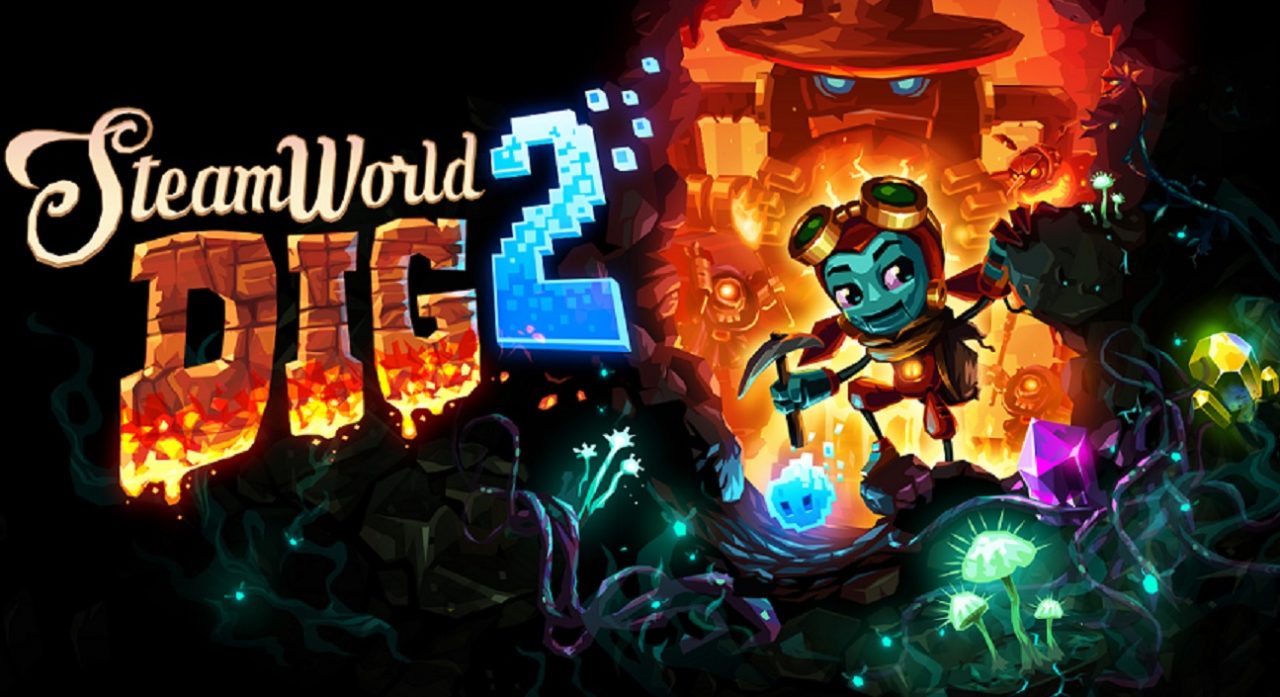 The Pure Nintendo crew are big fans of the SteamWorld games from Image & Form, particularly the newest entry, SteamWorld Dig 2. You may recall the game making the cover of PNM Issue #34. Since that time it scored a 9 out of 10 in Matt Paxton’s review, and placed third among our staff picks for Switch eShop Game of the Year. The game has now arrived on the Nintendo 3DS. How does adventuring with Dorothy and Fen fare on the venerable handheld? 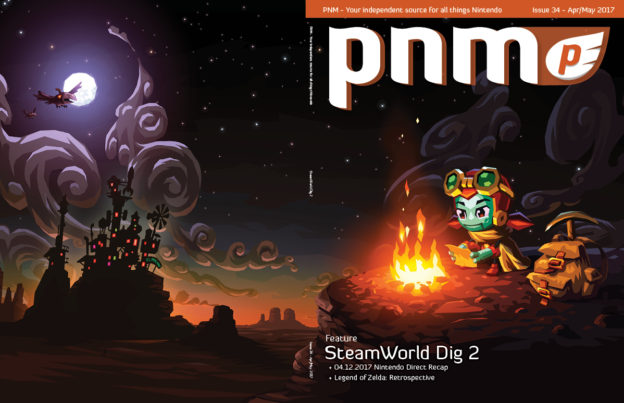 The answer is… wonderfully! I own the original title on 3DS, but it amazes me just how advanced this game is as a sequel. To quote from Matt’s original review, “Dig 2 improves on the first SteamWorld Dig in every way, from animation, to gameplay, to story.” Let’s take a moment to discuss what sort of visuals the 3DS version turns out. 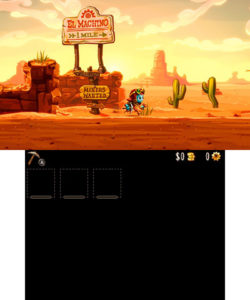 I should kickoff any graphics discussion with this disclaimer. Over the years, my appreciation for stereoscopic 3D has risen greatly. What was a novelty for me back when the system first launched is now a big asset, especially as its use had dropped in recent times. In Dig 2, I’m very pleased with how the 3D is implemented. It provides a real sense of depth and scope to the backgrounds. I liken it to a movie shot on location versus a movie shot against a matte painting backdrop. It’s definitely noticeable when not activated, and missed, so I keep the slider up most of the time. Does good 3D use compensate for lack of High-Definition visuals? It’s much closer than I would’ve thought. 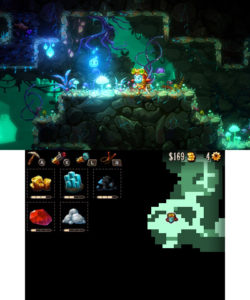 Dig 2 dazzles in many ways, but it has captivated me most with its exploration. The level design really lends itself towards discovering what’s beneath the earthquake-disrupted surface as you search for Rusty. I especially like the thrill that comes with finding secret areas and hidden artifacts. Collecting treasure never gets old (and is needed for gear upgrades) and watching the map slowly fill is satisfying.  I do wish that it tracked a completion percentage. The map is always visible on the touch screen, (as is your gold and equipment), a 3DS convenience that leaves the playfield uncluttered.

Individual preference is something Dig 2 really caters towards. The difficulty can be adjusted at any time – keep this in mind for the sections that demand precision platforming.  Map markers can be active or not, as desired. Like Matt, I too appreciate how you’re allowed to “toggle these upgrades on or off anytime”. Certain upgrades lend themselves more towards action and combat for instance. Thoughtful options like these really reflect care, and stimulate the desire for 100% completion. 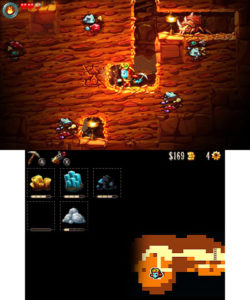 SteamWorld Dig 2 is an adventure not to be missed. It’s the sort of game that can leave you looking at your alarm clock, thinking that you should finally quit playing because you must get up in a few hours. Image & Form has crafted an excellent sequel that’s bested its predecessor in sizable ways. All Nintendo fans would do well to look at this game, either in HD or 3D, and consider adding it to their collection.

Image & Form has crafted an excellent sequel that’s bested its predecessor in sizable ways. All Nintendo fans would do well to look at this game, either in HD or 3D, and consider adding it to their collection.