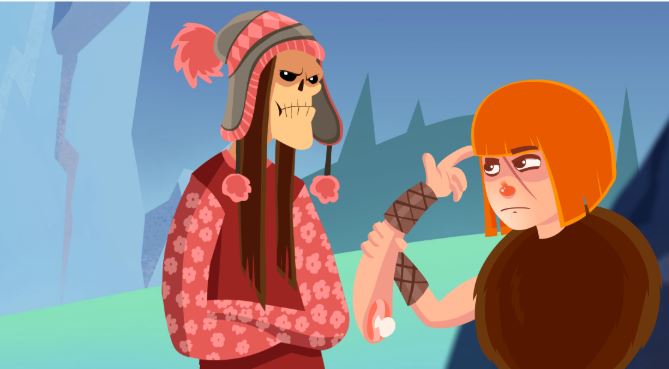 The creators of the bizarre and brilliant Manual Samuel are coming back into the game this year with their new release, Helheim Hassle.

The new game is inspired by Viking folklore, but is just as weird as its predecessor. You play as a pacifist Viking called Bjørn, whose limbs can detach and recombine in different shapes.

You go on an adventure in which you encounter a host of mythological mayhem including Norse Gods, dragons and goblins. You have to use your ability to reattach your limbs to solve puzzles along the way.

Pure Nintendo caught up with the team at Perfectly Paranormal to find out more about the new game ahead of its release.

Pure Nintendo: Tell us about your game Helheim Hassle.

Perfectly Paranomal: Helheim Hassle is a narrative adventure game with puzzle platforming bits that revolve around detaching, attaching and flinging around your limbs in a modern Norse Mythology setting. See how well formulated that was? I have practiced that line a thousand times, which is coincidentally the same amount of years that passes between when the main character dies in the viking age, to the time period the rest of the game actually takes place. It is set on the same Tuesday as Manual Samuel even though it has a Norse Mythology theme. So the whole thing has a “Norse Gods…where are they now?” feel. 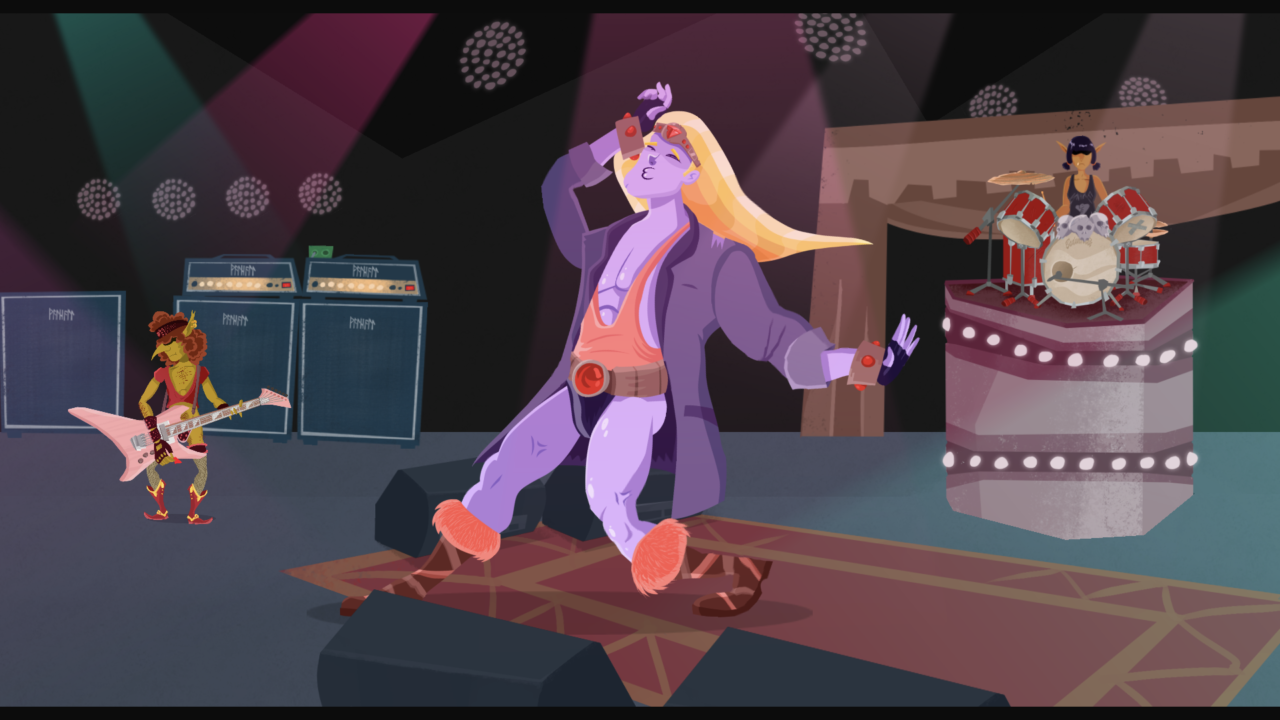 PN: What made you want to create a game about Norse mythology?

PP: We want to build a world where every legend, mythology and religion is real. In Manual Samuel we explored some biblical stuff, but being Norwegians, Norse Mythology seemed like a natural next step. We also wanna explore the hilarity that will ensue when we cross over some of these mythologies. What would happen if some of these different gods met each other? Or had a disagreement? The Tuesday Trilogy is a way for us to have this crazy and irreverent mish mash of cultures and mythologies!

PN: What kind of mythical monsters can players expect to encounter in the game?

PP: Let’s see, we tried to include the most popular gods, and some less popular ones. We also tried to -not- include some -too- popular Norse gods that you keep seeing everywhere. We also made a point out of trying to include some creatures that are only briefly mentioned in old norse legends, and giving them bigger roles in our thing.

But to cut it short, you can expect to see some popular gods, dwarves, dragons, draugs, giants, and some other creatures from scandinavian folklore. We also have a bunch of Goblins who are originally from British folklore, but we included them because…we did.

PN: How did you come up with the idea of losing and reattaching body parts as a puzzle mechanic?

PP: We wanted to make a game similar to Manual Samuel where you had to navigate your body parts, preferably one at a time, without actually making Manual Samuel again. We feel like body-stuff is starting to become a part of our brand, so who knows how we will ridicule the human body next time? PN: What is your trick to balancing out the narrative and the puzzles?

PP: Our trick is to have the obligatory puzzles as simple as possible. All they ever do is to teach you something new you can do with either your body or with the puzzle elements around you. None of them are designed to make you sit there and scratch your head for an hour. Other than that we have puzzles we call “narrative puzzles”. These puzzles are less about pulling levers or standing on buttons and more about talking to somebody or stealing a smoothie, or insulting somebody so they can kick your head in anger so it lands somewhere it needs to be.

We have a healthy balance between platforming puzzles, narrative puzzles and cutscenes. We tried to make the game in such a way that you spend equal amounts of time on each. The cutscenes are of course skippable if you’re not into that kind of thing, but the game will notice, just like in Manual Samuel.

We also have secret puzzles you can find around the world. Those can be designed to make you sit down and scratch your head for an hour so good luck with those. The secret puzzles can both be platform puzzles or narrative puzzles themselves.

PN: Between the premise and your previous work, it feels reasonable to expect this game to get bizarre. Just how weird does this game get?

PP: I see people make faces when they have to bite their own arm with their head to make a head-arm combo that can climb ladders. We could say that’s as weird as it gets but I think we’ve built up a tolerance to weirdness through the years. It probably gets weirder without us noticing, but hopefully gamers enjoy that unique and weird element in our titles. 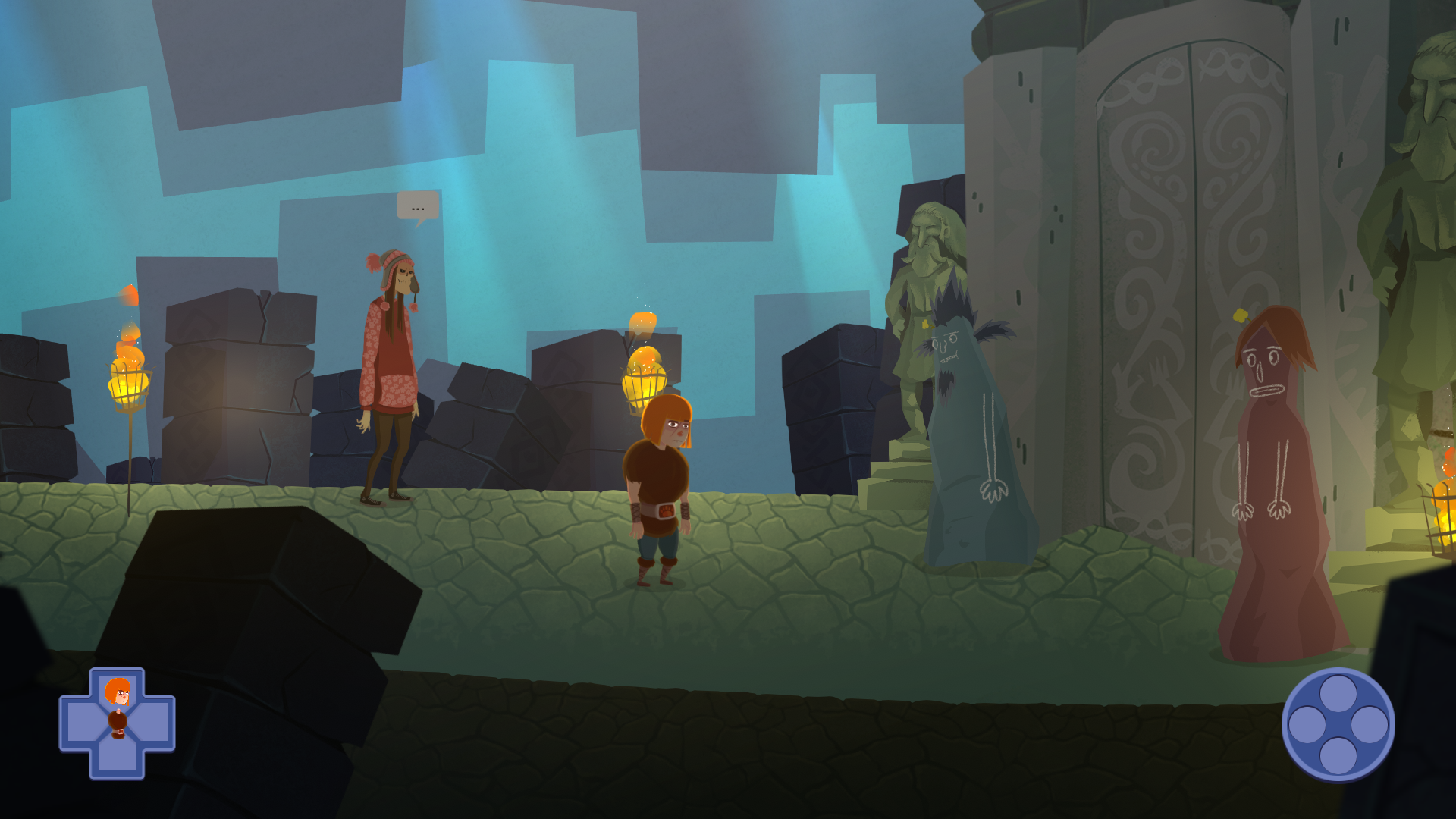 PN: How similar is this game to your last game Manual Samuel?

PP: The art style (arguably better this time), the humour, the fact that you die within the first level and get resurrected by one of the Horsemen of the Apocalypse (this is not Death contrary to popular belief) and oh yeah, the fact that you have to sometimes go through the hassle of having to steer your body one limb at a time.

Let me tell you where it definitely ISN’T similar and that’s the length. This game is about 5 Manual Samuels in one, even more if you count it in regards of content, all the secrets and all. We really pushed to make this game a with a breadth of content for players.

PN: Manual Samuel was a smash hit which currently has a 9/10 rating on Steam. How do you plan to top that performance with Helheim Hassle?

PP: By making a far superior game! (We hope it works.)

PN: What is the one most important piece of advice you can give players trying out Helheim Hassle?

PP: You can backtrack anywhere anytime you want so don’t get stuck trying to pick up a seemingly unpickable collectible. Go and unlock a leg or something and come back. Also, if something happens that confuses you, go play Manual Samuel, you might get more context there. However, those parts are brief and insignificant for the main story. Helheim Hassle is very much a standalone game.

Find out more about Helheim Hassle by visiting the game’s website here.