Mario and Donkey Kong: Minis on the Move is Nintendo’s 3DS eShop Staff Pick of the Week

Checking out the 3DS eShop shows Mario and Donkey Kong: Minis on the Move on the front page, as Nintendo’s Staff Pick of the Week.

It’s the latest continuation of a series of popular and critically acclaimed games whose origins are actually found back in 1994’s Donkey Kong  for the original Game Boy.  The first game in the series proper, debuted on the Game Bay Advance (which 3DS ambassadors have access to) as a puzzle platformer.  Nearly 20 years later, the games have transitioned away from platforming into pure puzzle affairs. 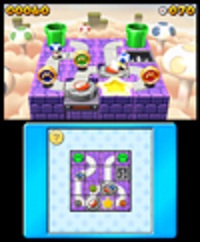 Mario and Donkey Kong: Minis on the Move has gotten mixed, but mostly positive reviews.  Praise has been given for its large amount of content, which includes carrying over the level editor from previous games in the series, and introducing new mini games.  Criticisms have been directed at the 3D effect, which, unfortunately, fails to make much of a visual impact with so much focus being directed at the touch screen.

You can check out a review of the game in the June issue of PNM, and see how it compares to its, admittedly superior, predecessors.