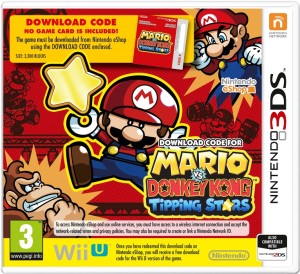 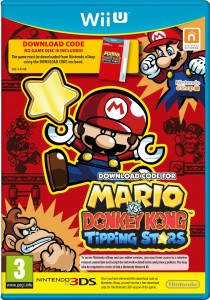 The Mario Vs Donkey Kong series has been around for quite some time. We first seen this Nintendo exclusive launch on the Game Boy Advance back in 2004 and has since then, launched on a wide verity of Nintendo handhelds and will soon come to home consoles as well. Mario Vs Donkey Kong: Tipping Stars was recently given the release date of Mar. 20 and will soon become a cross-buy opportunity for those who purchase the Wii U version of the video game.

With that said, several images have surfaced online which apparently show the European cover-art of the video game and states the title will not include a disc version of Mario Vs Donkey Kong: Tipping Stars. An internet connection is required in order to purchase and download the video game; however, a connection is not required in order to play the game. Do you think Nintendo should create a psychical disc version of Mario Vs Donkey: Tipping Stars? Let us know in the comment section below.