Marvel Ultimate Alliance 3 is a game that has been cursed by vampires since September 2019, but that curse has finally been lifted; the title will receive four additional characters on December 23, 2019. These characters are a part of the Rise of the Phoenix DLC pack included within the Marvel Ultimate Alliance 3: The Black Order Expansion Pass. The characters being added to the game are Phoenix, Gambit, Iceman and Cable. Unfortunately, Silver Surfer was not one of the characters revealed to be a part of this DLC pack. 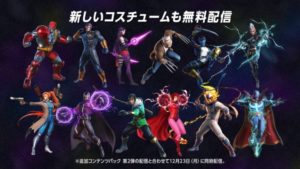 This image showcases the new alternative costumes being added to the game through a free update on December 23, 2019.

Marvel Ultimate Alliance 3’s Rise of the Phoenix also lets you face-off against friends in the newly added Danger Room mode. The Danger Room mode has you tasked with taking down enemies while being bombarded by buffs and debuffs.