I think it’s quite cool to see Aperion Cyberstorm release on the Wii U. Having said that, I recognize how the game will find a bigger audience on the Switch. To see some different (and more in-depth) coverage of that version, you can check out Dillan’s review. I’ll mainly be touching on what I feel is a possible advantage that this Wii U version offers. 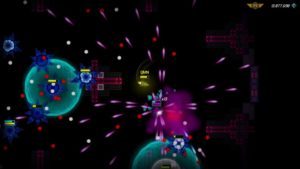 Specifically, it’s how the GamePad provides a separate viewing screen. Both versions offer support for up to five players, but on Wii U I don’t need to share the Television. True, the GamePad is not High-definition, but the game’s visual presentation is still nice enough. Maybe it’s because I’m getting older, but I like the option to play on the GamePad closer to my face when the action gets frantic. A comparable experience on the Switch would be Tabletop mode, which I’ve never actually used – that stand is so awkwardly placed.

It’s worth mentioning that Aperion Cyberstorm supports other controllers as well. If the GamePad isn’t your preference, you can use a Pro Controller, or Wiimote (with or without a nunchuck). I also appreciate options like these. If you plan on playing as a quintet, I suspect it’ll be easier on the Wii U. 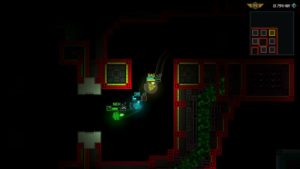 Also, what the Wii U lacks in active audience size it might make up for partially due to eagerness. Few games are releasing for the console in 2018, and even fewer of the high quality of Aperion Cyberstorm. Plus, twin-stick shooters don’t dominate the lineup in quite the same fashion they have on Switch, so that’s an advantage to standing out.

With multiple modes, hundreds of maps, co-op or competitive multiplayer, and more, Aperion Cyberstorm offers a pretty good package on either Nintendo console. Wii U players are hungry for high-quality games, so this will satisfy. Kudos to aPriori Digital for supporting a wide range of Nintendo gamers. I’ll really be looking forward to their next release.

With multiple modes, hundreds of maps, co-op or competitive multiplayer, and more, Aperion Cyberstorm offers a pretty good package on either Nintendo console. Wii U players are hungry for high-quality games, so this will satisfy. Kudos to aPriori Digital for supporting a wide range of Nintendo gamers.