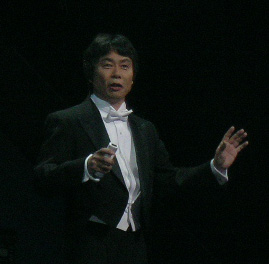 Wow, every week we hear of more and more speakers for this coming Game Developers Conference in March.  Cubed3 is reporting that the gaming legend himself, Shigeru Miyamoto (creator of Mario, Zelda, Donkey Kong, Starfox, Pikmin, among others), will be giving a keynote entitled: “A Creative Vision”.  Here’s the press release:

“A Creative Vision” marks Miyamoto’s first major talk since Nintendos release of Wii, and its smash-hit launch titles, Wii Sports and The Legend of Zelda: Twilight Princess, which all serve as examples of the design legends matchless artistic leadership. His much-anticipated title, Super Mario Galaxy for the Wii, is expected to release later in 2007.

In his keynote, Miyamoto will invite the attending developers to apply the creative process he will outline in their own distinctive styles.