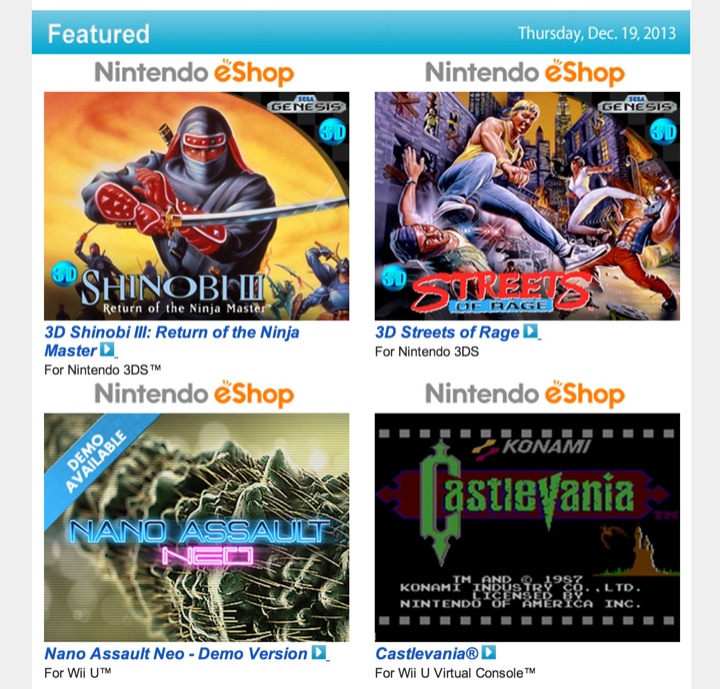 It’s the last Nintendo Download before Christmas next week, but I think it’s the calm before the storm (hopefully).  We’ve been promised Super Mario Bros. 3 before the end of the year and there’s just a couple more weeks for that to happen.  Rumor is it’ll happen next Thursday, December 26.  This week we have a couple new 3D Classics from SEGA as well as the original Castlevania on the Wii U Virtual Console.

What games are you picking up this week?

Nintendo eShop on Wii U™
Nano Assault Neo – Demo Version – Stop the deadly Nanostray virus from spreading across the nano cosmos. You are one against millions in Nano Assault Neo. Try out the demo of this amazing sci-fi-themed action game.

Virtual Console™ on Wii U
Castlevania® – Step into the shadows of Castlevania, the deadliest dwelling on Earth. Make your way through six monstrous floors filled with bats, ghosts, zombies and every kind of ghoulish creature you can imagine. Use the legendary whip Vampire Killer and a host of deadly weapons to battle your way to Dracula’s chamber and the ultimate duel of good vs. evil.

To view this week’s Nintendo Download in its full graphical version, please visit:http://news2know.net/nintendo/downloada5ew9hyt.php.