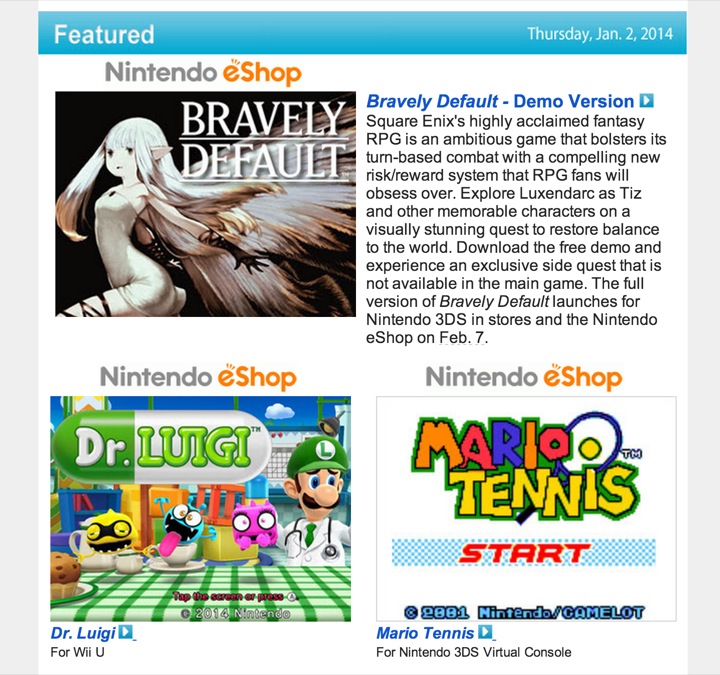 Happy New Year!  The first Nintendo Download of 2014 has some good games to choose from.  First off, the Bravely Default demo that was mentioned in the last Nintendo Direct is available today.  This demo includes an exclusive side quest that isn’t available in the full game which is available on February 7.  Also, Mega Man X2 and Mario Tennis are available for the Wii U and 3DS Virtual Consoles, respectively.

Be sure to check out the eShop on Wii U and 3DS today for some deals that are ending tonight.  Lots of good sales are going on so be sure to take a look!

Nintendo eShop on Nintendo 3DS
Bravely Default – Demo Version – Square Enix’s highly acclaimed fantasy RPG is an ambitious game that bolsters its turn-based combat with a compelling new risk/reward system that RPG fans will obsess over. Explore Luxendarc as Tiz and other memorable characters on a visually stunning quest to restore balance to the world. Download the free demo and experience an exclusive side quest that is not available in the main game. The full version of Bravely Default launches for Nintendo 3DS in stores and the Nintendo eShop on Feb. 7.

Nintendo eShop on Wii U™
Dr. Luigi™ – There’s a new doctor in the house! Dr. Mar – or, uh, Dr. Luigi is a new twist on the classic virus-popping puzzle game. Use L-shaped pills in a new game mode and compete with players locally or online. Dr. Luigi is now available exclusively in the Nintendo eShop.

Virtual Console™ on Wii U
Mega Man X2 – Guide Mega Man X through eight stages in his search to destroy the remaining Mavericks, gain their powers and uncover the secret entity guiding them all. Also, pilot powerful new vehicles like the mobile attack cycle, and, with help from the good Dr. Light, discover incredible new abilities hidden in capsules buried throughout the world. Only then will X will be ready to face his destiny as a Maverick Hunter!

Super Punch-Out!!™ – Featuring the tight game play and humor the series is known for, this sequel to the NES™ classic sees Little Mac return to the ring with the World Video Boxing Association belt once again at stake. Slug your way through the grueling, sweat-pounding matches against a cast of characters with unique patterns.

Virtual Console on Nintendo 3DS™
Mario Tennis™ – Mario Tennis offers three fun-packed modes of tennis play! Practice your swings and shots in Exhibition Mode; go on the Mario Tour, which offers three different save slots to start your very own tennis adventures; or take a break from the workout, and try your luck on some Mario mini-games.

To view this week’s Nintendo Download in its full graphical version, please visit:http://news2know.net/nintendo/downloadX5guhbfd.php.

The Nintendo eShop is a cash-based service and features games, applications and videos. Users can add money to their account balance by using a credit card or by purchasing a Nintendo eShop Card at a retail store and entering the code from the card. All funds from one card must be loaded in either the Wii U eShop or the Nintendo 3DS eShop.