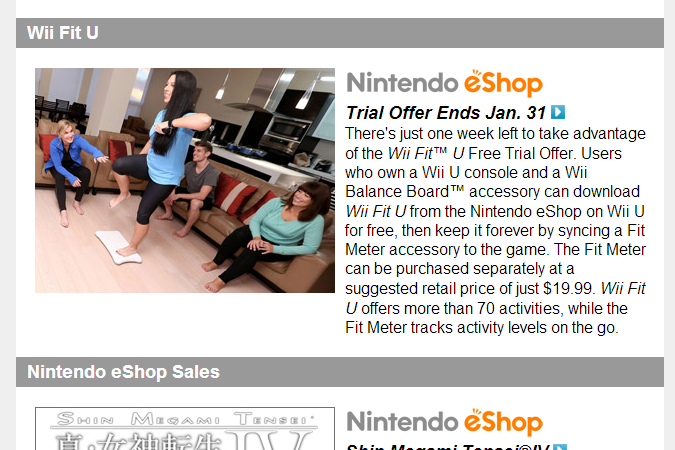 Virtual Console™ on Wii U™
Mighty Bomb Jack™ – The hero of the game, Jack, must make his way through 16 levels of a pyramid in order to defeat the demon Belzebut and rescue the royal Pamera family. Navigate through action zones and Royal Palace rooms, discovering treasure chests along the way that hold money bags and useful power-ups.

Virtual Console on Nintendo 3DS™
Life Force – Blast your way through six stages of intense action, alternating between horizontal- and vertical-scrolling environments, and take on wave after wave of enemies. You can go at it alone, or invite a friend to assist in the challenge. Do you have what it takes to save your planet from the monstrous Zelos?

Wii Fit U
Free Trial Offer Ends Jan. 31 – There’s just one week left to take advantage of the Wii Fit™ U Free Trial Offer. Users who own a Wii U console and a Wii Balance Board™ accessory can download Wii Fit Ufrom the Nintendo eShop on Wii U for free, then keep it forever by syncing a Fit Meter accessory to the game. The Fit Meter can be purchased separately at a suggested retail price of just $19.99. Wii Fit U offers more than 70 activities, while the Fit Meter tracks activity levels on the go.

Fractured Soul – Fractured Soul takes the classic platformers of the ’80s and doubles the action, with game play across both screens of the Nintendo 3DS system. Since its release, Fractured Soul has won the hearts of critics around the world. Starting today, downloadFractured Soul from the Nintendo eShop on Nintendo 3DS for $5.99 until 9 a.m. PT on Feb. 6.
To view this week’s Nintendo Download in its full graphical version, please visit: http://news2know.net/nintendo/downloadQe4gn9s7.php.