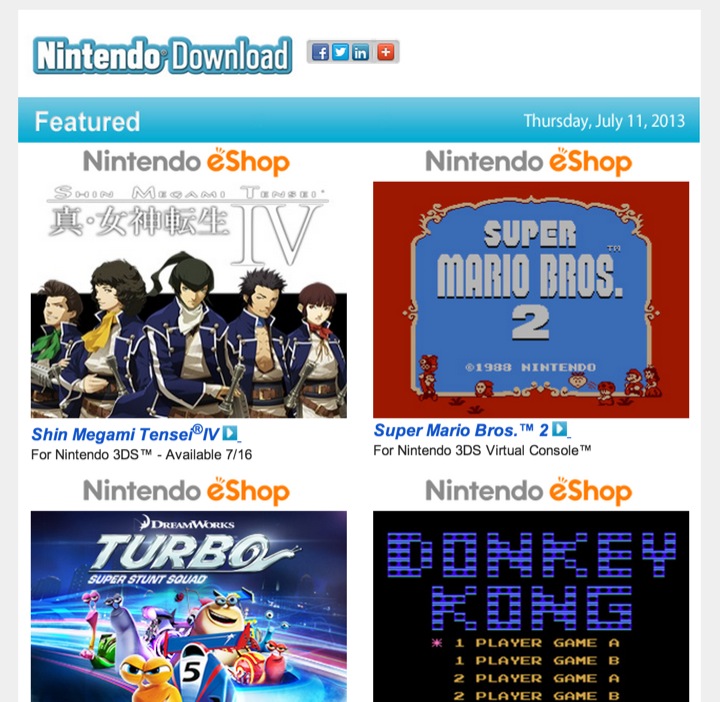 This week’s Nintendo Download is a little sparse on new Virtual Console games but there are a couple worth mentioning.  The original Donkey Kong is now available for the Wii U Virtual Console which means gamers can now play the original classic portably on their GamePad.  It’s the 7th and final game for the Famicom 30th anniversary and is only 30 cents starting July 15th.  Another NES classic, Metroid, is now available for the Wii U.  I’m sure most of you, like myself, have the game for the 3DS Virtual Console already but it’s nice to see the Wii U filling out its library.

Hopefully in the coming weeks we’ll continue to see never before released games for the Virtual Console service.

Nintendo eShop on Nintendo 3DS™
Shin Megami Tensei®IV – As the protectors of the Eastern Kingdom of Mikado, the secret order of the Samurai is tasked with defending the kingdom from a growing army of demons. The fulfillment of this duty will take them outside the kingdom and into Tokyo, and bring to light several factions with competing designs on the outcome of the world.Shin Megami Tensei®IV, the next entry in the well-received role-playing series, will be available on July 16.

Virtual Console™ on Nintendo 3DS™
Super Mario Bros.™ 2 – Mario™, Luigi™, Princess Toadstool and Toad™ embark on a quest together to save the day against the villainous Wart. In this unique NES™ classic, each of the four playable characters has a unique set of abilities: Luigi can jump higher and farther than any of the other characters, Toad can dig extremely fast and pull items out of the ground quicker than anyone, the princess is the only one who can jump and hover temporarily and Mario is an all-around character.

Nintendo eShop on Wii U™
Turbo: Super Stunt Squad™ – Get ready for some turbo-charged action with all your favorite characters from the animated film Turbo. Expert skills will prove useful in order to earn power-ups, customize your character, win competitive challenges and discover shortcuts in the dynamic, larger-than-life environments of Turbo’s world. Turbo: Super Stunt Squad™ will be available on July 16.

Virtual Console on Wii U
Donkey Kong™ – Donkey Kong has kidnapped Pauline and it’s up to Mario to come to her rescue. Help Mario ascend multiple metal structures while dodging barrels that the angry Kong hurls at him. Based on the arcade game of the same name, this classic will keep hard-core and casual players entertained for hours. Donkey Kong is the seventh and final game released on the Virtual Console for Wii U to celebrate the 30th anniversary of the Famicom. For a limited time starting July 15, the game will be available for only 30 cents.