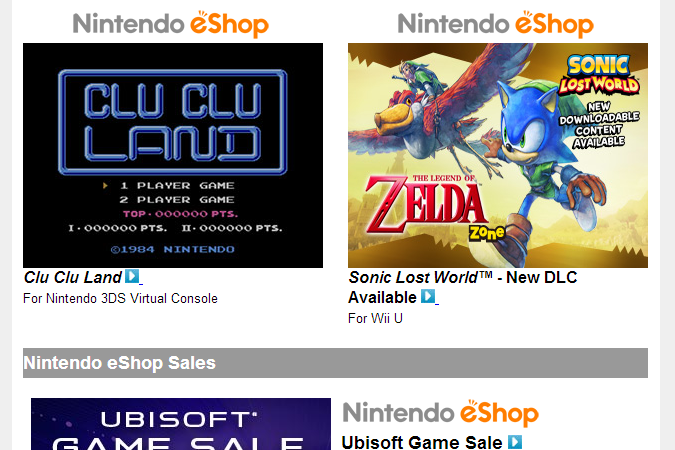 Virtual Console on Wii U
Dr. Mario – Feeling under the weather? Dr. Mario has the cure for you! Fight nasty viruses by rotating multicolored vitamins as they drop, and gain a higher score by aligning multiples of the same color. You can even try competing against a buddy to prove that you’re just what the doctor ordered.

Virtual Console on Nintendo 3DS
Clu Clu Land – The greedy Sea Urchins have stolen all of Clu Clu Land’s gold bars and buried them in a series of mazes. As Bubbles, a brave bubble fish, you’ll set out to uncover all of the gold bars in each maze. With 20 stages to complete, you might just want to bring along a friend for help.

New DLC Available
Sonic Lost World™ – New DLC for Sonic Lost World is here and it’s legendary! Available now to download for free in the Nintendo eShop on Wii U, Sonic will speed across the land adorned in Link’s iconic green tunic, as the Hero of Time himself flies on the back of his Loftwing fromThe Legend of Zelda: Skyward Sword. Players are able to use Black Bomb Color Powers to uncover secret rooms, find hidden chests and gain exciting rewards.