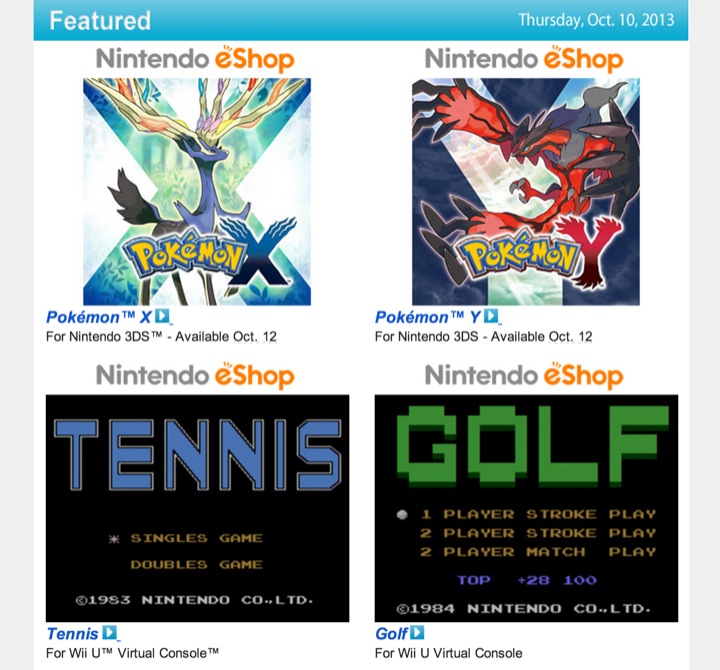 There are a few 3DS eShop releases this week but not a whole lot of big items in this Nintendo Download.  Pokemon X/Y are the featured items as they will be available for download from the eShop starting October 12th.  Classic NES games ‘Golf’ and ‘Tennis’ are also available now on the Wii U.  One cool fact about ‘Golf’ on the NES: the levels are the basis for the levels in Wii Sports Golf on the Wii.  Play ‘Golf’ on the NES and then play Wii Sports Golf to see the similarities for yourself.

Nintendo eShop on Nintendo 3DS™
Pokémon™ X / Pokémon Y – Discover new and classic Pokémon in the breathtaking new Kalos region. Train and interact with your Pokémon like never before as they’re brought to life with detailed graphics and animations. Engage in the most intense Pokémon Battles ever, enhanced by new Mega Evolutions and powerful new moves. Pokémon X and Pokémon Y will be available on Oct. 12.

Virtual Console™ on Wii U™
Tennis – In the classic NES™ game Tennis, players show off their most brilliant lobs and most powerful smashes in a singles or doubles match. Choose between five different levels of difficulty, ranging from Beginner all the way up to Advanced. Don’t lose your resolve when Mario™ sits in as referee!