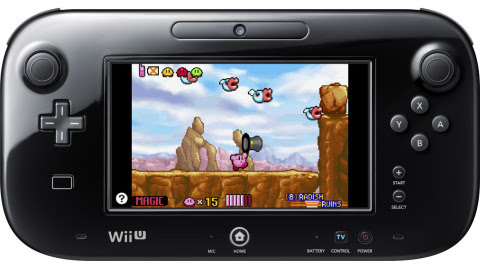 Nintendo announced new digital content for the Wii U and 3DS today.

Kirby & The Amazing Mirror – April is a month to remember with classic games launching each week! Summon Red, Yellow and Green Kirby to help you solve puzzles, fight enemies or take out the big baddies. Use copy abilities such as the arrow-shooting Cupid Kirby or the melee-master Smash Kirby, while platforming through maze-like worlds. Need a break from the action? Try mini-games such as Crackity Hack and Kirby’s Wave Ride, which also star our favorite pink hero and friends.

WarioWare, Inc.: Mega Microgame$ – April is a month to remember with classic games launching each week! Prepare for lightning-quick game play as you blaze through more than 200 bizarre microgames designed by a crazy crew of Wario’s cronies. Simple controls make each game in WarioWare, Inc.: Mega Microgame$ easy to get into … until the games start coming faster … and faster … and FASTER! Think you can outwit Wario?

Nintendo eShop on Nintendo 3DS
LEGO® The Hobbit™ – LEGO The Hobbit allows gamers to play along with their favorite scenes from the first two films in The Hobbit trilogy.

Permanent price reduction:
My Farm (Nintendo eShop on Wii U) – Starting today, the price of My Farm is being reduced from $7.99 to $4.99.

Coming soon:
Popular NES game Super Mario Bros. 3 launches for both Wii U and Nintendo 3DS on April 17. Considered by many to be one of the best games ever made, the title makes for a great way to enjoy the Easter holiday weekend and beyond.