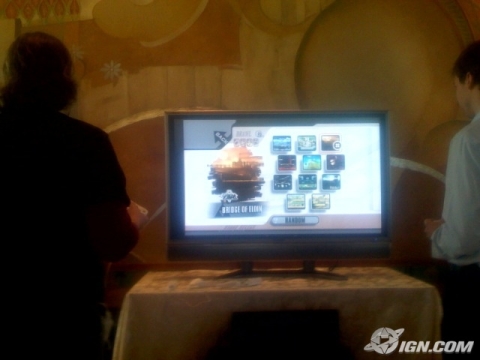 9:56 a.m.: Looks like the gameplay demonstrations are at an end and thus, so is this live blog. Look out for Smash Bros. coverage later today, but you’ll have to wait on the rest. 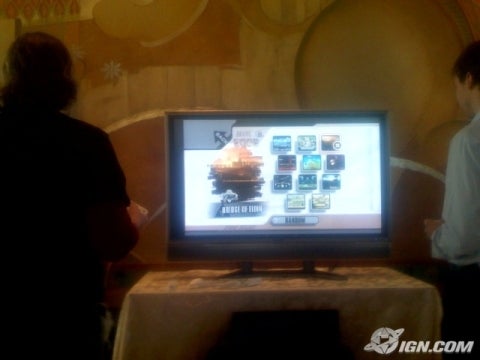 9:52 a.m.: After much procrastination, the match begins. Pikachu versus Pit versus Donkey Kong. Boz better win, or else… 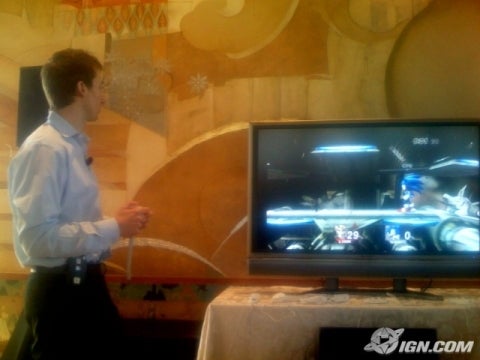 9:51 a.m.: Boz chooses Pikachu. He’s playing Chris Kohler from Wired. Whoever wins, the audience loses.9:49 a.m.: They just asked for volunteers and I politely volunteered Bozon. I also told him that if he didn’t win, he’s fired.

9:47 a.m.: Link and Sonic are now fighting in the Star Fox level. Wow. The ship is flying through wormholes as you battle. Other craft soar by in the foreground and background. Extremely gorgeous. So clean and amazingly fast with detailed particle effects exploding in every direction. The game is going to be an addiction, plain and simple. Sonic becomes Super Sonic, “which basically means he can just fly around and pummel me at will,” explains Nintendo rep.

9:46 a.m.: Wii remote held classically simplifies the controls. Move with the D-Pad. Shield attack is mapped to the B-trigger, which takes the most getting used to. 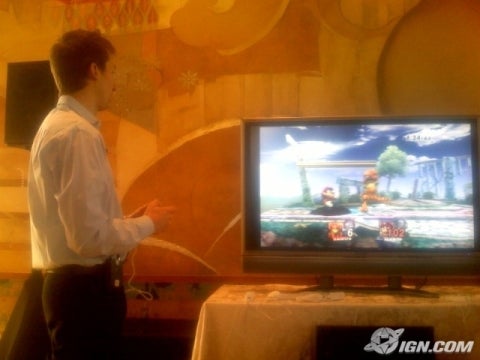 9:44 a.m.: Match is up and running with very little (maybe no) load times. Game is running 60 frames per second and full 480p widescreen. Looks really crisp, clean, sharp. Smash Balls randomly appear on-screen. They’ll float around and you’ll have to pound on them for awhile before they release their special abilities. This is demonstrated as Samus and Mario duke it out. Samus gains her special ability and blasts Mario with a super shot that fills the entire screen. Afterward, Aran turns into Zero Suit Samus. 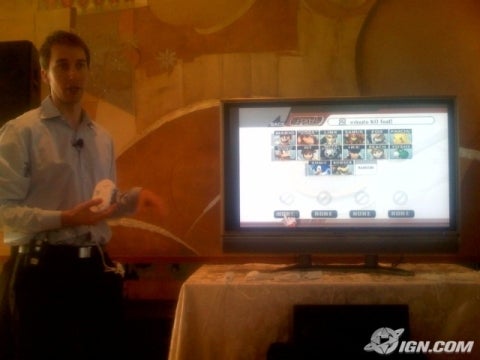 9:42 a.m.: For the purposes of today’s demoes, matches will be set to two-minute timers with items turned on. Using classic controller, you’ll use the analog stick to move. D-Pad to taunt.

9:38 a.m.: In another type of gameplay style, you actually move Link through the levels with the nunchuk’s analog stick and aim normally with the Zapper. You have full freedom of movement and can walk into any direction. Meanwhile, you can zoom in and pick off enemies from a distance, shoot boxes for upgrades, etc. When you shoot something other than an enemy, you still keep your multiplier. Again, color me pleasantly surprised. 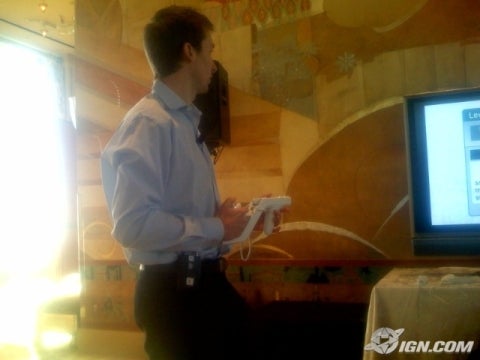 9:37 a.m.: In Stalfos Defender, you see Link in the foreground as Stalfos approach nearby. You have to shoot as many of them as you can. You can turn the screen by dragging the on-screen reticule to the left or right. Very satisfying effect as you blow the enemies apart. For a $19.99 pack-in, this is pretty impressive stuff. Indeed, looks much more fun than Umbrella Chronicles, as far as I’m concerned.

9:34 a.m.: Boots Zelda Crossbow Training. Holding Wii Zapper in both hands, Nintendo rep is ready to rock. Three different types of gameplay. Score attack. Multiplayer, etc. First stage is Ordon Target Practice. You merely shoot the targets as they pop up. Nunchuk’s z-trigger is a zoom function. The premise may not make the most sense in the world — Link isn’t exactly known for his crossbow — but whatever, this still looks pretty cool. Running on Twilight Princess engine with an identical visual style. Targets pop up around the lush green environment. You can shoot signs and pumpkins when you’re not crowssbowing targets. You can also shoot chickens, but you’ll take a point loss. D’oh!

9:31 a.m.: Shows us bonus mission. Loopdeloop Galaxy. You unlock this secret galaxy, apparently. This is a surfing challenge. Seen in previously released NCL videos. You ride a manta ray down a watery pathway, bouncing up and down as you go. Seems to have a good sense of realistic physics. Reminds me a bit of Wave Race, actually. Potential for some big jumps and air. Looks like a great deal of fun.

9:29 a.m.: As always, Mario Galaxy looks crisp and clean. This is the prettiest game on Wii to date, no doubt. Gameplay mechanics seem to be very well thought out and clever. Nintendo rep is currently fighting a mandibug boss and Mario must swing up dandelions to propel himself into the air and them butt-stomp onto the mandibug.

9:27 a.m.: “Constant sense of wonder as you’re wandering around. You really just don’t know what you’re going to see next.”

9:23 a.m.: Nintendo selects the Honeyhive Galaxy and the Big Bad Bugaboom sub-level. The bees have been taken over by these creatures called mandibugs. You have to don the Mario Bee Suit to fly and deal with the problem.

9:22 a.m.: Nintendo boots up Super Mario Galaxy. Looks like you can store at least six save files. Game is “basically” in its retail form. 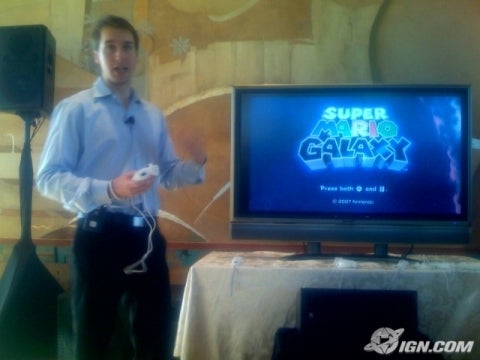 There is a cosmic observatory, which acts as your hub world. Similar to the castle in Super Mario 64. Looks very nice. Same hub we’ve seen in the previous official trailer. Nintendo takes Mario into a terrace, where multiple different galaxies can be selected. “As you get more and more stars, you will be able to illuminate more of the areas and be able to access them.”

9:21 a.m.: About an hour of live demonstrations coming. Then we’ll be able to play games today and tomorrow. Looks like Super Mario Galaxy demonstration is going to begin.

9:20 a.m.: “Best game coming for the holiday is Super Mario Galaxy.” Can’t really argue with that.

9:17 a.m.: Been making more Wii systems. Demand continues to surprise Nintendo. Consumers will still have to “hustle” to find the system this year. Will have about two times the product they had last year.

9:16 a.m.: Smash Bros. will have full Wi-Fi multiplayer capabilities. Lots of new levels and many new characters, including Sonic the Hedgehog. A “unique way of sharing between users, even online,” according to Iwata — this relates to some user-created content for the WI-Fi service in relation to Smash Bros., sounds like. 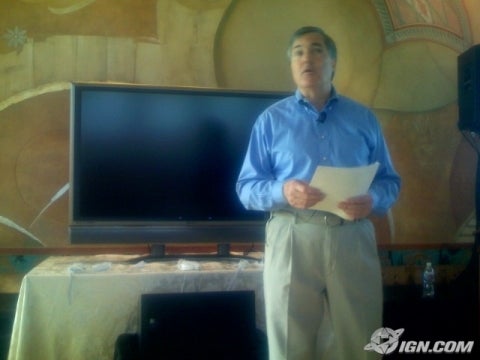 9:14 a.m.: NOA’s George Harrison takes the podium. He’s going to give us an update, he says. We get to play for the “first time” Super Smash Bros. Brawl, Link’s Crossbow Training, Battalion Wars 2, Mario Party DS, Advance Wars 2 and Master of Illusion. We’ll also get an updated look at Galaxy.

9:10 a.m.: Oh. I just got an update. Evidently I can live blog about everything we see here. I just can’t post official hands-on impressions until Monday. Weird, but I’ll take it. With that in mind, here’s the schedule: At 9:15, Super Mario Galaxy demonstration. At 9:30, Link’s Crossbow Training demonstration. At 9:45, Smash Bros. demonstration. At 10:00 a.m., open gameplay. At 12:30, lunch. And then more open gameplay for the remainder of the day, methinks. Everything except Smash Bros. Brawl will go live on Monday, media included, I presume. 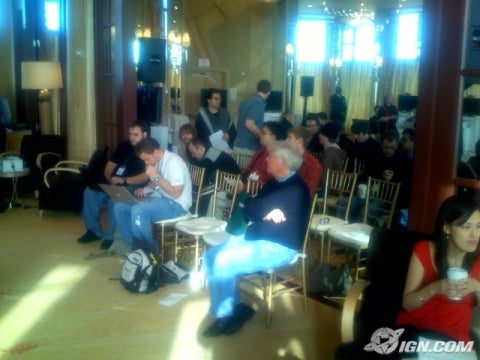 9:08 a.m.: Our video crew is setting up. We just got an embargo sheet. Looks like there definitely will be a Brawl demonstration starting at about 9:45 a.m. There are other demonstrations, too, but because of the embargo, I’m not entirely sure that I can mention them. Also, I’m getting the impression that Nintendo will be blasting the wire with news in the next hour and a half, if not earlier. Brawl delay? Pure speculation at this point. Maybe it’ll be just the opposite. Like I said, I’m still a little out of it.

9:03 a.m.: Bozon has returned from doing absolutely nothing. Hurray! Good for you, Bozon.

9:02 a.m.: Evidently we’re only able to film a combined five minutes of gameplay footage for each game. However, we will also be able to film gameplay demonstrations in full. Of course, you should note that we can only post Brawl stuff today. The rest will have to wait until next week. I apologize in advance, but don’t shoot the messenger.

8:53 a.m.: Still sitting here and wondering where the hell my editors are. I think Bozon has moved beyond cookies and to full-blown breakfast. Do these people realize a major event is about to start?

8:52 a.m.: There is still some confusion about what I can and can’t write about, and what we’ll be able to show you in video and screenshots. Apparently, everything except for Super Smash Bros. Brawl coverage will be under embargo until Monday. But we will, according to what I’ve heard, be able to film a Brawl presentation and write in detail about the fighter today, which sounds fantastic.

8:49 a.m.: I’m sitting in the front row, waiting for this sucker to kick off. Editors Craig Harris and Mark Bozon are eating cookies. We’ve all gathered on the thirty-second floor of a major San Francisco hotel to see updated looks at major “Q4” games. This includes Wii and DS software, of course. It should be pretty exciting. I’m just back from New York, where I’ve been out of reach for the last week-plus, but even I had a chance to see the announcements from Japan yesterday and I’m sure similarly interesting unveilings will be mirrored here in our side of the sea.