Retro infused videogames are anything but uncommon in this day and age, especially when nostalgia is placed into the videogame as the ace in the hole. While Tic Toc Games’ latest creation, Adventures of Pip, possesses a hint of the old guard, it doesn’t focus of swaying the player into thinking he or she is taking a trip down memory-lane. Instead, the implementation of retro inspired figures would best be described as well blended scenery. While Metroid callbacks add a nice touch to the experience, Tic Toc Games acquires an old genre and turns it into something new, something I would definitely like to see more often.

The story begins with a kingdom under attack by a malicious queen who only wishes to take over the land. During her efforts, the evil queen turns most of the kingdom’s inhabitances into pixilated figures and kidnaps the princess. As generic as it sounds, the videogames hero, Pip, is the only one who could save the day and thus your adventure begins.

The videogame falls flat in regards to the story but certainly picks up elsewhere. For instance, the protagonist can manipulate his body in three different ways. The first form of change is turning into a pixel, then an 8-bit character and eventually a 16-bit hero. The constant change between forms felt refreshing and adds a clever dynamic to the videogame. While manipulating Pip’s body was a must in some instances, it kept the experience fresh and far from being mundane. I have to admit, morphing was fun to do, but changing the characters appearance would be nothing without the videogames puzzles and platforms. 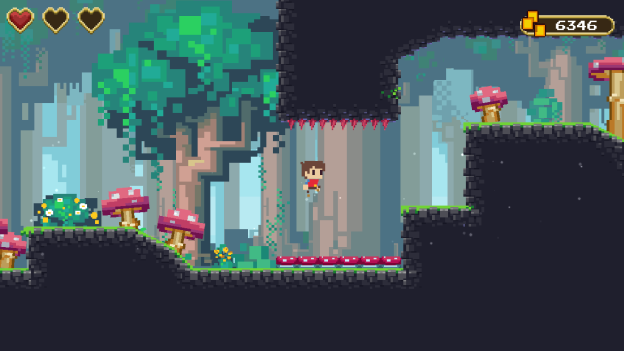 In 1985, Super Mario Bros. set the standard in regards to platforming videogames, Adventures of Pip, raises that bar to an elevated degree. The puzzles and levels in Adventures of Pip are creatively designed to make the individual think and react to the environment intuitively; first you’re wall jumping like Samus, then exploding into a pixel and suddenly gliding towards a particular area. Moments like these felt similar to Super Mario Bros. 2 and accomplishing these feats are just as rewarding as the 1987 Nintendo game. While far from being conundrums, puzzles are simple to complete in this title and happen to be implemented as a necessary means for level progression. This adds flavor to the stage and acts as a necessary fork in the road, without it, players could easily gun-it towards the end of the stage and become bored rather quickly.

Adventures of pip, looks and plays like a Super Nintendo game, which means to say it looks and plays great. Even with an aesthetic resemblance to games of the 90’s, Tic Toc Games created a title worth playing with very little problems. Although puzzles are simple and close to no-brainers, platforming takes the reins in regards to critical thinking and dumps the player into a creative, yet, immersive experience. Though relatively short, Adventures of Pip sets itself apart from the typical retro infused catalog and provides an nostalgic experience without a heavy emphasis on the past.